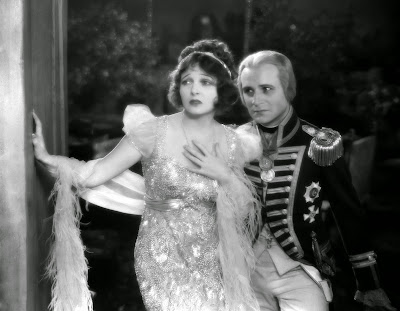 The idea of star-crossed lovers has always had a great deal of appeal. Say what you will about the sighing and mooning over each other, if you can make that plot believable, you’ve got a built in audience. The Divine Lady adds a historical element to the idea of lovers separated by circumstance, telling the story of one of England’s greatest military heroes. The war takes a back seat to the romance, though.

Emma Hart (Corinne Griffith) is the dissolute daughter of Mrs. Hard (Marie Dressler), recently hired as the cook for an English noble named Charles Greville (Ian Keith). Greville is scandalized by Emma’s evident sauciness and refuses to let her in his house. Despite her wantonness, Greville relents when she promises that she will work for him and attempt to learn to behave in a more proper and fitting manner.

Greville is naturally attracted to Emma, but her inherent vulgarity is always at risk of scandalizing him. On a pretense, he sends Emma off to Naples to live with his uncle and receive lessons on how to be a true lady. In time, Greville’s uncle Sir William Hamilton (H.B. Warner), who happens also to be the English ambassador to Naples, marries Emma, making her Lady Hamilton and a figure in the court at Naples.

Meanwhile, war is brewing on the continent and tensions between France and England run high. There is real pressure on Naples during the conflict, since any overtures of friendship to one country will almost certainly invite a declaration of war from the other. Lady Hamilton, acting on behalf of her husband, meets with a British naval officer named Horatio Nelson (Victor Varconi). The two are immediately attracted to each other. Nelson goes off to war and becomes, well, Admiral Nelson, the hero of the British fleet.

Things eventually come to a head in the war. Nelson’s troops are dying of scurvy and are desperate for provisioning, but the court at Naples will not allow the ships to dock for fear of French reprisal. Emma, acting as a loyal British citizen, convinces the queen of Naples—a relative of the recently decapitated Marie Antoinette—to open the ports to the British and allow the ships to take on supply. This essentially saves the fleet and allows the British to be victorious in the Mediterranean. After the battle, Nelson comes to stay in Naples and the forbidden romance between the married Emma and the married Nelson blooms.

But news of the forbidden love travels fast, and despite his military victory and Emma’s role in that triumph, the rumors of their secret and forbidden love put the pair in a delicate situation in the English capital. This was compounded by the rapid decline in Nelson’s marriage to his wife Fanny. After some blissful time spent in each other’s company Nelson and Emma are foreer parted when Nelson is forced to return to the sea for the Battle of Trafalgar where his forces routed the French navy at the cost of Nelson’s own life.

And really, that’s the whole movie. There are a couple of decent naval battle scenes, but the bulk of the film concerns this forbidden romance between Admiral Nelson and Lady Hamilton. As such, the film takes its own sweet time getting started into anything remotely interesting. The naval battles are actually quite good for the time and are interesting to watch because of it. A great deal of the rest is all of that mooning and sighing between our two principle characters.

It’s important to remember that silent were still being made after the release of The Jazz Singer and the Divine Lady is a silent film except for a few moments when it appears that some music on the soundtrack is matched by what appears on screen. I have no idea if what we are hearing is actually Corinne Griffiths singing in a few spots, but it ultimately doesn’t really matter. What we do get is the love between the two.

For what it’s worth, The Divine Lady isn’t bad. It’s just also not that good. I suppose it was fine for its time, but other than director Frank Lloyd winning for his work on this film, there’s not much here to recommend it. You’re missing nothing if you never see it. In fact, you’re not missing much if you never hear of it again.

Why to watch The Divine Lady: The battle scenes are surprisingly good.
Why not to watch: Silent dramas are always a hard watch.