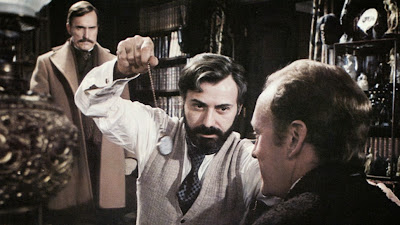 I can’t call myself the world’s biggest Sherlock Holmes fan, although I did name my dog after one of Doyle’s books. (My dog’s name is Baskerville if you’re playing the home version of my trivia game.) I feel about Holmes roughly the way I feel about, say, Star Trek. I’m enough of a fan to follow it and know the main players, but it’s nothing I particularly seek out. I was interested in The Seven-Per-Cent Solution mainly for the cast, which includes Robert Duvall and Alan Arkin. Now that I have a little time away from work (first time in months), I can work a little more with interlibrary loan, which is why I ordered this one for today.

This, it should be noted, is not a story by Arthur Conan Doyle, but Nicholas Meyer using Doyle’s characters. It’s kind of a two-part story. The first half deals entirely with Holmes and the second half with a case that arises suddenly. Despite this, the film doesn’t feel disjointed. Events of the first half creep into the second, and the narrative actually works despite there being two legitimate conclusions.

The issue with Sherlock Holmes (Nicol Williamson) is that he has succumbed more and more to his cocaine addiction, the eponymous seven percent solution of cocaine to saline. During his cocaine rampages, he fulminates against Professor Moriarty (Laurence Olivier), who Holmes believes is a criminal mastermind. Holmes’s friend Dr. John Watson (Robert Duvall) learns that the problem is truly serious when Moriarty shows up at his house. It seems that many years ago, Professor Moriarty was the math tutor of Sherlock Holmes and his brother Mycroft (Charles Gray). For some reason, Sherlock has determined that the man is a criminal genius despite the man’s evident innocence of anything.

Desperate to get treatment for Holmes, Mycroft and Watson arrange for Moriarty to vacation on the continent. Through all manner of trickery, they conspire to get Holmes to the residence and offices of one Sigmund Freud (Alan Arkin). Yes, that Sigmund Freud. The next chunk of the film consists of Holmes making a couple of his famous deductions, being hypnotized, and going through terrible withdrawal symptoms. Once completely off the cocaine, Holmes becomes despondent and close to catatonic. It is only by sheerest luck that a case falls into his lap and gives us the second half of the film.

Lola Devereaux (Vanessa Redgrave), a former cocaine addict patient of Freud’s, has escaped a kidnapping. She had been held for days and dosed with cocaine, renewing her addiction. She remembers a few details, which set Holmes, Watson, and Freud, who is Holmes’s match in deduction skills, off on the chase of her ultimate captor. In truth, since we’re really only given one potential adversary, it’s hardly a spoiler to say that the bad buy is Baron Karl von Leinsdorf (Jeremy Kemp), assisted by his kidnapper Lowenstein (Joel Grey). It all concludes with a pretty entertaining train chase (that’s two days in a row for me), a duel between Holmes and the Baron on top of a train and—for me this is worth the price of admission on its own—Sigmund Freud playing the part of an action hero.

Sound ridiculous? It kind of is, but it all works. And despite what it sounds like at the end, it’s not a comedy. There are certainly some comedic moments, but most of this is played straight, including Freud jumping from train car to train car near the end. Because so much time is spent on Holmes’s cocaine addiction, the mystery part of the story is given short shrift, which is too bad because it could make a movie on its own. Sherlock Holmes fans show up for the deductive brilliance, and all of this is spun through a short cut to get us to the ending. It’s a little disappointing in that respect.

In another mild disappointment, Robert Duvall is here almost strictly as window dressing. Watson has very little to do in this story. In most of the Holmes novels, Watson is there to make really bad guesses and assumptions and do some of the heavy physical work. Here, we don’t even get that, and Watson is just there to guarantee that this is a Sherlock Holmes story. No, all of the action and most of the mental gymnastics come from Nicol Williamson (who makes a very good Holmes) and Alan Arkin (who makes an awesome Freud).

This is a difficult film to recommend. I enjoyed watching it quite a bit, but it’s also a film that I can easily see others finding dull or simply tonally weird.

Why to watch The Seven-Per-Cent Solution: Sigmund Freud as an action hero. You need more?
Why not to watch: The tone is weird at times.