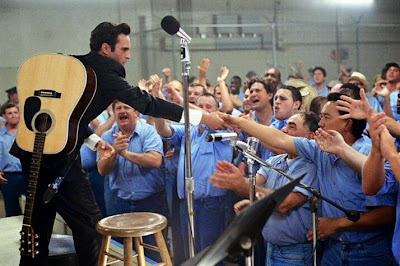 I don’t like country music as a rule. More specifically, I don’t like the modern brand of “I have a pickup truck and my woman left me, but God bless America” country music. That said, Johnny Cash was pretty damn awesome. Like his music or not, the guy wrote some pretty damn good songs. I happen to be a big fan of Warren Zevon, and Zevon had the same songwriting style in a lot of ways. My appreciation for Saint Warren is the most likely reason that I appreciate Johnny Cash. So I was happy to revisit Walk the Line today.

This is, more or less, the story of the most interesting and tumultuous years of Johnny Cash’s life. We start just before Cash’s legendary performance at Folsom Prison. A table saw in the workshop sends Johnny Cash (Joaquin Phoenix) into a revere that will last us for most of the film. We flash back to his childhood and the death of his brother as well as the difficult relationship he has with his father. We jump forward to Cash joining the army and buying himself a guitar in Germany. Jump ahead a few more years and Johnny Cash is working as a salesman and is married to his first wife, Vivian (Ginnifer Goodwin).

Wanting more than anything to break into the music business, Johnny puts together a band with a few friends. One morning, the trio auditions for the head of Sun Records. They first try to get a contract singing gospel and spirituals, but are told there’s no market. Desperate, Cash starts playing Folsom Prison Blues, and before we know it, the band is signed and on tour through the South with Jerry Lee Lewis (Waylon Payne), Elvis (Tyler Hilton), and June Carter (Reese Witherspoon).

Johnny soon falls desperately in love with June Carter, which is a problem since both of them are married to other people. June rejects his advances, and slowly, Johnny slips into alcohol and drug addiction. This creates a rift between the pair that comes to a head when Cash collapses on stage in Las Vegas. Eventually, Cash’s marriage to Vivian collapses, an event that is sped forward by his arrest for bringing a quantity of pills across the border from Mexico. Following a disastrous Thanksgiving where he continues to fail to disappoint his father (Robert Patrick), Cash cleans himself up and goes back on the road with June.

The concert at Folsom happens when Cash realizes that a good portion of his fan mail comes from men behind bars. His record company doesn’t like the idea of a live concert at a prison, but Cash goes anyway, taking us back to the beginning of the film. The short epilogue more or less concludes the story of the relationship between Johnny Cash and June Carter.

The story here is nothing new regardless of its accuracy with the facts of Johnny Cash’s life. When the tale is one of rise and fall and rise in the music business, particularly a story that features the drug and alcohol abuse that Walk the Line does, there are really only two possible stories. Either our main character beats the addiction, cleans up, and ends up back on top or the addiction beats him. Since the bulk of this story takes place in the 1950s and 1960s and Johnny Cash lived until 2003, where this one goes is evident.

Because of that, the success or failure of Walk the Line depends almost entirely on the performances on the screen. Reese Witherspoon won the Best Actress Oscar for this performance, and far be it from me to suggest that she shouldn’t have been nominated. I’m honestly not that familiar with June Carter, but the performance here is a convincing one. While she is central to the film, it’s really Joaquin Phoenix who sells the film.

There are a lot of things that could be said about Joaquin Phoenix. He might be strange, erratic, mildly insane, or anything else. He does lose himself in roles, though, and I mean that in only the best way. Phoenix’s real success in this film is matching Johnny Cash’s particular vocal quality and style. The songs are really well performed, and Phoenix and Witherspoon did their own singing and playing.

I like this film a lot. The story is nothing new, but watching the story unfold is really special, as is the music.

Why to watch Walk the Line: Johnny Cash was badass.
Why not to watch: If you can’t stand Cash’s music, you’ll have a tough sit.