Film: The Keys of the Kingdom
Format: Streaming video from NetFlix on The Nook. 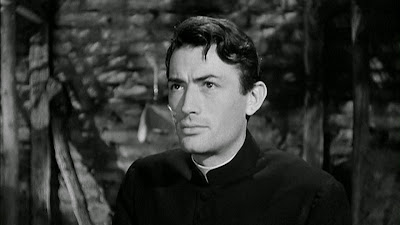 Hyper-religious movies were a lot more popular back in the day than they are now. They were also quite a bit more theologically interesting than the current religious films as well. I don’t have a great deal of interest in modern religious cinema because so much of it seems geared toward people who aren’t very knowledgeable about their own faith. Older films, while just as prone to piling on the Jesus, tended to at least be smarter about it. A case in point is The Keys of the Kingdom, which also happens to be Gregory Peck’s breakout role.

It doesn’t take more than a minute or two to realize that this film is going to be the story of the life of a priest. We meet that priest, Father Francis Chisholm (Gregory Peck) in something close to his dotage at a small church in Scotland. Chisholm, we soon learn, has always been something of a rebel in the church, making statements that seem radically un-churchlike and bordering even on the blasphemous. The church has sent a local monsignor (Cedric Hardwicke) to more or less force Father Chisholm to retire, thinking that that would be better for the church as a whole.

The monsignor spends the night in Chisholm’s room, and discovers Chisholm’s journal on a bookshelf. He begins reading it, and thus we’re going to spend the rest of the film in flashback. We learn that Chisholm came from a Catholic father and Protestant mother, and that his father in particular was little loved in his native Scotland because of his faith. His parents are killed in a freak accident, and young Francis goes to live with an aunt. We jump forward to Francis at college. He is being pushed toward the seminary, but is also in love with Nora (Jane Ball). During his last year at school, Nora convinces herself that he won’t be coming back, gets herself pregnant, and dies soon afterward. With no Nora to return to, Francis becomes a priest.

We return to Francis Chisholm after his two first failed attempts in parishes. He is next sent to China to build and maintain a mission there, essentially with no help from the church itself. He has a rough go for some time, having only one assistant, a convert named Joseph (Benson Fong). Things start to turn around when he is sent medical supplies from his atheist doctor friend Willie Tulloch (Thomas Mitchell). Chisholm saves the life of the local high official named Chia (Leonard Strong). In gratitude, Chia gives Chisholm new land, servants and money to build a real church.

Nothing comes easy, though. A group of nuns led by Reverend Mother Maria-Veronica (Rose Stradner) arrives and takes an immediate dislike to Chisholm. This is not abated when Willie shows up to help out despite his evident and frequently mentioned atheism. Eventually, just as things are turning around, revolution in the country devastates the area and the mission, killing Willie and destroying the church. Shortly thereafter, the mission is visited by Angus Mealey (Vincent Price!), an old friend of Chisholm and now much higher ranking in the church. Mealey disagrees with everything in how Chisholm runs his mission, displaying a lack of understanding and arrogance that ultimately makes Maria-Veronica see just what sort of man Father Chisholm really is.

And we get a little more reminiscence as old age creeps in and eventually Chisholm is returned to Scotland for his own good, and since that’s where we showed up in this film, it’s also where we end and where I’ll put a stop to this recap. There’s actually quite a bit that I left out, but the preceding paragraphs are the broad strokes.

It’s to be expected that a film like The Keys of the Kingdom will be heavy-handed in its religious message, and it is. It is also to be commended, though, for having a character who remains an atheist to his dying breath—no deathbed conversion here—and having that character as one of the best in the film. It was actually refreshing to see an atheist depicted in a positive light, something that would almost certainly never happen in a film of this sort made today. As much as I expected this to be a hard ride, I was pleasantly surprised at how this was handled.

And so, what we have is a film that is religiously complex. Father Chisholm is a character of great integrity. When Mr. Chia offers to convert to Christianity in payment for the life of his son, noting that this would cause many others in the area to convert as well, Chisholm denies him because his conversion (and those of the other people) would be for the wrong reasons. There are moral complexities here as well, particularly when Chisholm gets personally involved in the warfare around his mission and could be held responsible for the deaths of nearly three dozen men.

Gregory Peck, of course, is great. He always was. There are moments when the makeup looks fairly convincing when is playing the older version of Chisholm; there are also moments where it looks like they simply dyed his hair and did nothing else to make him look old. But really, this is for a short period in the film. Most of the time, he just looks like a young Gregory Peck, and he plays this role earnestly and with a great deal of conviction. It’s what the role needs—someone with these particular beliefs needed to be played by someone willing to take on the role completely.

I can’t say I’d jump at the chance to watch this again, but based on what I thought I was getting myself into, I’m pleasantly surprised that it’s as good as it turned out to be, despite the religious fervor quietly evident throughout. Mostly, it works because while the religion is evident, Father Chisholm never once forces it on anyone--he just lives it.

Why to watch The Keys of the Kingdom: Gregory Peck was great in whatever he touched.
Why not to watch: It hits hard on the religious sap.

Email ThisBlogThis!Share to TwitterShare to FacebookShare to Pinterest
Labels: Best Actor, drama, John M. Stahl, The Keys of the Kingdom