The Piper Advanced and the Children Followed

Film: The Pied Piper
Format: Video from The Magic Flashdrive on rockin’ flatscreen. 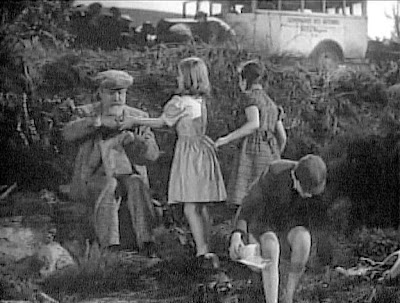 I choose movies to watch on a given day for a variety of reasons. Sometimes, depending on my day, it comes down to length. I’ll watch a short one on a busy day and a long one on a day where I have much less to do. Sometimes, though, it comes down to the year and particular awards the film was nominated for. With The Pied Piper, it was a blend of this. I was extremely busy today and this film was available to me. Additionally, it was nominated for Best Picture in 1942, a category where I have a lot of work to do.

I knew absolutely nothing about this film going in. The title only makes sense after the opening couple of scenes. It has nothing to do with the old story about the man removing rats and then children from the town of Hamelin. No, this is a war tale that doesn’t have a great deal of war in it, at least in terms of our main characters. We have an older British gentleman named John Sidney Howard (Monty Woolley) who is currently in France despite the advancing Nazi war machine. We learn soon enough that he has fled England because despite his desire to help in the war effort in any way possible, he is repeatedly told that he is too old to be of any use. We also eventually learn that he has lost a son who flew for the RAF.

Mr. Howard is staying at a country house with a traditional nuclear family—mother, father, son Ronnie (Roddy McDowell) and daughter Sheila (Peggy Ann Garner). As the Nazis approach, Howard decides that it is time to give up his pride and return to London to do everything he can for the war effort. The children’s parents persuade him to take the kids with him. He reluctantly agrees despite claiming to dislike Ronnie in particular.

So off they go, and suddenly there are three children. There are the two he started with and Rose (Fleurette Zama), an orphan suddenly along for the ride. When their bus to the coast gets a flat and is strafed by the Luftwaffe, Howard picks up a fourth child. This is the mute Pierre (Maurice Tauzin), whose parents died in the strafing.

Eventually, Howard leads the children, suddenly including a fifth—a dutch boy named Willem (Merrill Rodin) to friends he met on a previous vacation. Nicole (Anne Baxter), once romantically involved with Howard’s son agrees to help the motley crew to the English Channel where she has a relative who can help them get across and home. However, in occupied territory, speaking English has dire consequences, and before too long, Howard, Nicole, and the group of children run afoul of Major Diessen (Otto Preminger) who believes Howard to be a spy and the children to be a unique cover story.

The Pied Piper is an interesting idea for a film, and it’s impressive that this appeared a few months after the Attack on Pearl Harbor, making it one of the first real propaganda films to show up. There are some strange messages here, though. For all of his presumed anger and evil, Major Diessen has a few moments toward the end that humanize him, and similarly point to the evils of the Nazi regime long before the reality of the Holocaust was known outside of occupied territory. Monty Woolley is also a very odd hero for a war film, as he was in his late fifties when the film was made.

The real issue with the film is that even with its short running time, it feels like not nearly enough happens to fill it. We spend a lot of time at the start setting up the story and then everything happens very quickly, but not much actually happens. It feels like it needs more in it, and it needs to take longer for it to happen. It’s a very strange thing in that it both feels too long for the story it tells and not long enough for the story it wants to tell.

The Pied Piper is not a bad film by any stretch. It has some very nice moments, particularly the growing and evolving relationship of Howard and young Ronnie. It simply doesn’t feel substantial enough to be more than the curiosity it is, though.

Why to watch The Pied Piper: A very different war story.
Why not to watch: It goes by very quickly without a great deal happening.