Film: Death at a Funeral (2007)
Format: Streaming video from Hoopla Digital on The Nook.

This is the third in a series of twelve films suggested by Chip Lary at Tips from Chip. 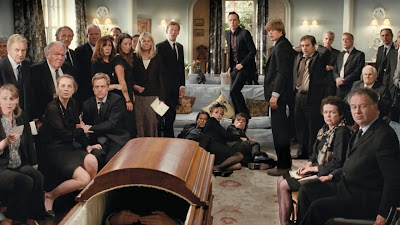 Funerals suck. Like most people, I’ve been to my share of them and I’ve been a pall bearer enough times that I don’t look forward to any of it. Funerals, it has been said, are for the living and I think that’s true. In the case of Death at a Funeral, the funeral is very much for us, the audience. This is a very good example of the genre of comedy in which everything goes wrong at the same time with ridiculous and often hilarious consequences.

It’s worth saying right off the top that this is a genre that is very difficult to do well. Too much insanity and the film spins out of control. Not enough, and there’s not enough humor to warrant watching the rest of the film. Make things too improbable and it’s not believable enough to make watching worth the time. To work as well as it can, a movie like Death at a Funeral has to walk a knife edge, keeping the humor happening and upping the ante at just the right pace to keep things understandable, funny, and consistently moving. And for what it’s worth, I think it helps that it’s British in this case. There’s something about British comedy that pulls all of this together.

However, because there’s a lot going on, a cohesive plot summary is nearly impossible. What we know at the start is this—a man has died, and the funeral home has managed to bring the wrong body, starting things off on the wrong foot. Essentially in charge of the funeral is Daniel (Matthew Macfadyen), son of the deceased. Assisting him is his wife Jane (Keeley Hawes), who is also pressuring him to get an apartment London. For ease, the rest of the plot is best handled in bullet points.

• Also in attendance is Robert (Rupert Graves), Daniel’s successful novelist brother, who has flown in from New York. Despite being far wealthier and more successful than Daniel, and despite promising to pay for half of the funeral, Robert is reneging, citing the cost of his first-class ticket.

• Friend of the family Howard (Andy Nyman) is a hypochondriac and germophobe. He is attending with Justin (Ewen Bremner), who had a one-night stand with Martha (Daisy Donovan) and would like to have another. These two are bringing Uncle Alfie (Peter Vaughan), an old man in a wheelchair who considers anyone not paying attention to his immediate needs to be worthless.

• Martha is bringing her boyfriend Simon (Alan Tudyk), who is desperately nervous about meeting her family, particularly her father, Victor (Peter Egan). Martha attempts to calm Simon down by giving him a Valium, not knowing that it is actually a powerful hallucinogenic cocktail created by her brother Troy (Kris Marshall), who is a pharmacy student. The drugs start to kick in on the way to the funeral.

• We also have the arrival of Peter (Peter Dinklage), of whom no one knows. As it happens, Peter has photographic proof of his identity as the dead man’s lover, and he’ll keep that a secret from the grieving widow (Jane Asher) if he’s paid £15,000.

What happens, essentially, is that all of these elements are mixed together and cross-mingle liberally for the short running time of the film. Simon ends up naked on the roof after being convinced that the body in the casket is still alive. Peter ends up drugged with the same hallucinogenic, and also winds up in the coffin after he falls and hits his head on a coffee table. Everything that can go wrong does go wrong, leading to a manic final 20 minutes when everything finally gets sorted out.

Death at a Funeral is smart enough to not overstay its welcome. The film runs a little over 90 minutes including several minutes of credits at the end. More and it would be overwhelming. It’s the right length for the manic story it’s telling. It also manages to end with a nice message. It didn’t really need to, but the few moments of sanity toward the end of the film make a nice counterpoint to everything else that happens.

Death at a Funeral succeeds not because of the message or the performances, but the humor. For my money, the performances of Andy Nyman as the hopelessly nervous and socially moronic Howard and Alan Tudyk’s insane drug-induced hysteria take the top prize, but there’s not an actor out of place here, and not a performance that doesn’t work. This is very funny stuff given just enough of an edge to make it a little bit prurient and very human.

There’s a lot to like here and not a lot to dislike. It would be easy to say I wanted more, but more would just be overkill. It brings the funny, keeps it up consistently, and then ends on a high note with a final coda that touches back to everything that happened during the day. In other words it succeeds everywhere it needs to.

Good call. I’d heard about this before and now I know why I had. That makes you 3 for 3, Chip.

Why to watch Death at a Funeral: It’s screamingly funny.
Why not to watch: There are a lot of plots to keep in mind at all times.

Email ThisBlogThis!Share to TwitterShare to FacebookShare to Pinterest
Labels: comedy, Death at a Funeral, Frank Oz, Picks from Chip