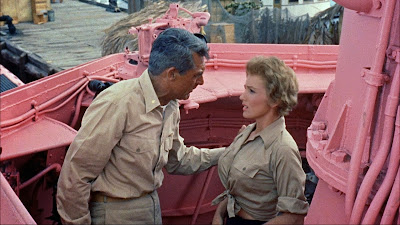 War comedies are a strange breed of film. War, by nature, is deadly serious, and yet something so terribly serious does lend itself to a particular type of comedy. Black humor is the obvious guess, but a film like Operation Petticoat opts instead for something much closer to screwball. It’s also worth saying that 1959 was a good year for both Cary Grant and Tony Curtis. Both are top billed in this, and both had even more successfully financial films in the same year; Grant had North by Northwest and Curtis did Some Like it Hot.

Rear Admiral Matt Sherman (Cary Grant) boards the submarine Sea Tiger a couple of hours before the sub is to be decommissioned. Inside, he discovers the captain’s log. Since he was the first captain of the sub, it’s his own log, and the entire film is spent in flashback as Sherman goes through the log of the Sea Tiger’s particular adventures during World War II in the Pacific.

The Sea Tiger begins inauspiciously, sunk in dock before it got a chance to enter the war. Sherman convinces the brass that if he can get the sub up and running, he and his crew should be able to enter the war. This will necessitate heading off to an actual dock for real repairs and refit. They are forced to do this with a skeleton crew since a number of the ship’s men have already requested a transfer off. Sherman is promised replacements as soon as feasible.

His first replacement is Lieutenant Nick Holden (Tony Curtis), who has more or less been a play sailor up to this point in his career. His jobs have consisted almost entirely of being on land serving as a morale officer or as the assistant to an admiral. Now on a ship that’s already been sunk, Holden puts his actual talents to work. As it turns out, Holden grew up in a very rough neighborhood and learned to survive by scrounging.

I won’t go through everything that happens to the crew or the Sea Tiger itself. Suffice to say that at their first stop, they are forced to bring on board the American personnel stranded there. As it happens, that personnel happens to be a quintet of Army nurses, who are suddenly packed into a submarine with a hundred men. Holden makes an immediate play for Lt. Barbara Duran (Dina Merrill) despite his being engaged to a very wealthy woman. As for Captain Sherman, he is continually mixed up with the chesty Lt. Dolores Crandall (Joan O’Brien), who is just ditzy and clumsy enough to be realistic, almost. Actually, she’s more or less just unlucky.

Over the course of the film, the Sea Tiger shoots a truck with a torpedo, ends up painted bright pink, and is forced to cobble together spare parts to keep the sub running, including using the girdle of lead nurse Major Edna Heywood (Virginia Gregg), much to the disgust of the engineer, Chief Mulumphry (Gene Evans). Eventually, the Sea Tiger ends up being hunted by both sides of the war, the Japanese trying to sink it because it’s an American craft and the Americans because they have no record of a pink sub. However, since this is a comedy, it’ll all work out in the end.

Operation Petticoat is a farce for the most part and functions like a screwball comedy all the way through. It’s all in good spirits, though. It does get serious a time or two, but even tends to play these moments for comedy whenever it can. It is, ultimately, Lt. Crandall’s bra that saves the sub from being sunk permanently while the sub is under assault. There’s no way that something like that can’t be played for comedy.

It’s Cary Grant who holds the film together, though. Tony Curtis plays fast and loose with military regulations, making him a farcical character to the same extent as Lt. Crandall. Much the same could be said of the rest of the supporting cast, who include such comedy luminaries as Dick Sargent, Gavin MacLeod, and the great Marion Ross. Grant pulls it all together, though, by playing Matt Sherman as straight as possible. Oh, Sherman has a good quip now and then and a couple of solid one-liners, but Grant plays the whole thing as someone without much of a sense of humor, and that’s what makes everything work.

One of the more interesting aspects of Operation Petticoat is that many of the things that happen in the film actually did happen to real submarines during World War II, including a submarine being painted pink and the “sinking” of a truck on a dock. It’s a nice touch of surreal realism and evidence that the truth is often stranger than fiction.

It’s hard not to be entertained at least a little by Operation Petticoat. It’s a film that very much shows its age in terms of attitude toward women on board, but it’s also fairly progressive in a lot of respects. While Dolores Crandall might be a ditz, the rest of the nurses are intelligent and competent and are ultimately treated with a great deal of respect. That’s always refreshing from a film that’s a little less than a decade older than I am. So sure, it’s sexist, but at least it’s not misogynist.

Why to watch Operation Petticoat: It’s harmless fun.
Why not to watch: It’s also pretty much fluff.

Posted by SJHoneywell at 6:57 PM