Film: The Theory of Everything
Format: DVD from NetFlix on rockin’ flatscreen. 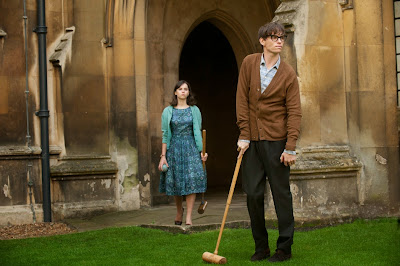 Most of my current heroes are mental heroes rather than physical ones. I don’t give a flying crap about sports these days, so it doesn’t affect me how many yards one quarterback threw for or how many home runs some left fielder hits. No, I tend to reserve my admiration for people of distinct and definable mental acuity, at least in the world outside of movies. At work, I often feel like the only person who can speak about someone like Krzysztof Kieslowski. I sometimes feel like I’m also the only person who can talk about a guy like Lawrence Krauss, although I suspect that isn’t true. It’s no surprise that The Theory of Everything was thus high on my list of films I wanted to see.

I can see people objecting off the top to the name of The Theory of Everything since the film itself doesn’t encompass an actual theory of everything. This is also true when the source material for the book has a great title: Jane Hawking’s book “Traveling to Infinity.”

Anyway, it’s actually kind of hard to determine exactly what the through-line of the film really is. Is it about the career of Stephen Hawking? Kind of, yes. Is it about the romance and eventual failed marriage of Stephen and Jane Hawking? Well, there’s some of that in here, too. Is it about the progression of Hawking’s degenerative illness? Yes, there as well. It’s about all three of these things, but because it is, it’s also kind of about none of them.

We start with Stephen Hawking (Eddie Redmayne) as a Cambridge student trying to decide on what his PhD thesis should cover. He meets Jane Wilde (Felicity Jones) and over time, the two become a romantic item. After attending a lecture on black holes, Hawking starts thinking about the nature of black holes and the nature of time and decides on his thesis topic. It’s also at this time that he starts noticing that he is wearing down physically. After a serious fall, he is diagnosed with motor neuron disease, more commonly known as ALS or Lou Gehrig’s disease and is given a two-year prognosis.

Jane stands by him and the two are married. The film skips through time, showing us both the progression of their marriage and the slow degeneration of his health. When he is awarded his doctorate, he walks with a pair of canes. Shortly thereafter, he is confined to a wheelchair. Eventually, the couple starts receiving help from Jonathan (Charlie Cox), who runs the choir at the local church. He and Jane become attracted to each other, but with the birth of the third Hawking child, he fades into the background since it is already suspected by many that he is the father.

Eventually, due to a tracheotomy necessitated by pneumonia, Hawking loses his voice for good and is granted the computer voice that has become so associated with him. Stephen and Jane drift further apart, partly because of his illness, partly because of her deep religious faith and his lack of belief, and partly because of Elaine (Maxine Peake), a nurse who eventually becomes Stephen Hawking’s second wife. The movie does end on a relative positive note despite the rather tragic nature of the couple’s relationship. It’s almost upbeat in spite of itself.

So let’s get into the guts here. First, it was nice to see Charlie Cox in something. I hadn’t seen him since Stardust, so it’s good that he’s still around (yes, I know he’s starring in the upcoming Daredevil series). But that’s a minor thing. The Oscar nominations here went to Felicity Jones and Eddie Redmayne, so they’re the real focus.

Felicity Jones is good throughout. There are moments when she is essentially asked to demonstrate precisely how she feels without speaking, and she plays Jane Hawking as a woman who wears her emotions very openly. While it’s unspoken, I get the impression that a good deal of the trouble in the Hawkings’ marriage was just how much was expected of her and for how long it was expected. After all, this was a woman who signed up for a two-year tour of duty watching this man fade away and ended up married to him for better than three decades. She looks constantly tired and constantly frustrated, and it works.

Eddie Redmayne is the real story, though. It’s a cliché that men win Oscars by portraying someone who is mentally or physically handicapped in some way, but it’s also true that often his is because those roles are so demanding. Redmayne has the great good fortune of looking like Hawking, but he gets the physical side of it as well. He does more than just look like Hawking; he seems to inhabit him. It’s a hell of a role and a hell of a good performance.

My biggest complaint here, other than the title, is that no one seems to age. David Thewlis, who plays Hawking’s professor at the start of the film in the 1960s looks exactly the same when introducing Hawking at a lecture in the 1980s. Felicity Jones manages to look slightly matronly by the end of the film, but she looks pretty much the same as she did as someone in her early 20s at the start. If I didn’t know just from personal knowledge that the film covers 25-30 years, I’d have guessed that the time frame was more like seven or eight.

Still, for what it’s worth, more people need to know about science and be inspired by it. The Theory of Everything could do more in this regard, but it’s at least a good start.

Why to watch The Theory of Everything: More people need to have scientists as heroes.
Why not to watch: Nobody ages.