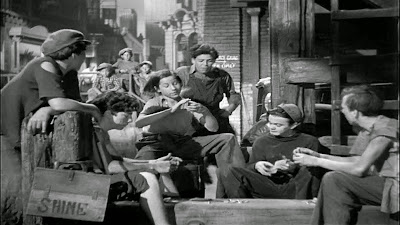 I’ve discovered that when I have a list of films I’m pursuing, there are a few that become ones that I wonder if I’ll ever locate. There are a number of films that I haven’t been able to locate yet, but there are always one or two that stick in my mind Dead End was one of those films for me. So when it finally appeared on Turner Classic Movies, I was excited to see it.

Dead End isn’t exactly a plotless film, but it’s pretty plot-light. There are three intertwined stories going on, each of one which feels like less than a third of the movie. The action takes place in a changing New York neighborhood. While much of the area is covered in slums, the wealthy have built luxury apartments for the views of the East River. Naturally, such a situation creates a great deal of conflict.

The first main story concerns Dave (Joel McCrea), who grew up in the neighborhood. Dave tried to get out and even went to college to study (what else) architecture. His dream was to knock down all of the tenements so that people could live with some dignity. But times are hard and he’s stuck working odd jobs to get by. Dave is very much in love with Drina (Sylvia Sidney), who wants to get out of the projects but can’t. Dave would like to get Drina out, but refuses to have a real relationship with her because he can’t provide for her. Instead, he’s having an affair with Kay Burton (Wendy Barrie), the mistress of a wealthy man who has just moved into the area.

The second story involves Drina’s brother Tommy (Billy Halop), the leader of a gang of punk kids who more or less live on the street. Tommy and his gang—the actors came to be known as the Bowery Boys or, because of this movie, the Dead End Kids—hang around and cause trouble and like to mess with any new kids who show up. This means that at one point the gang beats up a rich kid who has just moved into the neighborhood. When the rich kid’s father grabs Tommy to take him to justice, Tommy stabs the man in the arm (more of a scratch, really) to get away, which means there’s a minor manhunt out for the boy.

The third story concerns Baby Face Martin (Humphrey Bogart), who grew up with Dave. Baby Face is a wanted criminal, known to have killed at least eight men. He’s back in the neighborhood after some plastic surgery to find his mother and Francey (Claire Trevor), his old girlfriend. His mother is ashamed of him and Francey has become a prostitute and one stricken with syphilis, no less, causing Baby Face to reevaluate his return. Since he wants something from his trip back, he decides with his friend Hunk (Allen Jenkins) to kidnap the rich kid.

Dead End is interesting in the sense that unlike many films of the era, not everything works out. Since this is from 1937, it would be easy to guess that Baby Face will be capture, Dave will get a job and move Drina out of the slums and that Tommy will be forgiven for his crimes of stabbing someone in the arm. But Dead End is also an early noir film, and not everything works out in that Hollywood ending way.

The biggest issue with Dead End is that it focuses far too much attention on the kids. There are long stretches of film here that are more or less just the hijinks of the Dead End kids, with a lot of attention focused on Spit (Leo Gorcey) and Tommy. While the kids do have a part to play in the overall narrative, watching them jump into the East River or roast potatoes over a makeshift fire does nothing for the story. Since the film is already short (a touch over 90 minutes), time wasted with kids doing nothing is really time wasted.

Because of this, Dead End feels superficial. We don’t really dive that deeply into what motivates Dave or Baby Face or Drina, and all of these things would be very interesting to know. We’re supposed to like Dave and Drina and dislike Baby Face, and for the most part that happens to be the case. But we like and dislike these characters not for who they are but because the film essentially tells us that that’s what we’re supposed to do.

Any early film in a genre has to learn the way through that genre, and Dead End is almost certainly an essential film for figuring out what would eventually become film noir. It gets a lot of things right and its missteps are due to it having to cut its own way through the jungle rather than follow the path of earlier films.

It’s worth noting that Claire Trevor, who is on screen for about five minutes, earned a Best Supporting Actress nomination for this role. I’m always surprised when someone is nominated for so short a role, but she really is one of the high points of the film. Francey is a degraded creature, and Trevor plays her as desperate but not so desperate as to give up hustling. Her scene in the middle of the film is one of the reasons to watch this. Well, that and Bogart, who was always great when he played thugs.

Why to watch Dead End: Bogart played fun bad guys.
Why not to watch: Too much focus on the kids, not enough on the main action.