Film: The Ides of March
Format: DVD from Rockford Public Library on laptop. 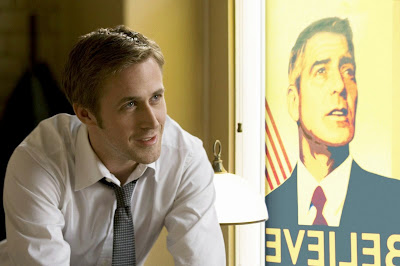 Everyone knows that politics is a dirty business. There’s a saying that anyone who wants to be president shouldn’t be trusted with the job. In my experience that same statement goes for Congress, state legislatures, and possibly most county and other local positions as well. Everyone pretty much knows this, but we tend to forget it at times. Films like The Ides of March serve as something like a vaccination for that forgetting. We need to be reminded frequently that our political process, still potentially the best one in the world, is still pretty shitty in a lot of respects and probably will be for the foreseeable future.

The Ides of March tells a highly fictionalized version of the Democratic primary leading up to a presidential election, presumably, based on the year of release analogous to the 2008 election. That said, it could have really been any year when there was an actual primary, and for that matter, it could have just as easily been Republican candidates. The story is told through the point of view of Stephen Meyers (Ryan Gosling), the assistant campaign manager for Pennsylvania Governor Mike Morris (George Clooney). Stephen is a true believer, someone who refuses to compromise or play dirty because he feels that he doesn’t need to, thanks to the integrity of his candidate.

Things get interesting when Stephen is approached by Tom Duffy (Paul Giamatti) and offered a job working for the other Democratic candidate. Stephen immediately calls his boss, Paul Zara (Philip Seymour Hoffman), who doesn’t answer the call. He later tells Paul about the meeting and is essentially told that attending that face-to-face meeting was a huge mistake, giving Duffy a potential story to drop if he needs it. Much of the maneuvering concerns Senator Thompson (Jeffrey Wright) from North Carolina, who, depending on his nomination, can swing the primary to one candidate or the other. Duffy’s candidate has promised Thompson the position of Secretary of State, while Morris refuses to deal with the Senator because of personal distaste.

While all of this is happening, Stephen begins a relationship with Molly Stearns (Evan Rachel Wood), an intern 10 years younger than he and who happens to be the daughter of the DNC Chairman. All of this seems relatively normal, but not terribly earthshattering until everything breaks loose around the midpoint of the film.

In rapid succession, Molly admits that she is pregnant, and not by Stephen, but by candidate Mike Morris. Stephen arranges for her to have an abortion and also fires her from the campaign so that she cannot serve as a distraction. Stephen is confronted by New York Times correspondent Ida Horowicz (Marisa Tomei) about the meeting between him and Tom Duffy. On the day that he takes Molly for the abortion, he is confronted by his boss Paul and fired for disloyalty. He flees to the other campaign only to be told that he’s not wanted anymore—what was important was getting him off the Morris campaign, either be hiring him or getting him canned. What happens next is within the realm of the believable (which is always a mark of good writing) and better left without being spoiled.

What makes The Ides of March work is more the story than the characters, with the exception of Stephen. We have to believe in him at the start of the film to understand the massive change he undergoes by the time the credits roll. At the beginning, he is young and idealistic, someone for whom politics is a dirty business, but one that could be better and that could be almost noble. By the time the film concludes, Stephen is down in the mud, willing to do anything to get his candidate to win, to cut any deal. The lesson here is not that Stephen falls from grace as it were, but that everyone around him fell long before.

Overall, The Ides of March is good, and it’s good specifically because it’s thought-provoking. It holds up a very unpleasant mirror to the political process, one that is unflattering not just to the candidates but to the system as a whole. It’s bolstered by a tremendous cast. Gosling is good (as he often is), and plays Stephen’s descent into political dirty dealing as a natural progression of the character and the story. Clooney is particularly good as well, since he plays the role of a politician naturally. He’s someone easy to like on the screen, and seeing him dirtied up a bit is actually refreshing.

Not enough can ever be said about the twin talents of Philip Seymour Hoffman and Paul Giamatti, though. I love both of these guys, and love them a lot here. This is especially true of Giamatti, whose Tom Duffy is as morally broken as they come, but not so morally broken that he can be empathetic to the plight of others. I also like Marisa Tomei in this. Her part is small, appearing in four or five scenes, but she’s pivotal and excellent. The more I see her, the more I like her in front of the camera.

All in all, this is a successful film, and it is in large part because of the conversations that will happen after viewing.

Why to watch The Ides of March: Political dram at its best.
Why not to watch: It’s sad that this is the reality of politics.