Tell Me About the Rabbit 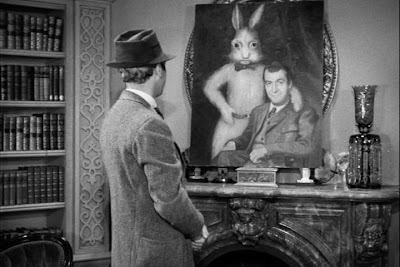 I’m not really sure how to explain Harvey to someone who hasn’t seen it. It certainly falls into the realm of screwball comedy, and is also a film that makes hay with the idea of the “funny drunk” in the main character. There’s also an odd darkness to Harvey that creeps in at the edges. It’s never really apparent when the film is playing, but in thinking about it afterwards, there are some moments that could easily take a dark turn played just a little differently. Fortunately, it sticks mostly to comedy, which is appropriate for a film about a man with an invisible rabbit has his constant companion.

Elwood P. Dowd (James Stewart) is the local eccentric of his home town. Part of this is because he likes nothing more than a martini in the local bar and thus indulges himself at every opportunity. The main reason, though, is his friend Harvey. Elwood describes Harvey as a pooka (or puca), a Celtic spirit that is sometimes mischievous but generally benign. Harvey and Elwood have been companions for years, and Elwood loves to introduce his friend to everyone he meets. The problem, of course, is that no one can see Harvey or interact with him in any way.

Elwood’s drinking and constant obsession with Harvey the pooka has taken a serious toll on his older sister Veta Louise Simmons (Josephine Hull, who won a well-deserved Oscar for this role). Veta just wants a normal life, as does her daughter, Myrtle May (Victoria Horne). Actually, what Myrtle May really wants is for a man to be interested in her, something she is certain will never happen with Elwood and especially Harvey in the picture.

After Elwood (and Harvey, naturally) ruin a party intended to start Myrtle May in society, Veta decides that it’s time to take matters more seriously. She attempts to have Elwood committed to a local sanitarium, but through a series of miscommunications with the attending psychiatrist Dr. Lyman Sanderson (Charles Drake), ends up committed herself. While this is being straightened out, the head of the sanitarium, Dr. Chumley (Cecil Kellaway) decides that Elwood should be put under lock and key and moves heaven and earth to get him back. Through all of this Elwood remains essentially oblivious to what is going on around him.

Eventually, it all works out, of course. That’s the nature of comedy. Everyone gets something like what he or she wants, including the sanitarium’s nurse Miss Kelly (Peggy Dow) and Wilson (Jesse White), who helps handle the patients. It’s happy endings all around, and the film offers a few clues that Harvey might well be something more than merely a figment of Elwood’s imagination.

I like Harvey. I think it’s possible for someone to not like Harvey, but I’m not sure how that could legitimately happen. This is a wholly entertaining film from start to finish, sold entirely by the performances. Primarily, it’s James Stewart who sells the film as a man who is entirely pleasant and who has no expectations of anything at all. He is matched entirely by Josephine Hull who is completely comic in her frustration. I love this performance.

I mentioned at the top that there’s a little bit of darkness in this film, and I think there is. While everything ends pleasantly and happily, there is a current running through this film about alcoholism and madness in the first act or two. We’re ultimately left with the impression that Harvey may be more than a figment of the imagination, but that’s not where we start. Through most of the running time, Elwood is pleasant but also evidently roaringly insane. The film doesn’t make light of this, but deals with it as a matter of fact. For all his charm and nice manner, Elwood truly believes he is constantly accompanied by an invisible 6’3” rabbit.

However, the darkness here is really just hinted at because everything is played for comedy. It’s impossible not to like Elwood for all his eccentricity. He’d be a frustrating person to live with (ask Veta), but he’d be a lot of fun to hang around with or to sit next to on a barstool. The most telling moment of the film comes when Elwood tells Dr. Sanderson that given the choice of being smart or nice, he’s opted for nice and doesn’t regret it for a bit.

While the film is named for Harvey, it’s really Elwood P. Dowd who makes the whole thing work. As depicted by Stewart, Elwood is a genuinely nice guy, willing to take anything that anyone says in the nicest way possible and with no malice or preconceived notions affecting it. It would be a difficult way to live, but Stewart makes it all look natural, which was always his strength as an actor.

Harvey is one of those rare movies that manages to be timeless. It’s as entertaining now as it was 65 years ago, and it will still be entertaining in another 65 years. My kids like this film, too, and have liked it for years. That in and of itself says a lot. Both of my girls liked this movie—old, black-and-white, and with no animation—long before their ages reached double digits. Any movie this old that can do that is worth watching.

Why to watch Harvey: It’s like good dark chocolate; it’s a little sweet and a little dark and ultimately satisfying.
Why not to watch: The premise is admittedly strange.