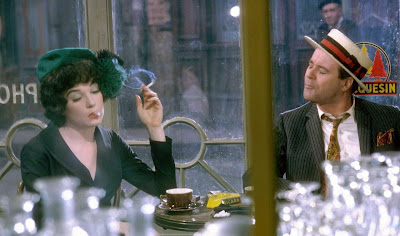 I like the work of Billy Wilder. There may well have been more competent or capable directors within specific genres, but there has never been a more versatile director. Wilder apparently could do and did do just about everything. Irma la Douce is the tenth of Wilder’s directorial efforts I’ve seen. I can’t honestly say that I’ve disliked any of his work. Irma la Douce doesn’t rise to the level of Wilder’s best work, but considering Wilder’s best work, that’s hardly a knock on this film.

Irma la Douce is a romantic comedy, but much like Wilder’s The Apartment, it’s a romantic comedy with a good bit of darkness to it. After all, it is the story of a prostitute and her pimp. Irma la Douce (Shirley MacLaine) is a streetwalker in a Paris neighborhood where it seems that every woman is a hooker and every man has a woman working for him. Irma is the most successful of these women, which is good because her “manager” Hippolyte (Bruce Yarnell) is a thug. Enter Officer Nester Patou (Jack Lemmon).

Patou is a new broom-style officer and also surprisingly naïve. It takes him a few minutes to twig to the fact that he’s walked into a hotbed of prostitution, but once he realizes what’s going on, he raids the by-the-hour hotel (staffed by Howard McNear, better known as Floyd the Barber from the Andy Griffiths Show) and arrests all the women, including Irma. What Nester doesn’t know is that most of the girls have an agreement with the police department. This unceremonious bust, which reveals that the chief inspector (Herschel Bernardi) is a frequent client there, loses Nester his job.

And so Nester winds up back in the same neighborhood. Through a series of misunderstandings and luck, Nester manages to beat up Hippolyte in defense of Irma, and thus becomes Irma’s new man and new manager. But he’s also got a problem. Nester isn’t happy with sharing Irma with all of the men of Paris. With the assistance of Moustache (Lou Jacobi) who runs the neighborhood bistro, Nester hatches a plan. He creates Lord X, an unnamed British nobleman who pays Irma for her non-sexual company (except for once) and pays her enough that she doesn’t need to walk the streets. Unfortunately for Nester, this means that he has to work himself to the bone to make all of the money that Lord X pays Irma, that Irma then gives back to Nester.

Eventually, Irma suspects Nester of running around on her and wants to run off with Lord X. But since Lord X is actually Nester in disguise, he can’t have that. Instead, he dumps the disguise in the Seine, but is seen by Hippolyte, who then accuses Nester of murder. And Irma is pregnant with Lord X’s child after their last meeting. And hilarity ensues.

Irma la Douce is needlessly long, running nearly 150 minutes for what is little more than a twisty comedy romance. Trimmed down 20-25%, it would move on faster without losing a great deal. We spend far too much time, for instance, watching Jack Lemmon remove his clothing on his first night with Irma, and too much time without much going on. The film never really drags, but it also has long portions where it hasn’t picked up much steam, and a trim would do it some good.

There are some real bright spots here, though. First is that far more than in the Lemmon/MacLaine film The Apartment Shirley MacLaine’s sexy beast status is significantly amped up here. There’s quite a bit of footage of her running around in a green bra and panties set, and it’s hard to deny that as crazy as she may have become in later years that she wasn’t attractive as all hell in the 1960s. Lemmon, as always, puts in a solid comedic performance that is distinctly Jack Lemmon. He had the knack of taking a role—at least in comedies—and making them his completely to the point where it is difficult to imagine another actor in the role. True to form, it’s tough to picture Nester portrayed by anyone else.

It’s Lou Jacobi who makes the film, though. Moustache appears more or less as Nester’s idea man. No matter what happens around him, Moustache has experience with it, claiming all number of important jobs in his past and finishing each of these claims with, “But that’s another story.” Moustache is easily the funniest character in the film and also the smartest. I’m mildly surprised that Jacobi didn’t earn a nomination for Supporting Actor.

I also appreciate the sexual openness of the film. This is, after all, a good half dozen years before the Summer of Love. Sex is treated like what it is—sex—and not some grand mystery or taboo thing. For Irma, sex is a business and she can’t understand why anyone would think of it any differently. There are a couple of sexual jokes worked in here as well, like a hooker named Lolita who is never seen without her heart-shaped sunglasses.

As an added bonus, this film also marks early on-screen appearances of Bill Bixby as a tattooed sailor, James Caan as a soldier with a radio, and the debut of the terrifying Tura Satana of Faster, Pussycat! Kill! Kill! fame.

Ultimately, Irma la Douce is very much lesser Billy Wilder. It’s entertaining, but little else, and too long for what it is.

Why to watch Irma la Douce: Shirley MacLaine and Jack Lemmon make a great screen couple.
Why not to watch: The Apartment is better.