Your Face Picks Movies (Nick): The Castle of Cagliostro

This is the third in a series of monthly reviews suggested by the guys at Your Face. This is Nick’s first pick. 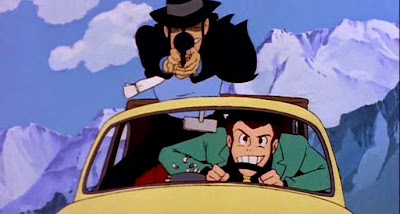 Nick Jobe loves to make me watch animated films. At the very least, he likes to talk about making me watch animated films, and his list for this year demonstrates that. The Castle of Cagliostro (Rupan Sansei: Kariosutoro no Shiro) is Nick’s first push into anime this year, chosen I’m sure in part because it’s also the first feature film credited to Hayao Miyazaki as the director. So I went into this a little leery of how a less seasoned Miyazaki would fare, but also confident that this was a film made by a man with miles of talent.

The biggest strike against the film for me becomes evident right off the bat—this is a film that is in the middle of a series of films. While we get some backstory on the characters, there are a number of things that simply aren’t explained. This is different from my typical anime complaint of a lack of exposition. I’m guessing that if I went back and watched all of the previous films and the television show, or read the manga, I wouldn’t have a single issue with knowing who the characters were and all of the relationships. This is key with a couple of characters in this film. It’s not a huge issue, but it did bother me a little.

Anyway, well-known gentleman thief Arsene Lupin III (Sean Barker in the version I watched) and his friend Jigen (Ivan Buckley) have successfully robbed a casino and made off with quite literally a car full of money. The joy is short-lived, though, as Lupin realizes that they’ve actually stolen a pile of counterfeit bills that are so good that it’s virtually impossible to tell the difference between them and the real thing. They toss all of the funny money out of the car and drive on, now with the plan of infiltrating the tiny kingdom of Cagliostro. As it happens, Lupin knows that this is where the counterfeit money comes from. It does beg the question, though, that if the counterfeit bills are this good, why not keep them and use them? And how did he know that all of the bills were fakes?

Anyway, in Cagliostro, Lupin and Jigen discover that things are not all well in the little kingdom. A wedding is planned between Clarisse (Ruby Marlowe), the princess of Cagliostro and Count Lazare (Sparky Thornton), who also happens to be the counterfeiter. Lupin and Jigen rescue Clarisse from men who are chasing her and it’s eventually revealed that Lupin has been to the kingdom before when he attempted to find the source of the legendary counterfeit bills, and it was Clarisse who saved him. We also learn that Lupin, since he is an international gentleman thief, is pursued by Zenigata (Dougary Grant) from Interpol. And naturally we learn that the Count is a really bad guy and Clarisse is held under lock and key

So, being a gentleman thief, announces that he will steal Clarisse. Through a series of misadventures, both Lupin and Zenigata are trapped in the castle and agree to join forces until they get out and bring down the Count for his counterfeiting operation. And there are daring rescues and narrow escapes.

Oh, and there are characters that are certainly present in earlier Arsene Lupin III tales that fans will know but that I did not. First there is Fujiko (Dorothy Melendrez), who is apparently a thief as well and a former lover/associate of Lupin and apparently still a thief but also a newscaster for some reason. And there’s also Goemon (Michael Gregory), a modern samurai who shows up to look cool and sometimes unsheathe his blade. As mentioned at the top, I’d probably know these characters were I more familiar with this series. I’ll even venture a guess that had I watched these stories in order, I’d have been really excited to see Goemon show up.

It’s hard not to enjoy The Castle of Cagliostro on some level, even if that level is one of nostalgia. There’s a feeling to this film that reminds me of a very long extended episode of the sort of show I watched as a kid. It’s a fun adventure with characters that are easy to like despite their being bad guys. After all, they’re good bad guys, not real bad guys like the Count.

It’s formulaic, though. It’s not hard to see where we’re going here or how it’s all going to turn out. Hayao Miyazaki got a lot better than this, but this was a decent. This sneaks in not because I love it but more because I didn’t dislike it. That makes you guys 3 for 3.

Why to watch The Castle of Cagliostro: A very different take on the gentleman thief.
Why not to watch: Miyazaki got a lot better.