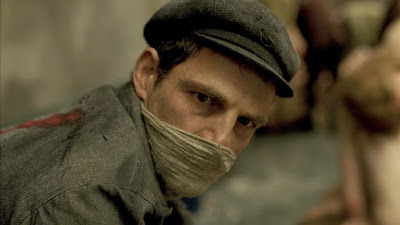 When the latest version of the 1001 Movies list came out, I’d seen seven of the new 10. It would seem, then, that finishing up would have been something I could pretty much handle in a weekend. And yet here we are, after Thanksgiving and close to the end of November, and I’m just putting the bow on the additions now. The reason for that is that I haven’t really wanted to watch Son of Saul (Saul Fia) that much. I’m not sure I can fully explain why, although I can try.

I understand on a rational level why there are so many films about the Holocaust. It’s the sort of thing that we need to remind ourselves happened. This is a part of history that needs to be constantly refreshed in the minds of the world, especially now that we are generations away from the actual events. But there’s also a limit, I think, to how much I want to spend in these events. I know a great deal of what happened. I understand, at least on an academic level, the horror of what happened. On an emotional level, I’m not sure how many more times I want to go through this wringer.

Son of Saul tells the story of Saul Auslander (Gesa Rohrig), a Hungarian Jew who has been placed in Auchwitz. Saul works as a Sonderkommando, or part of the “special unit” that deals with the dead. While prisoners are being exterminated, Saul and the other members of his team go through the clothing for valuables, then deal with the bodies and clean the floor of the gas chambers. One day, a young boy survives the gassing. Saul watches a Nazi doctor suffocate the boy and demand an autopsy to determine how he survived. Saul volunteers to bring the body to the prison doctor (Sandor Zsoter) and tries to convince him not to perform the autopsy. In fact, Saul wants to give the boy a proper burial.

The reason for this we don’t discover until later in the film. I’d call what I’m about to reveal a spoiler, except for the fact that this movie is called Son of Saul. The boy who survived the gassing is Saul’s illegitimate son, and now he feels responsible for the boy and wants to do right by him, giving him the proper Jewish burial, which requires a rabbi. Of course, arranging this is impossibly difficult. The bodies are sent to the crematoria straight away, and even in the rare cases of an autopsy, the bodies end up there anyway. And where would he bury the body? Or get the tools necessary? But still, Saul perseveres.

To get what he wants, Saul gets involved in a conspiracy to incite a revolt against the guards. Some wish to revolt openly, evidently preferring to be killed in battle than be led off to their deaths. Others hope to get their story to the outside world by sneaking pictures of the crematoria and the showers out of the camp. In both cases, there is very little hope of any sort of success. Saul, hoping that favors will be owed to him and that this may lead him to a rabbi willing and able to perform the service for his son, does what he can to aid anyone in a position that might aid him.

And really, that’s it. It’s a very dark, unpleasant version of Life is Beautiful in a way. We have a man incarcerated in a death camp who is risking his life and doing everything he can for the benefit of his son. In this case, of course, the son is dead, which adds a tragic and terrible air to something that is already by definition terrible and tragic. Movies like this are always a gut punch to me. I understand the importance and why these movies cry out to be seen. I just don’t always want to do it.

Geza Rohrig’s performance is an interesting one. He is almost constantly passive and expressionless. That would often be an issue, but here, it’s clear that Saul’s passivity and lack of evident emotion are both a defense mechanism and a way to avoid trouble with anyone who may have authority over him. Saul has no real hope, so his mask becomes something that allows him to simply survive. The discovery of his son doesn’t give him hope, but it does at least temporarily give him purpose, but by this point, the emotionless mask has become something that keeps him alive and protects his secrets.

Son of Saul is not a movie I really want to watch again. That’s honestly true of the bulk of Holocaust films, which is why there are a few still on the Oscar list for me to get through. I get why this is an important film. I even get why it won an Oscar, even without having seen the other nominees. I just reach my limit on this basic story very quickly these days. There’s only so much more emotional stretch I have in this direction any more.

But hey…I’m done for another year.

Why to watch Son of Saul: Some stories need to be told.
Why not to watch: It’s numbing.