Film: In Which We Serve
Format: MGM HD Channel on rockin’ flatscreen. 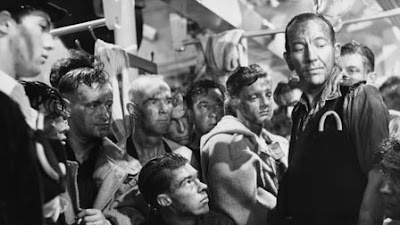 A propaganda film is its own thing. On the positive side, we can get a solid drama that has the additional elements of nationalism and patriotic pride. On the downside, you get something that is little more than jingoist bukkake. Propaganda films run the gamut. The bad ones generally aren’t worth the film stock they are on, while good ones can truly stand the test of time. The other day, I recorded one of my favorites on the DVR. In Which We Serve seems to have a lot going against it on paper, but it finds a way to make it all work.

In Which We Serve is one of those movies that more or less starts at an important moment and then spends most of the movie flashing back. What’s most interesting here is that the flashbacks all come from the perspectives of multiple characters. We’re told at the beginning that this is the story of a ship. In this case the ship is the HMS Torrin, a British destroyer. We begin with the Torrin firing on German transport vessels, and then coming under attack from bombers. It’s not long for the ship, and she’s hit by a bomb and begins sinking. The men fight back as long as they can until they are ordered to abandon ship. A group of men swim to a float and hang on for dear life.

And we get into the flashbacks. There are a few men specifically who become more or less our main characters. The first is naturally the captain, E.V. Kinross (Noel Coward). The second is the ship’s Chief Petty Officer Walter Hardy (Bernard Miles). The third is Ordinary Seaman Shorty Blake (John Mills). While move back and forth between these three men and their reveries, we also move sequentially through the life of the ship from it being built to the moment of its sinking.

In the course of this, we learn a great deal about the men and their lives in England. Kinross has a rather sweet relationship with his wife Alix (Celia Johnson) and their two children. Alix has learned that while she loves her husband dearly, she has also realized that his first love will always be His Majesty’s Navy, and whatever ship he is on first and foremost. We see Shorty Blake introduced to Freda Lewis (Kay Walsh) and romance blooms almost immediately. It’s not too long before we learn that Freda is the niece-by-marriage of Petty Officer Hardy. Once Shorty and Freda are married and Freda leaves the honeymoon pregnant, she goes to live with Hardy’s wife Kath (Joyce Carey).

We also get some key moments in the war. The Torrin is involved in the “Phoney War” at the beginning, but is also involved the retreat from Dunkirk, where the sailors treat the damaged and defeated troops with kindness and brotherhood despite the natural rivalry between the services.

One of the key plot points is the way that Kinross runs his ship. He tells the men on the occasion of the ship’s virgin cruise that he wants a happy ship and an efficient ship. In his mind, a happy ship will be an efficient one, and an efficient ship will naturally be happy. For the most part, he gets what he wants, except for one moment when one of his younger sailors (an uncredited and very young Richard Attenborough) runs from his post in the middle of a battle. The ship is damaged and eventually towed back to port where Kinross addresses the men and commends them for their courage. He brings up the sailor who abandoned his post and tells the men that he let the sailor off with just a warning, since he feels that he is himself at least partly responsible for the sailor’s departure. It’s an interesting scene. Rather than making Kinross look weak, it makes him look like a genuine leader.

Outside of the flashbacks, we deal with the men desperately clinging to the float and trying to survive the continued attacks from German planes that strafe them regularly. Their numbers slowly dwindle until eventually a British ship shows up on the horizon.

I said at the beginning that this had some strikes against it going in. The biggest strike was Noel Coward in the lead role. Coward had made a career of drawing room comedies where he was essentially battling with wit. He was a risk in the role of a courageous captain of a fighting vessel. It was a risk that paid off—Coward plays the role with a genteel nobility, a sort of regal calm that works beautifully for the role.

I’m a big fan of this movie. I love the way it travels back and forth between the war and the home front. I like how much we learn to like these characters, all of whom eventually display the same sort of quiet nobility of their captain. We like them. We want them to survive, and not simply because they are British and fighting the Germans. We like them because they’re really nice guys who it would be good to share a beer with.

This is how you do a propaganda film. You make us like the characters first. Get us to respect them and enjoy them and want them to survive and stick the nationalism in afterward. Filmmakers, take note. In Which We Serve is a good movie first with good characters, and a propaganda film second.