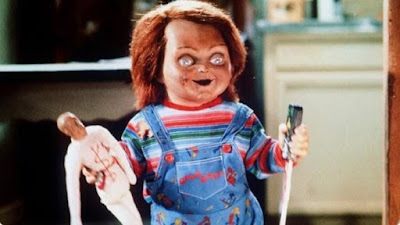 I like horror movies, so it was natural that eventually I’d get around to a review of Child’s Play. Since it’s on one of my horror lists, and since I’m still coming down from all the horror movies of the last couple of weeks, it seemed like a good opportunity to knock this one out. What came as a surprise to me when I started watching this was that I’d never actually seen the whole thing. I’ve seen large chunks of the film but never the whole thing from front to back. Who knew?

Anyway, even if like me you haven’t actually seen the whole film, you almost certainly know the basics of the premise. There’s a Teddy Ruxpin-like doll named Chucky who is actually alive somehow and is also a psychotic killer. Fun premise. There’s always something interesting about the corruption of innocence in a horror movie, and making a child’s toy horrifically evil is certainly doing that. Like any good horror movie, there are plenty of places where we need to suspend disbelief, but the premise actually carries us through the entire movie pretty solidly.

We don’t start with Chucky, of course. We need to get the doll to come alive. Instead, we start with Charles Lee Ray (Brad Dourif), a noted serial killer and voodoo aficionado. Finally cornered by Chicago police detective Mike Norris (Chris Sarandon), Ray is fatally wounded in a shootout. But he’s managed to sneak into a toy store, and using his awesome voodoo knowledge, he transfers his soul into the body of a Good Guy doll, a ginormous battery-operated doll based on a television series.

Cut to the next day where widowed mother Karen Barclay (Catherine Hicks) is celebrating her son Andy’s (Alex Vincent) sixth birthday. Andy is a big fan of the Good Guys television show and desperately wants a Good Guys doll for his very own. That day at her job, Karen is alerted to a peddler hawking one of those very dolls outside the store she works at by her coworker Maggie (Dinah Manoff). Karen buys the doll for 30 cents on the dollar, and suddenly Chucky has a home. Hilarity and homicide ensues.

Essentially Charles Lee Ray/Chucky continues his reign of murderous terror, but is now forced to do so from the body of an animatronic toy. Young Andy realizes soon enough that Chucky is actually alive. Some of the standard horror tropes are going to be alive and well here—it’s not a shock when Maggie, who is babysitting Andy, doesn’t make it to the 30-minute mark. The next day when Chucky convinces Andy to take a day off school so he can track down one of his former associates, things start getting rough for Andy. Since that associate ends up dead and Andy is on the scene of a second murder in two days, he’s sent off to an institution for observation, leaving Karen at home alone with a violent toy.

More significant for Chucky is that he learns from the man who taught him voodoo that the longer he stays trapped in the body of a doll, the more the doll becomes his permanent home. To fix the problem, he needs to take over the body of the first person who became aware of his situation: Andy.

So that’s the story here. In a lot of ways, Child’s Play is a pretty inventive riff on a classic trope of horror. The idea of a possessed doll or toy is nothing new, really. It’s the anchor story of the classic Dead of Night from the ‘40s. Films like Trilogy of Terror and Magic have similar themes, and it’s certainly a place that was explored by The Twilight Zone. Chucky is more or less the nth degree of such ideas, and he’s a particularly nasty piece of work.

The biggest question with Child’s Play is whether or not it holds up. Sad to say that it kind of doesn’t. This is one of those films that I think needed to be experienced in the moment, that moment being the end of the 1980s. There’s certainly a lot of good here, but to a modern audience, this comes across not as a fresh, original piece of horror, but as almost pure camp. This is enhanced by Catherine Hicks’s wide-eyed performance and Alex Vincent’s nearly constant whine. I will, however, happily commend Chris Sarandon on truly nailing the Chicago accent.

The real star here, of course, is Chucky himself, and the puppetry is actually very impressive. Chucky actually looks pretty good for most of the film’s running time. There’s a definite malevolence to the creature and this is enhanced by Brad Dourif’s manic voice performance.

It’s hard not to like Child’s Play on some level, but it’s the kind of film that, for today’s audiences, will come across as a little disappointing. It can’t live up to its undeserved reputation, even if it’s still pretty good.

Why to watch Child’s Play: It’s a classic of the genre
Why not to watch: The horror movie/camp movie balance is a little off.