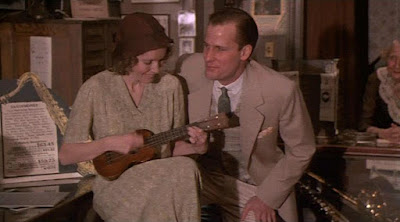 I have to admit that when I initially picked 1985 as the year to look at, I was excited, since that’s right in the wheelhouse of movie years that are important to me. And then I saw nominees and I remember just how often Oscar screwed the pooch in the 1980s and in the mid-‘80s in particular. The biggest miss here, the person I’m still shocked wasn’t nominated, is Mia Farrow for The Purple Rose of Cairo. I’m perhaps a little more understanding of the miss on Sandrine Bonnaire in Vagabond, since it’s an unpleasant film and in a foreign language, but thos are both lame excuses. The miss on Norma Aleandro for The Official Story is perhaps a little more understandable, but it’s still a miss. Kathleen Turner in Prizzi’s Honor feels like a miss, too (and she did The Jewel of the Nile the same year). I’m not a Michelle Pfeiffer fan, but Ladyhawke is wonderful, aside from the soundtrack. How about Cher in Mask? And yes, I realize that Clue came out in 1985 and I love it and love the cast, but none of the women are really lead roles.

5. Meryl Streep has enough nominations that I don’t feel terribly guilty about putting her on the bottom now and then. I know there are a few fans of Out of Africa out there, but I do not consider myself one of them. I don’t like this film. I’m never going to like this film. Streep is Streep, of course, and she doesn’t give a lot of bad performances, but it feels like she was nominated here because of who she is, not because of the role she played. That, and she may have earned a nomination because the film was big and romantic and epic in scope. She’s earned a ton of the nominations she’s gotten. I don’t think she deserved this one.

4. Another 1985 film I didn’t love is The Color Purple. For what it’s worth, I can’t even lay the blame for putting Whoopi Goldberg in fourth place entirely at the feet of Whoopi Goldberg. A lot of my distaste comes from Spielberg’s direction and from the story itself. When Goldberg’s Celie finally stands up for herself, it’s a great moment, but it’s a moment that could have been better. I don’t entirely hate this nomination, but I do think there were better, both in the nominated category and those overlooked. I understand the nomination here; I just think those rare nominations would have been better placed somewhere else.

3. Agnes of God is a tough watch, but Anne Bancroft is one of the reasons to watch it. She has a difficult job here. She needs to be believable and she needs to be just trustworthy enough that we want to believe what she says. But she also has to have a little bit of an edge to her so that we’re not entirely sure that she’s being honest in everything. She does this well. In fact, the only reason I’m not moving her up from here is that I think it’s a legitimate question to ask if perhaps Meg Tilly didn’t deserve the nomination just as much for the same film.

2. Geraldine Page is the main reason to watch The Trip to Bountiful. Like many an actor in a good role, she has a lot to do and she does it well. When the film starts, we like her. She’s a spry, sassy old lady. By the time the film ends, we don’t merely like her; we understand her. We know the things that motivate her and we understand the pains that drive her and drive her actions. This is a film about a woman trying to claim or maintain a measure of dignity in a world where perhaps that dignity wasn’t easy to come by, especially when everyone around her treats her patronizingly. I get why she won.

1. I’m going with Jessica Lange in Sweet Dreams. I don’t really consider myself a huge Lange fan. I like her well enough, I suppose. That said, I think this is her best work on camera. The only fault I can find with her and with her performance is that it’s clear in many cases she’s lip-synching the work of the great Patsy Cline. In every other moment on screen, Lange is just about perfect. I could probably argue for Mia Farrow here, and in a perfect world, Farrow would be battling Lange for the top position. But of the nominations we have, I can’t go any other place.

Email ThisBlogThis!Share to TwitterShare to FacebookShare to Pinterest
Labels: 1985, Agnes of God, Oscar Got It Wrong, Out of Africa, Sweet Dreams, The Color Purple, The Trip to Bountiful