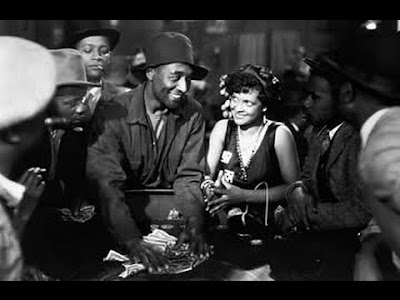 Before the actual opening of Hallelujah on the version I received from NetFlix, there is a long disclaimer from Warner Bros. Essentially, it says that the film that is about to be displayed is filled with prejudice and stereotypes that were common when the film was made. That’s certainly true. The disclaimer goes on to say that the depictions in question were wrong when they were made and still wrong, but that it’s important to show the films unadulterated, as it were, because to do otherwise would be to essentially pretend that this part of history can be or should be ignored. It’s interesting, and having now seen Hallelujah, I get why they felt the disclaimer was necessary.

What makes Hallelujah historically interesting is that it was one of the first, if not the very first, major studio production with an all-black cast. Certainly every named character is black and every character who has anything to say is black. Within Our Gates came first, of course, but didn’t have the backing of a big studio. Hallelujah was evidently seen as such a risky proposition that director/producer King Vidor was forced to invest his own salary into the production. After all, in 1929, this would not necessarily seem to be the sort of movie that would attract Middle America…or even any of white America.

With any older film like this one, it’s important to look past the obvious problems with not merely early film but early talkies. That means a lot of overacting, playing to the back of the theater, and extremely melodramatic plots. In the case of Hallelujah, this also means forgiving a really simple and obvious plot that is populated with really dumb characters. In fact, it’s almost to the film’s credit that the “really dumb characters” aren’t so because of their race. This is a movie that could have, with a few very minor changes, have been made with an all-white cast and told the exact same story at the time. Certainly the fact that the characters are overly religious and uneducated is a factor of them being cotton sharecroppers. The overall gullibility and stupidity, though, is a function of the time and the plot, not their race.

Zekiel (Daniel L. Haynes) is a cotton sharecropper along with the rest of his family. Once the harvest is in, he and his brother Spunk (Everett McGarrity) head into town to sell it and bring money and gifts home to the family. Once in town, Zeke meets Chick (Nina Mae McKinney), to whom he is immediately attracted. It’s clear to anyone in the audience that Chick’s attraction to Zeke is much more to the wad of cash in his pocket than to him. Looking to impress her, Zeke gets roped into a craps game against Hot Shot (William Fountaine), who naturally cheats him. It’s also clear to just about everybody but Zeke that Chick is actually Hot Shot’s partner.

But Zeke isn’t a total rube. He suspects loaded dice. In the struggle, Hot Shot draws a pistol and a few random shots go off. One of them catches Spunk, who dies in Zeke’s arms. Distraught, broke, and with his brother dead, Zeke returns home just long enough to bury his brother. He catches religion in a real way and heads off to become a preacher. When we see him as a preacher, he’s working a crowd with true zeal, and who should be in the crowd but Chick and Hot Shot. At the following revival, Chick proclaims herself saved and gets herself baptized and suddenly she and Zeke are a married couple and Zeke has left the ministry to work in a mill. This is despite his having had a relationship with Missy Rose (Victoria Spivey), his adopted sister.

I said at the top that the characters here are dumb, and this is a function more of the time and the plot than anything else. We as the audience can clearly tell that Chick hasn’t changed a bit and is still carrying on with Hot Shot even though Zeke is unaware of this. He figures it out, though, and suddenly Hot Shot and Chick are trying to run away from Zeke, who seems to have forgotten the “turn the other cheek” parts of the gospel and has instead decided to focus more on the “an eye for an eye” part.

The big sell here is the gospel music, and it’s all over the place. Most of it is great and worth the price of admission to the movie. Everything else is pretty much the same thing you’d expect from a movie of this era and an early talkie. This is compounded by the “we sho’ am is” style of speech that runs through the whole thing. Yes, that’s a function of the time, and my guess is that it’s a great deal of what was being referred to at the start of the film. It’s also really slow. Zeke doesn’t run off with Chick until there are only 20 minutes left, meaning it takes us 80 minutes to get to the place where Zeke starts to falter in his faith. This would work better if that happened in the first half hour and give us a longer path for Zeke’s fall and rise.

It’s not just the language that’s disturbing here, though. It’s the stereotyping that goes far beyond that of the uneducated black sharecropper cast we’re given. All of the characters are either ridiculously religious, wicked, or unable to control their urges. It’s a constant stereotype of the era that a black character is either dumb and happy thanks to Jesus, unrepentantly wicked, or given to animalistic urges for loose women, who are themselves unrepentantly wicked. Made a couple of decades later, this is Carmen Jones, and it’s damaging for the same reasons.

Why to watch Hallelujah: The music.
Why not to watch: Dumb characters, dumb plot.

Posted by SJHoneywell at 5:28 PM