This is the eleventh in a series of twelve movies selected by Nick Jobe. 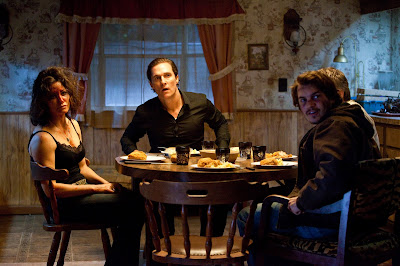 I tried to watch Killer Joe a couple of months ago. When I say that I tried to watch it, I mean that I actually watched about 20 minutes of it and stopped. This wasn’t because I couldn’t bear to get through it or anything like that. No, it was that I discovered that I’d located the R-rated version of the film when it’s the unrated version that I really wanted to see. I knew enough about the movie to know that if I was going to jump down into the sewer, I might as well go in head-first. There are times when the unrated version doesn’t really add that much to the experience, but I knew in my gut that this wasn’t going to be one of those times.

Killer Joe director William Friedkin is no stranger to pushing the envelope with his movies, of course. There are plenty of people who love what he did with The French Connection while I take a much more positive view on The Exorcist from the director’s chair. I’m also one of the only people I know who really likes the 2006 movie Bug, and a lot of what I like about it is the way that Friedkin told the story.

Anyway, Killer Joe is a film that is, well, filthy. It’s not filthy in the way that a John Waters film is filthy, though. This is the sort of film that, if you didn’t recognize the five principle actors, you’d swear was an episode of Cops gone horribly wrong or someone’s film school project that suddenly became a snuff film. I mean this only with the highest level of respect, because Killer Joe is also one of those rare movies that can fully immerse itself in the sewer of humanity and tell the story it wants to without ruining itself in the process.

Chris (Emile Hirsch) is a drug dealer who is suddenly in trouble because his mother Adele has stolen his cocaine and sold it herself. That would be a problem in general for any drug dealer, of course, but Chris owes $6,000 to a man named Digger Soames (Marc Macaulay), who will happily have him killed if he doesn’t come up with the money. Without the cocaine, he has no way to come up with the money he needs, so he goes to the trailer of his father Ansel (Thomas Haden Church), his second wife Sharla (a pantless and merkin-wearing Gina Gershon), and Chris’s sister, the childlike Dottie (Juno Temple).

Unable to borrow the money from Ansel, Chris has a different idea. He’s got two pieces of vital information, both of which come from Adele’s boyfriend Rex. The first is that Adele has a $50,000 life insurance policy. The second is that a Dallas police detective named Joe Cooper (Matthew McConaughey) runs a side business as a hired assassin. Chris’s plan is to hire Joe on spec and give him a cut of the insurance money, then use his own share to pay off Digger Soames.

The problem is that Joe insists on being paid up front, and his fee is not $20,000 but $25,000. Of course, if Chris had that much money, he wouldn’t need Adele killed off for the insurance money. While Joe insists on his various rules, he decides to make an exception in this case by taking instead of his payment up front, a retainer. That retainer is Dottie, which Chris agrees to despite feeling very uneasy about his sister, who is still an innocent in many ways despite her obvious sexuality, being tossed into this sort of relationship with a killer.

Here’s the thing: I realize that at the top of this it sounded like I was complaining about this movie. I’m really not. Killer Joe is sordid and nasty, and it works not despite this but entirely because of it. This is yet another film in the more recent career of Matthew McConaughey evidently designed to redeem his early career into respectability. Gone are the days of him doing shitty rom-coms and stupid actioners. No, this is the kind of film that he was born to make, and he’s just about perfect.

Actually, the whole cast is just about perfect. My biggest issue is with Dottie, and it’s important in this case that my issue is with Dottie the character and not Juno Temple’s performance. I have a little trouble buying the character, but that’s a small price to pay for the movie that we get. Both Emile Hirsch and Thomas Haden Church are almost too good at playing stupid people who think they aren’t. It’s also the best and most disturbing thing that Gina Gershon has ever done.

This is a complete win, Nick. I’ll never eat chicken in the same way again.

Why to watch Killer Joe: I think it has to be seen to be believed.
Why not to watch: You’ll want to bathe yourself in Lysol.

Posted by SJHoneywell at 3:33 PM