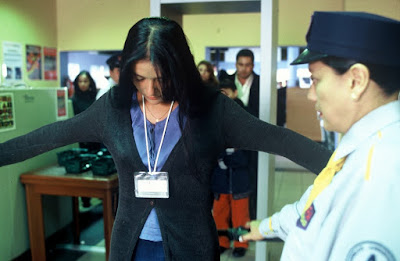 I’m incredibly busy with work right now, so when Maria Full of Grace showed up from NetFlix, I was stressed. I don’t really have time for a subtitled film right now. However, if you don’t watch the NetFlix films you get, the account is pretty much a waste of money. So I worked as much as I could today to have the time I needed to watch this. Given that I put well over 100 grades in my gradebook today to make the time, I hoped it was worth it.

Good thing it is. Maria Full of Grace, for a film that takes place in bright sunlight, is a dark and disturbing tale about hope, fear, and the drug trade in Colombia. The Maria of the title is Maria Alvarez (Catalina Sandino Moreno), a 17-year-old Colombian girl who works on a plantation stripping the thorns off roses. She also happens to be pregnant by her boyfriend, who offers to marry her when he finds out. Maria declines the offer, realizing that she doesn’t love him and he doesn’t love her. When her morning sickness gets in the way of her job, she quits, despite being one of the few people supporting her family, especially her unemployed, single-mother sister.

Things change for Maria when she meets Franklin (John Alex Toro), who arranges for Maria to work as a drug mule. Her job is to swallow condom-wrapped pellets of heroin and fly them into New Jersey. Another mule named Lucy Diaz (Guilied Lopez) teaches her how to swallow the capsules. Eventually, Maria learns how to do it and ingests 62 of them before her flight. Her hope is to earn a substantial amount of money on the trip. She’s far less pleased when she discovers that her friend from the plantation, Blanca (Yenny Paola Vega) has also agreed to work as a mule and will be going on the trip with her.

Maria, Blanca, Lucy, and an unnamed fourth woman fly off to New York. Lucy starts to feel ill on the flight. Once on the ground, Lucy is detained by customs, who suspect her of having swallowed drugs, but she is eventually let through when they cannot x-ray her because of her pregnancy, while the fourth woman is found out and busted. The three remaining drug mules are taken to a motel where they wait to pass the drugs and collect their money. However, it soon becomes evident that one of the capsules has opened in Lucy’s stomach. When Maria wakes up to see Lucy’s body being carried from the room and the bathroom covered in blood, she becomes convinced that her keepers have killed Lucy to get at the drugs. She convinces Blanca to escape with her so that they don’t suffer the same fate.

The main reason to see this is the performance of Catalina Sandino Moreno, who is one of those special actresses nominated for an Oscar in her first film role. Moreno is just about perfect in the role, and it helps that while she was in her early 20s, she looks as if she could pass for 17 or 18. This is a role that requires her to spend a great deal of her time with her face as a neutral mask but still give the audience enough to go on to see what is working behind her eyes. There’s rarely a moment here where we don’t know what Maria is thinking even though she is often unable to display it openly. As a piece of trivia, she’s the first actor nominated for Best Actress for a role done entirely in Spanish.

I also want to throw out a mention of Patricia Rae, who plays Lucy’s New York-based sister Carla. Rae also gives a sympathetic performance here of a woman trying to do her best, but struggling financially. Carla is no drug mule, but a woman who is willing to open her home to people she doesn’t know because they need a place to stay. She has the weary look of a woman struggling to make it on her husband’s small salary, expecting a baby any day. Rae in this film is a faded, but realistic beauty, the sort of woman who probably turned heads half a decade earlier but has been physically (if not emotionally) worn down by time.

The story is one of crushing poverty, despair, and a desperate hope for something more. Like most stories where this is the plot, the hope only lasts for so long before the despair sets in. Maria Full of Grace is perhaps interesting in that it doesn’t end as darkly as it could, although it’s certainly not uplifting in any way. It’s harsh and brutal, much like the world that Maria puts herself in to escape the one she comes from.

Maria Full of Grace is not a film I’d want to watch again any time soon. If I did, though, it would be for the performance of Catalina Sandino Moreno, who might well be the best thing out of Colombia in a couple of decades.

Why to watch Maria Full of Grace: Catalina Sandino Moreno is transcendent.
Why not to watch: This is not a film where much good happens.