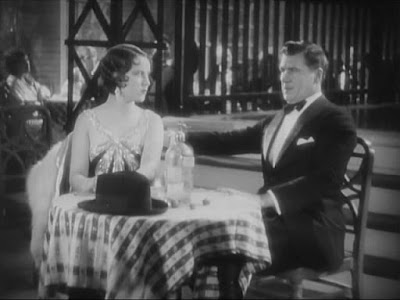 I’ve mentioned before the usefulness of YouTube when it comes to tracking down some obscure films. Thunderbolt is one that has appeared on my personal database as “unfindable” since about the time I started this project. I was extremely pleased, one might even say thankful, to find it on YouTube this morning. There’s something really interesting about pre-Code talkies, and Thunderbolt is one of the first.

Make no mistake here; this is absolutely a pre-Code crime drama that turns on the romance that is forced into it by the evident necessity of needing a romance in every film of the time. Because this is such an early talkie, a lot of the clichés that play into the genre certainly got part of their start here, at least in terms of the talkies.Thunderbold hits all the notes: unrepentant criminals, jailhouse confessions, a good girl gone bad, secret romance, and even a police captain who is trying really hard to sound like what Edward G. Robinson sounded like in his early talkies. Sure, there’s a lot of cliché here, but there’s a lot to like as well.

We open with a romantic tryst. The characters part and we soon learn the reason that this meeting was clandestine. The girl is Mary, but she goes by Ritzie (Fay Wray) and she’s the moll of “Thunderbolt” Jim Lang (George Bancroft), a man wanted for bank robbery in nine states. The young man is Bob Moran (Richard Arlen), who is a mere bank clerk and not the sort of guy to turn the head of a criminal’s girlfriend. Ritzie, though, wants out of the racket. She wants to give up the life of being Thunderbolt’s girl and go straight. Evidently, Bob is a big part of that.

Thunderbolt suspects that there’s another guy in the picture and he doesn’t like that one bit, of course. He’s willing to do anything for Ritzie, except give her up. They go out to a club even though he’s sure the police are tailing her, and when they do raid the club, Thunderbolt runs out, leaving Ritzie behind.

Flash forward a few months and Ritzie has gone back to calling herself Mary and she’s living with Bob and his mother (Eugenie Besserer). Bob loses his job because the bank wants him to make a choice between the job and his girl, and he chooses the girl. But Thunderbolt has been having his goons track her down and they’ve found her. Thunderbolt shows up to kill his rival, but Mary has alerted the police and he’s captured, tried, and put on death row.

It’s actually a pretty interesting setup. There’s a lot of potential for melodrama here, and there is some, most of it coming from Bob Moran’s mother. But the film also wants to make Thunderbolt a real person and does a lot to humanize him instead of making him simply a vicious, amoral killer. The main way this happens is with a dog. A stray dog shows up when Thunderbolt is starting to stalk Bob and there are a few comic scenes with Thunderbolt trying to get rid of the pooch unsuccessfully. Later, on death row, when one of the prisoners gets stroppy and Thunderbolt is the one to calm him down, his reward is being reunited with the dog. It’s actually kind of sweet.

The ending of this one is pretty much pre-ordained. We come to the last few minutes without too many surprises, but that’s okay. Thunderbolt isn’t really about giving us a shocking ending, but a very interesting character study of this particular criminal who will do anything to get someone who he thinks has wronged him, but who also goes through his own moral crisis along the way.

Yes, it’s got its problems. It’s overacted for one thing, although George Bancroft is surprisingly effective throughout. There are still some real connections to the acting style of the silent, and that’s expected, since this is such an early talkie. The prison warden (Tully Marshall) is clearly comic relief, and a lot of this falls pretty flat. It’s not going to turn the heads of a modern audience that much, but Thunderbolt is a bit of a hidden gem for fans of the time and the genre.

If you’re into pre-Code films, you could do a hell of a lot worse than Thunderbolt. Sure, it’s not a gripping story in the modern world, but it’s a good and classy example of where this early genre came from and how it got started.

Why to watch Thunderbolt: Pre-code films are always interesting.
Why not to watch: What happens to the dog?