Rebel with a Cause 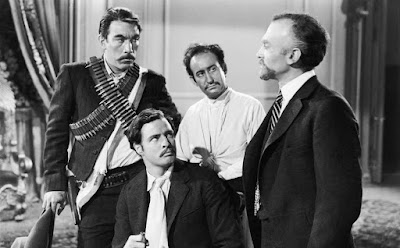 Whitewashing has been a problem with Hollywood movies for a very long time. It still goes on, of course. You don’t need to look further than the casting of British Tilda Swinton as an ancient Tibetan in Doctor Strange to see it. It somehow seems more egregious in older cases, though, where entire collections of people were replaced by white actors in various cosmetics. And it wasn’t just whitewashing. Ricardo Montalban was cast as Japanese at least once. With Viva Zapata!, the crime seems to reach a new height. The title Mexican folk hero is played by Marlon Brando, while the elder brother was played by Anthony Quinn, who was Mexican. Revenge may be sweet, though; Quinn won a Supporting Actor Oscar for the role.

Emiliano Zapata (Brando) begins the film as a simple farmer, who goes with a group of fellow farmers to see long-time Mexican president Porfirio Diaz (Fay Roope) about a land claim. He and his fellow farmers have been kicked off their traditional land by wealthy farmers who have planted sugar cane in their cornfields. Diaz, notoriously corrupt, passes off the farmers’ claims, saying that fixing the problem will take time. The farmers, however, don’t have time—without corn, they won’t be able to eat. Diaz even tries to bribe Zapata with a decent tract of land, but Zapata rejects the offer. Soon enough, Zapata and his brother Eufemio (Quinn) are openly rebelling against the Mexican government.

The Zapata brothers are not alone. Pancho Villa (Alan Reed) rebels in the north of the country, and the various forces unite under the leadership of well-meaning but naïve reformer Francisco Madero (Harold Gordon). Soon enough, the rebellion is successful. Diaz flees the country and Madero is placed in control. Madero, for all of his lofty ideals, is both too trusting and too weak to really be in charge. Shortly after he takes over, having made both of the Zapatas generals, he places his trust in General Victoriano Huerta (Frank Silvera), who is out for power himself. Huerta suggests killing Zapata since he is a dangerous man, but Madero refuses and goes to see Zapata himself. Huerta takes this opportunity to eliminate Madero and declare war on Zapata. A the same time, Eufemio has more or less set himself up as a petty dictator of the area, taking over the land that started all of this rebellion in the first place.

A subplot that runs through the entire film concerns Emiliano Zapata’s marriage to Josefa (Jean Peters, in another case of whitewashing). Her father (Florenz Ames) does not approve of Emiliano, not wanting his daughter to live the life of a common farmer’s wife, especially after her wealthy upbringing. When Zapata becomes a general, his tune changes and the two are wed. Peters managed to get second billing on the film, but her entire role feels like an afterthought here, as if it was necessary to include this part of Zapata’s life either because every movie needs a romance or because it was an additional way to humanize the man.

Viva Zapata! is tells a story that isn’t very new. Reformers rebel against the government, manage to achieve a successful coup, and eventually turn into the men that they first rebelled against. In fact, the thing that makes Emiliano Zapata most noteworthy in the film is that he manages to resist the temptation to become another wealthy landowner oppressing the people around him. When he’s offered a large ranch by Madero for his services, he refuses. When his brother installs himself as a petty tyrant, Emiliano fights against him, siding with the poor farmers who he most identifies with.

One of the more interesting attributes of Viva Zapata! is that it comes with a John Steinbeck screenplay. Steinbeck wrote this directly for the screen, and there are a number of places where it very much feels like a natural extension of other Steinbeck works. His heart is clearly with the peasants here just as it was with the migrants in “The Grapes of Wrath.” Steinbeck’s muse was always the poor and downtrodden. That Zapata became something more does not deter the man here. After all, Zapata (at least according to this screenplay) never forgot his roots.

Brando is good, if not great. The brownface he is forced to act in here is just about as noticeable and just about as strange as that of Charleton Heston in Touch of Evil. Brando handles the role well, but there’s no disguising that nasal voice of his, even when he attempts to slap a Mexican accent over the top of it. It’s initially distracting. I got used to it by the end of the movie.

But I do have to wonder…why Brando? You’ve got Anthony Quinn, born in Chihuahua, Mexico, who had three Mexican grandparents (one grandfather was Irish) as a member of the cast. Why not put him in the lead role? If you really want Brando here, make him Eufemio and give the guy with the heritage and no need for extensive makeup the lead. Quinn could’ve nailed this role.

Then again, he did win the Supporting Oscar, so maybe he got the last laugh after all.

Why to watch Viva Zapata!: Good story, almost in spite of itself.
Why not to watch: That damn whitewashing!.

Posted by SJHoneywell at 8:31 PM