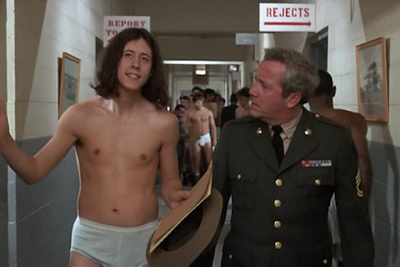 Alice’s Restaurant is one of those movies I’ve put off for a while. I’ve had a copy sitting on my desk for almost a month and just haven’t gotten around to it. I think a part of it is that I was unsure of Arlo Guthrie being enough to carry an entire film. Guthrie, who may well be a decent songwriter and talent in the folk music world, is someone who, it seems to me, is famous because his father was Woody Guthrie. I’m not sure Arlo gets any press or fanfare without his dad opening the door for him.

This is a difficult movie to pin down as well. It’s at least partly autobiographical, as is Guthrie’s song of the same name. The film, since it covers only a small portion of Guthrie’s life, is more a memoir than an autobiography, though, and a great deal here is fictionalized. However, there’s no getting around the fact that this is Arlo Guthrie playing Arlo Guthrie, dealing with the illness and eventual death of his father and with a few other things as well. Sure, it’s a somewhat fictionalized and (mildly) sanitized version of Arlo, but he’s not playing a character. He’s basically playing himself.

It’s also a film that doesn’t lend itself well to summarization. The actual meat of the story doesn’t happen for more than the first hour of the movie. A great deal of the early part of the film is setting up the characters and allowing us to learn a bit about them. There’s a lot of set up here, because we need to establish who Arlo is, who Alice (Patricia Quinn) and her husband Ray (James Broderick) are, why Alice and Ray live in a church, and what Alice’s actual restaurant is. We also need to get Arlo there and introduce a few other characters as well. I’m getting ahead of myself. This is not difficult with a movie that has no real narrative for much of its running time.

So, Arlo Guthrie registers for the draft, but decides it might be better if he went to college instead. He hitchhikes out to Montana and enrolls in college, but his long hair and more hippie-ish sensibilities get him in trouble. Hearing a rumor from his friend Roger (Geoff Outlaw), he heads back east, visiting his hospitalized father Woody (Joseph Boley) and mother Marjorie (Sylvia Davis) before moving on to Massachusetts. His friends Alice and Ray have bought a recently deconsecrated church to live in, and Alice has decided to open a restaurant in town.

Weaved into this is a great deal of the free love/communal philosophy of the late ‘60s. When Shelly (Michael McClanathan) is released from detox, Ray brings him back to the church as well, where there’s a little free love between him and Alice. Shelly is sort of the commune’s group project, and everyone is constantly worried that he’ll once again take up his heroin addiction.

Arlo moves in and out of this group, travelling around playing music and visiting his father, and eventually wandering back to the church to hang out with everyone else. Eventually, Thanksgiving rolls around and people show up from all over the country to have Thanksgiving with Ray and Alice. Once the meal is done, Arlo and Roger load up Arlo’s microbus with the garbage and take it to the dump, but the dump is closed on Thanksgiving, so instead, they dump the garbage by the side of the road on top of another garbage pile. It’s an interesting thing that someone who would seem to be about peace, love, and respecting the planet on the surface has no real issue with dropping—by his own admission—half a ton of garbage down a short cliff.

Anyway, Arlo and Roger get arrested for littering, and eventually Arlo is called before the draft board where he has to spend time with other people with criminal records before it can be decided if he is of suitable moral character to join the army after all. It’s all a bit Kafkaesque in the end, which is I think the entire point of the last third of the film.

But is it any good? I don’t really know. In a sense, Arthur Penn earned his Oscar nomination for this because all of this rambling nonsense actually makes something like a coherent story, or at least is something that can be watched and understood. In many ways, it seems to tell the opposite story one might think—this seems to be about the death of the hippie dream, about how even if some of the ideas were good, they have no real place in the functioning world. This is only underscored by the final shot of the film. Is this what was intended? I don’t know, but it’s certainly what we see.

Ultimately, I can’t get over the fact that Arlo Guthrie looks a hell of a lot like Joseph Gordon Levitt slightly stretched out. That’s neither here nor there; it’s just worth mentioning.

I can’t imagine a need to watch this again, although it was pleasant enough while it was on.

Why to watch Alice’s Restaurant: Parts are pretty entertaining.
Why not to watch: It’s meandering and doesn’t really go anywhere.