A Man Needs a Maid 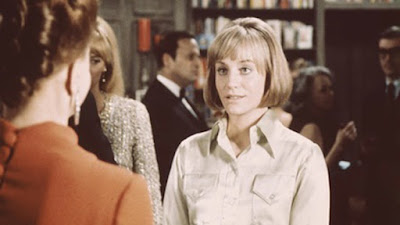 IMDB lists Diary of a Mad Housewife as both a comedy and a drama. Having watched it, if it qualifies as a comedy, it is only as the blackest sort. This movie is absolutely oppressive. Seriously, I’ve seen Holocaust documentaries that were less unrelenting. What we’re going to see is what we see in the opening couple of minutes as the housewife in question, Tina Balser (Carrie Snodgress) is run ragged with doorbells, phones, the dog, and just about everything else in rapid succession.

This is likely going to be a short review because there isn’t a great deal here to talk about. This is, at least the version that I saw, two hours of seeing a woman deal with being trapped in a life that she chose and that turned into something far different than she wanted or expected. Everyone in her life treats here with an astonishing amount of contempt. Not anger, not frustration, but pure contempt. She tries her best to deal with it, but everywhere she goes and everyone she meets treats her exactly the same way.

This starts with her husband Jonathan (Richard Benjamin), a lawyer who is much more concerned with his status and position than he is with anything else. He insults Tina almost constantly, treats her like a servant, and is openly condescending to her all the time. He insults her appearance, her habits, and everything she does while simultaneously demanding that she wait on him hand and foot. As evidence of his status-oriented life, he demands that she pack a suitcase for him for a business trip and specifies his suits and other clothing by the names of the stores where they were bought.

Her children treat her the same way, criticizing her clothing choices, hair, and everything else about her. When workmen come in to fix things in the apartment, they are openly rude and do nothing but complain about her and how disorganized everything is. When her husband gets sick and does nothing but lie in bed and yell for her to come and fawn over every idea she has, she decides to make a change in her life.

That change in her life is George Prager (Frank Langella in his cinematic debut), an acclaimed author who is interested in her for sex and nothing more. As it happens, George treats her with the same sort of contempt that everyone else does. While the affair is sexually fulfilling for her, nothing else about the relationship is, particularly since George is coarse and unpleasant. When Tina is eventually driven to group therapy, she finds the same sort of contempt from everyone in the group and the same sort of shallow opinions and desires.

So that’s what it is for two hours. A woman tries to make sense of a life that seems to have spun completely off the rails surrounded by people who think less of her than they do of their furniture. And then it ends. There’s nothing here that I found funny; I have no idea why whomever wrote this up for IMDB decided that this was a comedy, although in that person’s defense, it’s listed the same way on Wikipedia.

It’s worth noting a weird little piece of trivia regarding this film. Neil Young wrote the song “A Man Needs a Maid” based on it, and it’s one of Young’s saddest and most plaintive songs. The lines “A while ago somewhere I don’t know when/I was watching a movie with a friend./I fell in love with the actress./She was playing a part that I could understand.” is in reference to Carrie Snodgress in this movie. Eventually, Snodgress and Young would meet and have a child together, although they didn’t know each other when this film was released (and now you know why I titled this review this way).

Carrie Snodgress is the main reason to see this. Despite the chaos and unrelenting indignity of her life, she instills a particular dignity in Tina throughout the film. We root for her primarily because everyone in her life is absolutely terrible, but also because Tina is someone that we would like to see happy. It’s a masterful performance, and one that was rightly nominated. It’s also interesting to see a young, pre-Dracula Frank Langella as a dark-haired lothario. See him here and you’ll understand precisely why he was cast as a vampire.

Ultimately, Diary of a Mad Housewife isn’t a film I enjoyed, but it’s one that I respect deeply. I don’t want to watch it again, but I’m glad I saw it for Carrie Snodgress. This is despite the audio problems with the version I found. Really, Carrie Snodgress is worth it.

Why to watch Diary of a Mad Housewife: Carrie Snodgress.
Why not to watch: It’s absolutely unrelenting.