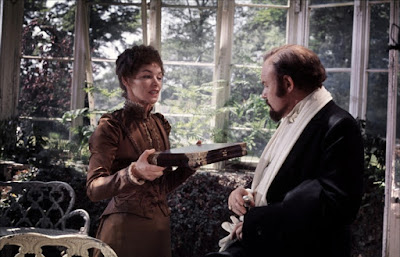 Let’s be honest; I was never going to be a huge fan of Hedda in the best of circumstances. I do my best not to allow the various problems I might have with the version of a film to affect how I feel about it, but that might have been impossible with Hedda. This is one of those films I couldn’t find for the last few years, so when it turned up online, I jumped at it, if only to get it watched before it vanished. The version that is online is not quite in a condition worth watching. The film locks up frequently, and not too long into the running time, it becomes hopelessly out of sync. Eventually, the audio is running 30-40 seconds ahead of the video. Eventually, I treated it as sort of a radio play. But, as I say, even in the best of circumstances, I probably wasn’t going to like this much.

So, what are the strikes against Hedda going in? First, it’s an adaptation of a stage play, in this case, “Hedda Gabler” by Henrik Ibsen. Second, it’s a drawing room drama, which means that there’s not much opportunity to separate the film from the stage play. Third, it stars Glenda Jackson, who has always left me cold for some reason, even when I’ve thought she was good in a particular movie. There’s something about her that’s like biting down on a piece of tinfoil for me. She always comes across to me as something of an ice queen. I’m not sure what it is.

Hedda is a play about intrigue and power on a very personal level. Hedda (Glenda Jackson) has returned to Oslo with her new husband, Jorgen Tesman (Peter Eyre). It’s soon evident that this was more or less a marriage of convenience for Hedda. She doesn’t love her husband, but felt that her youthful days are over and Jorgen will be able to support her in the style in which she has become accustomed. Jorgen is a scholar, and a hard-working, if not very brilliant, one.

Their return is complicated by the arrival of Ejlert Lovborg (Patrick Stewart, with a full head of hair!). Just about everyone has a history with Lovborg. Ejlert was once a rival of Jorgen, but drinking reduced him to something of a joke. It’s also evident that part of the reason for his drinking was his being rejected by Hedda. Now, Ejlert has reformed himself and has recently published a book that has been well-received. He is also being pursued by Thea Elvsted (Jennie Linden), who has left her husband to be with Ejlert.

The problem with Ejlert Lovborg’s resurgence is that he is now in a position to compete with Jorgen for a university professorship. Jorgen and Hedda are deeply in debt, and need for Jorgen to get the position. One night, Jorgen and Ejlert go out drinking with Judge Brack (Timothy West), where Ejlert read from the sequel he is working on to his recent work. The next morning, Jorgen returns home with Ejlert’s book, who lost it. He plans to return the book to his rival, but Hedda convinces him not to. Ejlert confesses that he lost the book to Hedda, who convinces him that, since the book is gone, the best thing he can do is kill himself. She even gives him a pistol to complete the deed, and then burns his manuscript to prevent anyone from finding it. It’s a pure power play by Hedda, ensuring her husband of the professorship, eliminating a rival for him, and also giving herself some control over her own fate.

The problem is that Judge Brack knows more than Hedda would like, including the source of the gun that Ijlert has used, which means that whatever power she had now belongs to Judge Brack. The third act of the play (and the film) deals with how Hedda deals with what is left to her.

It’s a potentially interesting story. There’s lots of intrigue here, and I like movies that turn on this sort of social intrigue. It’s a much more staid and cold Dangerous Liaisons in many ways, and that’s a story I love. My main issue is that I really don’t like any of the characters. I’m not convinced in this case that my dislike of Hedda is specifically related to her being played by Glenda Jackson, but it may be. Jackson, as much as she leaves me cold, is very good here. But none of the characters are likable. Judge Brack is just as conniving as Hedda. Jorgen is a wuss. Thea is also relatively spineless. Ijlert is simply out of control. I didn’t like being around any of them for any length of time.

And so, we’re left with a story where I don’t like anyone in the movie and the version I had to watch came with significant issues. In a perfect world, I’d probably like this a little more than I did, but I can’t imagine I would have liked it much even in the best of circumstances.

Why to watch Hedda: Patrick Stewart with a full head of hair!
Why not to watch: If you can find it, it may not really be worth it.