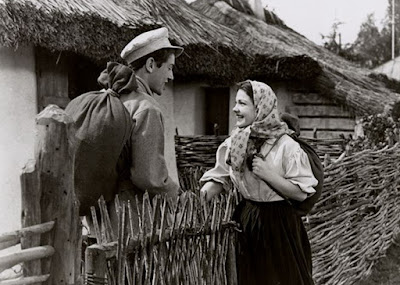 I’ve been hitting a lot of internet-available films lately. There are days when it’s easier to watch something in this format than a more typical one. There is a more serious reason, though. Slightly more than one-third of the movies I have left to watch on my various Oscar lists at this moment are ones I don’t own and that aren’t available through NetFlix. That number is a little better if I include libraries that I can use, but there are still a lot of movies that need to be watched in a different way—more than 25%. Thus, The North Star (often shown under the name (Armored Attack) was on the docket for today.

Since this is a war film from 1943, it should come as no surprise that The North Star is a propaganda film. What makes it particularly interesting is that this is an American production, but concerns Ukrainian peasants, not American troops. The movie skirts the idea of being pro-communist, but it’s certainly pro-Russian. Evidently, The North Star was cited as a premiere example of the sort of thing HUAC wanted to root out of Hollywood. In fact, it’s why the film was released under the different title. As Armored Attack, The North Star has all references to Russian and Ukrainian peasantry removed.

This is also a film that experiences a hard left turn in the middle of it. The first 40 minutes or so are a hell of a lot like Fiddler on the Roof. There are some rumors of war here, but mostly, we spend time with a village of simple Russian peasants. The older children are finishing school for the year and a group of them have decided to hike to Kiev for a vacation. There’s a celebration in the village with lots of singing and dancing, and the next day, a group of five wander off toward the city. There’s more singing here, too.

Of course, the German Army marches into the Ukraine while the group is still on its way to Kiev. In the village, the people create a two-pronged plan of defense. Many of the men head into the hills to work as partisans against the invading force. The rest stay in the village to burn the houses and destroy everything when the Germans arrive. The partisan group is led by Boris Simonov (Carl Benton Reid). Our hiking group includes his sons Kolya (Dana Andrews) and Damian (Farley Granger). As a member of the Russian air force, Kolya’s job is to report to the nearest base to start fighting back. The rest of the group, which includes Damian’s girlfriend Marina Pavlov (Anne Baxter), her friend Clavdia (Jane Withers), and Clavdia’s younger brother Grisha (Eric Roberts) heads back home. The village resistance, incidentally, is led by Marina’s father, Rodion (Dean Jagger). These four are assisted by Karp (Walter Brennan), a local farmer.

The Germans show up with plans to create a hospital in the town. Led by Dr. von Harden (Erich von Stroheim), the hospital is soon operational. Since this is a propaganda film, the Germans are going to be shown as relentlessly cruel and awful. This is done by having them use the local children as unwilling blood donors for transfusions for German soldiers. In many cases, the children are bled to (and beyond) the point of death. This seems to bother von Harden, but not his vicious and petty assistant, Dr. Richter (Martin Kosleck). The local village doctor (Walter Huston) does what he can to keep the children alive, but ultimately tells the partisan group what is happening, not knowing that Boris Simonov was killed by a strafing fighter plane when he was trying to bring guns up into the hills.

The North Star is pure propaganda, and it lays it on pretty thick. We’re not going to have a lot of unwounded survivors from our main characters (although there certainly will be a few), and many of our characters are going to sacrifice themselves nobly in an effort to stave off the German assaults. Even those who wouldn’t normally be thought of as combatants are going to be brutally affected, often to demonstrate just how vicious the invading army is. Rodion Pavlov’s wife Sophia (Ann Harding) has an arm and leg broken because she will not reveal the whereabouts of her husband or the partisans, for instance.

I’m not convinced this is a great movie, although it’s not bad. It suffers terribly from being heavy-handed in many aspects. There’s not even a nod to anything subtle here and there is naturally a great deal of moralizing in the last few minutes. In fact, some of that moralizing may well be what got HUAC upset, since it could be easily construed into being very proletarian-focused and sympathetic to communism. I have to wonder how many of the players ended up in trouble with the committee for even being in the film or connected with it in some way. Both director Lewis Milestone and author Lillian Hellman had blacklist issues, so I guess that’s at least part of an answer.

It’s got a solid cast if nothing else, even if it doesn’t always use everyone to good effect. Still, I’ve seen more blundering propaganda, even if I haven’t seen many with less nuance.

Why to watch The North Star: Surprisingly effective propaganda.
Why not to watch: I wonder how many people involved in this movie ended up being called in by HUAC.

Posted by SJHoneywell at 4:58 PM