Off Script: Blood and Black Lace (Sei Donne per L'Assassino) 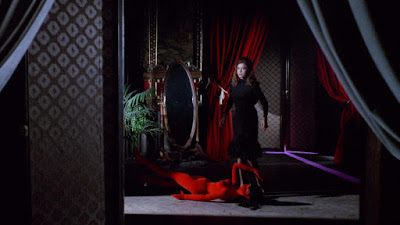 Mario Bava more or less invented the slasher. Bay of Blood is typically thought of as the prototypical slasher film, Bava was starting to build up the style years before. That’s evidenced by 1964’s Blood and Black Lace (Sei Donne per L’Assassino, which translates to “Six Women for the Murderess”), which is also one of the earliest films in the giallo style. This is all about the style and far less about the actual plot, which is also pretty common for films made by Mario Bava.

The sell here is that the murders that are committed, and there are a bunch of them, happen in the context of a fashion house. That might not sound interesting, but it does make for a very interesting visual style. Since Bava spent a good deal of his professional life as a director of photography/cinematographer, this isn’t too surprising. What this means for us is that we get beautiful women in high fashion being brutally slaughtered by a maniac wearing a faceless mask. So, if nothing else, this is a movie that doesn’t look like anything else out there.

But really, that’s it. It’s a short murder mystery where the bodies stack up pretty quickly. The police naturally start investigating, but this doesn’t stop the bodies from piling up. In fact, at one point the police put all of the men associated with the fashion house in custody, but the murders continue. Essentially, we’re supposed to figure out who the killer is until the reveal in the last 20 minutes or so. Of course, since the bodies keep showing up, the possible killers are weeded out as well, and the Italian title certainly starts pointing the finger in one specific direction. We do get the payoff scene where we not only find out the identity of the killer but the motive, so in that respect, Blood and Black Lace is relatively satisfying.

Here’s the thing, though: Blood and Black Lace has the problem that I tend to have with a lot of Italian horror films by directors like Bava, Fulci, and Argento. They are far more concerned with the overall style of the film and the visual appeal of what is on the screen than they are with the plot and what is happening. Lots of things happen that don’t necessarily make sense, because the goal here isn’t so much a coherent plot or characters that act in understandable ways, but in the way that the whole thing appears on the screen.

In that respect, Blood and Black Lace is a straight win. This is a gorgeous film, one that presages such visual feasts as Suspiria. There’s a lot of work with shadow and blocks of color and flashing lights that serve to create a particular mood. The problem is, as I’ve mentioned, that all of this visual “wow” is in service of a story that hangs together by the thinnest of threads.

What it also means for me is that there’s not a great deal to write about on my end. Stylish murders happen that look really good even if they don’t entire fit in with the plot that we’re given. The women being killed are wearing high fashion and thus look like the sort of ultimate horror movie victims. The killer wears a black trench coat, a hat, and a faceless mask. It looks really cool. And then everyone flails around and acts suspicious even if they don’t really have a reason to be. There are a lot of ineffectual characters doing not much but making a great deal of noise to muddy things up. And, after a little less than 90 minutes, it all comes to an end.

I’d seen Blood and Black Lace before, and I get the appeal for a lot of people because it is so damn stylish. One of the knocks against a lot of horror movies is that they are frequently made on the cheap. It’s an easy genre to go to for budding filmmakers because you can get a pretty visceral reaction out of an audience for not a great deal of input in terms of effects. Practical effects often look better anyway. Toss in a few weird methods of killing people—a spiked glove thing, a red-hot stove, and one of the most stylish drownings—and you’ve got a movie with some cheap thrills presented by someone who genuinely knows how to make things look good.

But ultimately, it’s pretty dumb because there are so many things that simply happen because the plot requires them to. At one point, one of the fashion models finds a body in the trunk of her car. Rather than, say, calling the police, she drags the body into her house and tries to hide it behind a screen, but does this so poorly that the body is still easily visible. The killer then goes after her, probably because it was time for another body and not necessarily because she needed to be killed for a real reason. In this instance, the killer smothers her with a pillow. And the victim simply lies there. Oh, she kicks her feet a bit, but apparently being smothered made her forget how to work her arms, since she doesn’t use them to try to fight off the attacker.

So, Blood and Black Lace is great to look at, and it’s important to have a complete knowledge of a couple of film genres, but as a stand-alone film, it’s sadly deficient. I still sort of like it, but it could be so much better than it actually is.

Why to watch Blood and Black Lace: It’s formative for both gialli and slashers.
Why not to watch: Like a lot of Bava films, any ideas of sense and plot take a back seat to style and appearance.

Posted by SJHoneywell at 6:08 PM