Film: The Sundowners
Format: DVD from NetFlix on laptop. 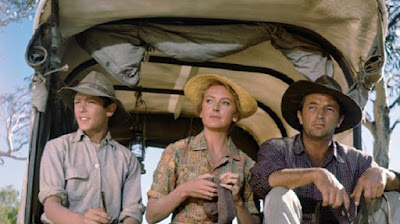 It’s entirely possible that I did The Sundowners a little bit of a disservice by watching it on a laptop instead of on a large television. This is a movie that trades at least in part on the big, sweeping panoramas and massive landscapes of the Australian outback. It’s similar in a lot of ways to a standard Western, although it’s a more modern story. Actually, I’m not precisely sure when the story takes place. I think (although I’m not sure) that it essentially takes place around the time the movie was made, despite the lifestyle of the people depicted.

The Sundowners concerns a family of, well, sundowners. The term refers to people in Australia who are more or less nomads, moving from place to place and taking jobs as they come to them. Specifically, the term means people whose home is wherever the sun goes down on a given day. This family is headed by Paddy Carmody (Robert Mitchum), who is the Australian equivalent of an itinerant cowboy. He frequently works as a sheep drover, moving large herds of sheep to market for shearing. He also often finds work as a shearer, but he doesn’t like that work so much because it means staying in one place for months at a time.

While Paddy is the head of the small family, his wife Ida (Deborah Kerr) is very much the moral center of the family. It’s evident early on that Ida and their son Sean (Michael Anderson Jr.) are growing rapidly weary of the nomadic lifestyle. Ida wants her own place and is tired of living in a tent. Sean wants a farm and a house, two things that Paddy equates with being locked into a specific place and having a mortgage. Every time the Carmodys stop for a night or two, Ida and Sean surreptitiously look for farms that might be for sale.

Really, this is the bulk of the movie. Eventually, Paddy and his family hook up with a drover named Rupert Venneker (Peter Ustinov) who helps them get the sheep to market. Once there, Paddy wants to move on again, but at Ida’s insistence, they all get local jobs. Paddy starts work as a shearer, Sean as a tarboy, Rupert as a wool roller, and Ida as the camp cook. It’s Ida’s intent that with the money they earn, they’ll have more than enough for a down payment on a farm that is for sale, getting her the home she wants. It’s a constant struggle trying to convince Paddy that this is the way things should be, especially when he wins a racehorse in a gambling game, giving him the new idea of touring Australia with the horse and entering it into local races.

Because of this, The Sundowners is more a twin character study of Paddy and Ida than it is an actual story. The entire point of the movie is to slowly see Paddy’s realization that his family is tired of being constantly on the move and sleeping in a tent (actually, Sean tends to sleep outside in most cases). While Paddy wants to make his wife happy, he’s never been ready to give up the life that he’s living, seeming to not quite understand that eventually he may well get too old to continue moving from place to place.

Deborah Kerr earned a nomination as Ida Carmody, and it’s an interesting nomination, because I can see arguments both for and against it. It’s a strong role in that as Ida, she has to stand up for and defend her husband and the lifestyle that he has chosen and simultaneously try to push him gently into the lifestyle that she wants. She’s forced to deal with the constant struggle of him saying one thing and then sabotaging all of her plans and ideas with his actions at every turn. She plays the role well. The other acting nomination went to Glynis Johns in the role of a saloon keeper who becomes the romantic attraction for Rupert Venneker. She’s good, but I don’t see anything particularly noteworthy in the role. I am a little surprised that Peter Ustinov was overlooked, because he’s as good as he always was. Rupert is a fun character who at times offers some surprising wisdom in Ustinov’s trademark accent.

Overall, though, The Sundowners seems like the sort of film that earned Oscar nominations because it involves big landscapes and appears to be about people on an epic backdrop. It’s really not, though. It’s a small story told in a big space, and while the scenery is often beautiful, we’re often focused on the small lives and small concerns of the people in that huge landscape. It’s a faux epic, something that appears to be massive in scope, but is simple a little story painted on a very large canvas. That we end up almost literally where we started doesn’t help in that respect. Oh, there’s a change in one sense, but in most ways, we actually don’t go anywhere.

Why to watch The Sundowners: A sweeping story.
Why not to watch: It doesn’t really go anywhere cohesive.