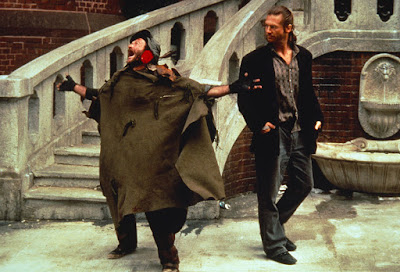 In a lot of ways, Terry Gilliam is the Orson Welles of today. I like Gilliam a lot and have liked his work since I was a kid. I loved Monty Python (even named a dog after the show), and I remember my mother saying that she thought the show was funny, but hated the animation. I loved the animation, which was all Gilliam’s work. One of Gilliam’s most famous projects is the one about Don Quixote that he never completed. There’s a touch of synchronicity in this, as Terry Gilliam is himself a fairly quixotic guy. He’s tilted at the windmills of studios for most of his career and a lot of his films have a large fantasy element to them. Like Welles, Gilliam’s quixotic nature is at least partially self-inflicted. The Fisher King is heavily influenced by Arthurian legend, which makes it something of a return—a far less comedic one—to Monty Python and the Holy Grail.

Jack Lucas (Jeff Bridges) is a popular talk radio personality loosely modeled on Howard Stern. He’s rude to his callers, but funny. One day, just has he’s about to break into acting on a sitcom, an off-hand remark to a caller causes a tragedy. The caller takes Jack’s comments about a war against Yuppies literally and takes a shotgun into a nightclub and kills seven people before turning the gun on himself. It destroys Jack completely. Three years later, Jack and his girlfriend Anne (Mercedes Ruehl) are living over the video store she owns and Jack is frequently drunk and just as frequently unable to deal with people.

One night, after drinking, Jack decides to kill himself. Before he can, a couple of punks mistake him for a homeless person and in their attempt to “clean up the city,” douse him with gasoline and try to light him on fire. Jack is rescued by Parry (Robin Williams), a schizophrenic homeless man who believes himself to be a knight on a quest for the Grail, and who believes Jack has been sent to help him. Naturally, Jack is put off by this, but comes to feel responsible for Parry’s condition when he finds out that Parry’s mental state was caused by the death of his wife at the hands of Jack’s suicidal talk show caller. Parry suffers frequent delusions of fairies and of a red knight who seems to be sent to block him on his quest.

Jack discovers that Parry is obsessed with not just the Grail, but also with Lydia (Amanda Plummer), an accountant for a publishing house based in Manhattan. Jack jumps through a few hoops to get her to come to the video store, including a tremendously funny cabaret number performed by homeless singer (Michael Jeter), then plants Parry as an employee of the store so he can meet her.

It’s here that I started to have some reservations about The Fisher King. Movies often don’t do romance well, and The Fisher King does it badly. Parry, Lydia, Jack, and Anne all end up going out to dinner, and Parry walks Lydia home. After she attempts to brush him off, not wanting a one-night stand with him, Parry essentially confesses just how obsessed he is with her, basically demonstrating that he’s been stalking her for months (which he has). This is interpreted by the film as a romantic gesture, but it’s decidedly creepy in the modern world, where this sort of behavior doesn’t end with a first kiss, but with a restraining order.

After the romantic interlude, we eventually get back to the quest to capture the Grail, which Parry believes is in the possession of a billionaire living in the city. This is actually pretty interesting, and is given too short of screen time for what it could be. The Fisher King isn’t a short film, but the ending feels a bit truncated to me, since a great deal is devoted to the romance between Parry and Lydia.

I have one significant problem with The Fisher King beyond the time spent on a romance that is ultimately a bit creepy. It’s that in many ways, the film trivializes mental illness. Essentially, we’re told that there’s some sort of key that will cure someone of severe mental illness—that if something is made right, everything goes back to normal. I hate being pedantic with things like this, but it’s this sort of depiction that makes people dealing with things like depression seem somehow weak or like malingerers by people who aren’t dealing with it. Parry has broken from reality through much of the film, and having him more or less snap out of it belittles the real struggles that people have.

Robin Williams was nominated for Best Actor for this role, and I think perhaps the nominating committee got the right film but the wrong actor. Williams is good in this, as he usually was with good material, but it’s a film that in very many ways plays to his strengths, allowing him to be almost a cartoon character on screen. It’s Jeff Bridges who deals with more complex issues throughout and who is ultimately a lot more interesting. But it’s Mercedes Ruehl (who won for Best Supporting Actress) who steals the show. She is in many ways the emotional center of the film, not merely standing by her man, but being willing to be hurt by him so that she won’t be destroyed by him. She’s got some wonderful moments in the last 40 minutes here, and I can’t think of any way she could do this better.

Is The Fisher King good? Yes. But it’s not as good as I was led to believe, and it lacks the bite of Gilliam’s best work.

Why to watch The Fisher King: No one makes films like Terry Gilliam.
Why not to watch: It trivializes mental illness in some disappointing ways.