Film: Easy A
Format: DVD from NetFlix on laptop.

This is the twelfth in a series of twelve movies selected by Nick Jobe. 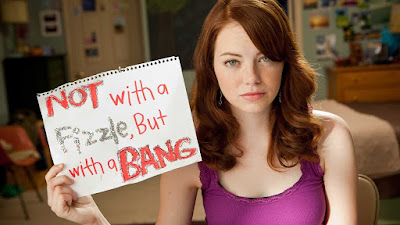 Teen comedies aren’t easy to do well. This is evidenced by the vast amount of teen comedies that are light on the comedy. Many of the best ones get help by more or less co-opting classic stories and putting a teen spin on them. Enter Easy A, a modern teenage version of “The Scarlet Letter” with the twist that the action that earns our heroine the metaphorical (and eventually literal) letter is entirely a fiction, a lie that went out of control. Hey, if you’re going to crib from someone, you may as well crib from a classic, right?

High schooler Olive Penderghast (Emma Stone) finds herself in the position of school nobody…and immediately I take issue with Easy A. High school may be multiple decades in my past (my 30-year reunion is in the rearview mirror), but I remember enough of it. I remember enough to know that if Emma Stone was walking around in a high school, she’d have to have the equivalent of social rabies to be completely ignored. But hey, let’s ignore that for the time being. We have a movie to look at, and if that’s the biggest problem with it, well, we have a pretty good movie to look at.

Anyway, Olive is invited to go camping by her friend Rhiannon (Aly Michalka, also too impossibly attractive to be a teenage outcast) and her hippie parents. Needing a way to beg off the trip, Olive invents a date with a freshman in college. She instead spends her weekend at home, but on Monday, pressured by Rhiannon, Olive accidentally admits to losing her virginity despite the fact that the guy in question doesn’t really exist. Unfortunately for Olive, the conversation is overheard by the high school’s equivalent of the Christian Taliban, Marianne (Amanda Bynes).

And suddenly, Olive is the school tramp. When a gay student (Dan Byrd) comes to her and begs her to lie about the two of them hooking up, she agrees to help him out, and the two fake having sex at a party. And with that, the rumor mill starts churning. Suddenly, Olive is the school slut for the majority of the students, but the school’s nerdy underclass knows the truth. Olive sets up a little business for herself, allowing social rejects to claim they had sex with her in exchange for gift cards. Deciding to go full-bore with her new persona, Olive decks herself out in highly sexualized clothing and sews a red “A” on everything, essentially transforming herself into Hester Prynne, which happens to be the book she is studying.

Along the way, Olive also uncovers her own share of dirt, including an affair between hyper-religious Marianne’s boyfriend (Cam Gigandet) and the school guidance counsellor (Lisa Kudrow), who happens to be married to Olive’s favorite teacher (Thomas Haden Church). Toss in small roles for Malcolm McDowell as the school principal, Fred Armisen as a local pastor, and Stanly Tucci and my beloved Patricia Clarkson as Olive’s parents, and you have a movie with a monster cast, a solid plot, and even an attempt at a comedy version of a morality play.

So what’s the problem? Well, there is a problem here, and it’s the kind of problem it’s difficult to fault Easy A for too much. It’s simply too clever. I expect that the personalities will be larger than life in a typical comedy, and that’s definitely the case here. Everyone is turned up to 11 all the time. In that respect, Easy A reminds me a great deal of Juno, which is also a movie that is too clever for its own good. Easy A gives up any attempt at realism to go for being smart beyond its high school years. I get that. It’s probably even the right choice for this movie, but it still makes the world of the film something that doesn’t exist outside of the film itself.

So, really, the biggest problem with Easy A is that it doesn’t track to reality at all. And I’m pretty much okay with that. The story is good enough that the departure from anything like the real world is more or less warranted. It takes the piss out of a lot of people, and I like it for that. It completely takes the piss out of the holier-than-thou clique, and I love it for that. Sure, my high school days ended in the ‘80s, but I grew up in the town that, according to the wonks at Trivial Pursuit, has more churches per capita than any other town in America (check out the Wikipedia page for Wheaton, IL, if you don’t believe me). I’ll forgive a hell of a lot more than an alternate reality to see the Jesus posse knocked down multiple pegs.

So, it’s a solid win, Nick. It’s not perfect, but it’s entertaining.

As a final note I won’t be doing any list challenges for next year. I’ll explain that in more detail in about 12 days.

Why to watch Easy A: It’s smarter than it has any right to be.
Why not to watch: Like Juno, it’s a little smarter and hipper than is plausible.

Posted by SJHoneywell at 9:54 PM