Off Script: La Horde (The Horde)

Film: La Horde (The Horde)
Format: Streaming video from NetFlix on The Nook 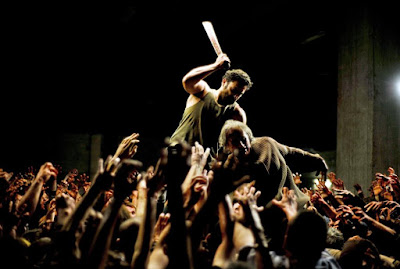 While it’s not entirely true that if you’ve seen one zombie movie you’ve seen them all, there is a kernel of truth in that assessment. Most of them start with the beginning of the infection where the main characters slowly figure out what’s going on. A few of these people will be bitten at some point to give us the convention that a bite leads to the victim turning into a zombie. A couple of zombies early on will soon turn into a mass of them, and victims toward the end of the film will not be merely bitten but completely devoured. There are a few films that attempt to do something new with the genre. More frequently, there are films like La Horde (The Horde) that offer a different starting premise and follow the same traditional path.

La Horde starts from the premise of The Raid: Redemption. A cop has been killed by a drug lord and now four cops are going for some revenge. This is a completely unofficial raid bent solely on the idea of vengeance. The drug lord, Adewale Markudi (Eriq Ebouaney), his brother Bola (Doudou Masta), goon Jimenez (Aurelien Recoing), and a few others have holed up in a mostly-abandoned and condemned building.

A few minutes into the raid and a couple of the cops are wounded and all of them are in the control of Markudi and his crew. Ah, but this isn’t going to be a quick killing off of the police because shortly after this, the dead start rising and attacking. After a frenzied battle, Bola and his remaining crew and three cops—Tony (Antoine Oppenheim), Ouessem (Jean-Pierre Martins), and Aurore (Claude Perron, and don’t let the name fool you; Claude is a woman) are forced to team up to possibly survive the increasingly large, well, horde of ravenous undead.

And really, what follows is pretty standard for zombie films. The only real difference here in terms of what we’re given is that these are fast zombies, albeit uncoordinated zombies. This means running chases rather than slow pulls back to safety and secured areas. The fast zombies do add a bit of tension to an already tense situation, but I am more of a zombie purist. I like them slow because I like the contrast. One slow zombie is comic; a thousand are terrifying. With fast zombies, they’re always a threat, and I think that mucks with the pacing of the film.

La Horde, since it’s not going to go anywhere new or original in terms of the events of the film, focuses instead on wild action sequences, featuring a surprising amount of close combat between the living and the undead. We get several full-on melees between one person and one zombie or two zombies, which culminates with one person standing on top of a car fending off a huge mass (see the picture above). There are also some tremendously entertaining sequences involving an old survivor named Rene (Yves Pignot) mowing down rows of zombies with a huge machine gun.

But really, there’s not a lot new going on here. There are zombies. There are people with guns trapped by the zombies. The people with guns attempt to fight their way out. A bigger problem is that out trapped people with guns are surprisingly stupid. When the first zombie appears, the thugs shoot it literally dozens of times, emptying multiple pistol clips into it. It’s not until Adewale blows its head off (or at least everything from about the nose up) that it stops attacking. From this point forward, they continue to shoot for the body, which means that every zombie they fight gets put down only by accident or when it has had enough lead put into it to render it unable to move. They do this even when it has been established to their satisfaction that headshots are the only thing that works. Does this increase the tension of some of the zombie attacks? Well, it should, except that I couldn’t get over thinking just how stupid all of them are, and this stupidity gets them killed off in rapid succession.

There are interesting things that can be done with the zombie genre, or at least the trappings of the zombie genre (I don’t want to get into a …28 Days Later discussion). The base idea of La Horde is initially interesting, but at its heart, the changes are really only on the surface. In a real sense, except for the speed of the zombies, there’s not much here that’s too different from Dawn of the Dead. That’s disappointing, because there should be enough in the genre for this to be made interesting.

There’s also a massive plot hole here. The building our cast is holed up in is mostly abandoned. It’s in the middle of nowhere. So where the hell do all the zombies come from? And why do they congregate at this building? Why? Because that’s what the plot needs.

Why to watch La Horde: The Raid: Redemption + zombies.
Why not to watch: There’s nothing you haven’t seen here.