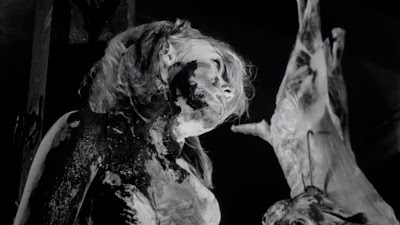 Roger Corman might be known for low-budget schlock, but you have to hand it to the man: he was if nothing else a great judge of directorial talent. Among his protégés is the great Francis Ford Coppola, a man who in many ways defined American film in the 1970s. Corman gave Coppola his start, and a large part of that start came in the film Dementia 13. Coppola punched out a short script over three days and filmed using the same sets and actors as another of Corman’s films provided he could do things on the cheap and work around Corman’s shooting schedule.

The result of those constraints gives us a film that shows a good deal of ambition but also shows all of the strings and gaps of needing to work on the quick with actors involved in another film. Personally, I find it interesting to see the work of a director best known for feats of cinematic brilliance like The Godfather Trilogy, Apocalypse Now, and The Conversation making a film that hints on the supernatural and involving an axe murderer and a woman swimming in her lingerie. There’s something wonderfully lurid about it.

Dementia 13 begins with a midnight rowboat trip of married couple John (Peter Read) and Louise Haloran (Luana Anders). They are discussing the will of John’s mother Lady Haloran (Eithne Dunne). Lady Haloran has determined that the bulk of her fortune will be donated to charity in the name of Kathleen, a daughter who drowned a number of years earlier. Louise naturally wants the will changed, especially because she won’t even be allowed at the family’s Irish castle should John die before his mother. John then promptly dies of a heart attack in the middle of the lake. Louise, thinking quickly, tosses his body over the side, writes a letter from her husband about being called away on work, and disposes of some of his personal items.

Lady Haloran is mired in supernatural beliefs and holds a repeat of Kathleen’s funeral every year on the anniversary date. This year (obviously) John won’t be there, but Louise decides that it’s the perfect opportunity to play with Lady Haloran’s head to see if she can arrange for something new in the will. She’ll also have to deal with her brothers-in-law. Richard (William Campbell) is a sculptor and engaged to Kane (Mary Mitchel) of whom his mother disapproves. Younger brother Billy (Bart Patton) doesn’t seem to have much of a profession. Also prowling around is Dr. Justin Caleb (Patrick Magee), who serves as our detective trying to get to the bottom of things when life around Castle Haloran starts twisting out of control.

Interestingly, Dementia 13 takes a page straight out of Psycho. Louise schemes to convince Lady Haloran that the late Kathleen is contacting her from beyond the grave. She sneaks into Kathleen’s bedroom and steals some of the dead girl’s toys, hoping to plant them in the pond to float up as a sign. This happens midway through the movie, and so it’s a bit of a shock when our main character to this point and the only person whose thoughts we know gets full-on Marion Craned with an axe while climbing out of the water.

Dementia 13 gets good use from its locations, one of the main aspects of the film that raise it above the level of a student film. Coppola, though very young (early 20s) when this was made also shows some inklings of what would eventually turn him into a great director less than a decade later. There’s good camera work here, and a surprising amount of spooky tension built from simple shots of children’s toys. One of the best effects comes early on when Louise dumps John’s body over the side of the rowboat and tosses in his radio after him. The sinking radio, still playing early rockabilly, is really creepy.

There’s the guts of something here. Dementia 13 suffers from the way in which it was made. With more time to work on the script and tighten it up, especially the dialogue, a bit more of a budget and less restrictive filming conditions, it could turn into something rather good. Patrick Magee classes the whole thing up and he does what he can, but no matter how hard he tries, this will always be just a weird little thriller that has more ambition than cash and quality behind it. What it is is some good ideas put together as well as could be expected in the conditions. Flesh out some of the characters and add 15 more minutes to the spare plot, and this would be more than a strange little footnote in the career of Francis Ford Coppola.

Why to watch Dementia 13: A formative, early film of one of the definite director of the 1970s.
Why not to watch: It shows ambition but also shows inexperience.