Trial of the Century 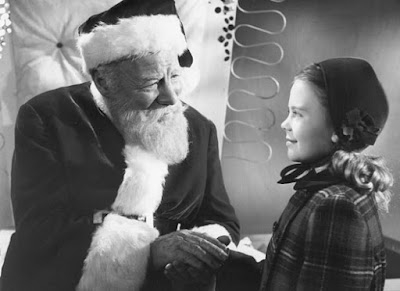 Everyone, or almost everyone, has a favorite Christmas movie, at least in the U.S. where Christmas is pretty much universally celebrated. Gun to head, I’d cite Die Hard since it takes place at a Christmas party, but for Christmas-centric films, I’d go with A Christmas Story. It’s difficult to discount the singular joy of older holiday films, though. Of those, It’s a Wonderful Life is almost certainly the most commonly cited favorite, but there is a minority like me who prefer Miracle on 34th Street.

I find it difficult to believe that there are people unfamiliar with the basic story here, but just in case, I’ll offer a quick rundown. Doris Walker (Maureen O’Hara) is the divorced mother of young Susan (Natalie Wood). Doris works for Macy’s, and among other things, is in charge of the Thanksgiving Day parade. The Santa Claus she has hired for the parade has turned up drunk, so she hires a replacement on the spot. The problem is that the replacement calls himself Kris Kringle (Edmund Gwenn) and truly believes himself to be Santa Claus. Despite this, he is immediately hired to be the Macy’s Santa Claus in the store.

Oh, there’s more of course, but that’s the basics. There are two main stories in Miracle on 34th Street. The first concerns Kris (naturally), who seems to be a sweet, mildly deluded old man. Okay, significantly deluded, but in a purely harmless way. He is all about the spirit of the holiday. In fact, when children ask for something that Macy’s doesn’t carry, he recommends the customers go to other stores, even Macy’s main competition, Gimbel’s. While this causes a great deal of distress in toy department manager Julian Shellhammer (Philip Tonge), it soon reveals itself to be a huge public relations boon, and soon every department is doing the same, as is the competition.

The issue is Mr. Sawyer (Porter Hall), who works in the equivalent of the human resources department at Macy’s. Sawyer is convinced that Kris is dangerous. He’s also convinced that just about everyone who isn’t him has some sort of deep psychological problem, focusing a great deal on young Alfred (Alvin Greenman), who sweeps up in the store and enjoys playing Santa Claus for the local YMCA. When Kris gives Sawyer a thump on the head out of aggravation, Kris is taken away to Bellevue for observation, and his cause is taken up by lawyer Fred Gailey (John Payne), who is Doris’s neighbor and evident suitor.

The second plot concerns Susan. Doris has done her best to educate her daughter in a more realistic view of the world, which means no fairy tales, no fantasy, and definitely no Santa Claus. Naturally, as a man who thinks he is Santa Claus himself, this strikes Kris the wrong way, so he undertakes to make both Susan and Doris believe he is the real deal.

A great deal of Miracle on 34th Street is entertaining set up, getting us to know the characters and know what the characters are like. The payoff is the final half hour of the film, where Kris is put on trial to determine his sanity, with Fred Gailey pleading the case that he is not merely a sane man, but is actually Santa Claus himself. This final half hour introduces us to several more important characters—the prosecuting attorney (Jerome Cowan), the presiding judge (Gene Lockhart), and the judge’s political advisor (William Frawley). All three are just about perfect in their roles, attempting to make sense of what can only be described as a ridiculous situation.

But this is Edmund Gwenn’s film from top to bottom, and he deservedly won the Oscar for Best Supporting Actor in this role as Kris. How good is Gwenn? When you think of the idealized version of Santa Claus, you’re thinking of Edmund Gwenn from Miracle on 34th Street whether you have seen it or not. He is the absolute embodiment of Kris Kringle, a role so perfectly filled that it is nearly impossible to think of someone else taking over the role or playing a traditional Santa Claus in any other way. Every moment, from him singing in Dutch with a recently-adopted orphan to teaching Susan how to pretend to be a monkey, is perfect. If the rest of the movie were terrible (it isn’t), this would still be a holiday classic for how wonderful it is to see Edmund Gwenn inhabit the spirit of Christmas this perfectly.

I’m going to dip into spoiler territory here, so if you really aren’t familiar with this story or this movie, you’ll want to skip down a paragraph. For me, there is no single moment in a Christmas film that gives me more joy than watching hordes of mail carriers delivering bags upon bags of mail for Santa Claus to the desk of Judge Henry X. Harper. It’s played beautifully by all parties involved and always makes me laugh.

Look, Miracle on 34th Street pushes a poor epistemology, demanding belief over evidence. In the real walking around world, I object to that because it’s the sort of thinking that gets us witch burnings and people who claim to know the thoughts of a higher power. But for Christmas, I can forgive it that. Every once in a while, it’s okay to let a kid have a dream and think something might really be magical. Even the Grinch’s heart grew three sizes, dammit, and this is one of those times when everything else is too perfect to fault a little fantasy.

Why to watch Miracle on 34th Street: This is what Christmas should be.
Why not to watch: Bad epistemology.