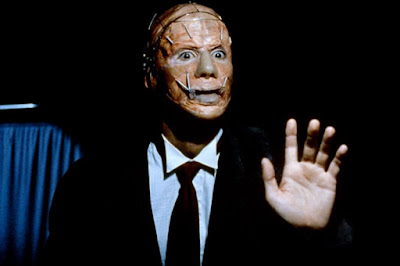 The traditional horror movie puts a group of people in a specific location with someone or something that wants to kill them. Often, the thing that is trying to kill them is what makes the movie different. Every now and then you get something like Popcorn that really tries to do something interesting with the premise. Popcorn is all about the premise, because what follows the premise is pretty standard slasher fare.

We start with Maggie (Jill Schoelen), a film student at a college that has a fledgling film school that frequently gets the monetary short end of the stick from the rest of the school. Maggie has been plagued with strange dreams that she is taking notes on in the hopes of turning it into a film. At school that day, the film professor Mr. Davis (Tony Roberts) and a student named Toby (Tom Villard) have come up with a plan to raise funds for the department. They’re going to stage a triple horror feature at a theater a few weeks away from demolition. The idea specifically is to select films that were marketed with gimmicks (one involves electrified seats as in The Tingler). The work gets easier thanks to Dr. Mnesyne (Ray Walston), who had a long career in theater and a huge collection of old timey props to use to decorate the theater.

As they go through Dr. Mnesyne’s props, they discover an old film canister. Since these are film students, they run the film and discover a weird old art film called Possessor that looks shockingly like the dreams that Maggie has been having. It turns out that Possessor was made by a man named Lanyard Gates (Matt Falls), whose earlier films were laughed off the screen. In retaliation, Gates created Possessor. At the climax of the film, Gates killed his wife and child on stage and then set the theater on fire, killing many and injuring more. Maggie’s mother (Dee Wallace Stone) has been getting upsetting phone calls, which means that our burn victim, family-killing lunatic might not be as dead as people seem to suggest.

One thing that Popcorn does well is pay homage to those films that it wants to call back to. It likes them enough that it shows three fake old horror movies that were clearly created for this film, and they’re obviously having a good time spoofing giant monster movies and William Castle-style gimmicks. It’s nice seeing filmmakers who really like the genre they are working in and are doing something that on some level respects the knowledge of the audience. Anyone who loves classic 1950s sci-fi/horror will get a little kick out of these snippets, particularly Mosquito, the first of the films shown.

The problem is pretty much everything else. Popcorn really wants to be a unique and original horror film and it does have some genuinely good ideas. The bad guy/monster has a great look, for instance. Since he’s a burn victim, there’s a lot of work with masks and face swapping, and this is a pretty interesting aspect of the film. The problem is that Popcorn wants to bill itself as a horror comedy and it’s not really that funny. Most of the comedy falls pretty flat, and while that desire is definitely there, the comedic moments are not really that different from the comedy moments of any horror film.

The characters aren’t very interesting either. Only Toby seems to have any personality and our main character, Maggie, is pretty bland and uninteresting. She realizes pretty quickly on the night of the film festival that someone who looks a great deal like Lanyard Gates is still alive, knows who she is, and appears to be stalking her, and this doesn’t really seem to concern her very much. In fact, her main reaction is to talk about just how great of a film this would make. When her boyfriend Mark (Derek Rydall) shows up at the film festival with another girl hanging off of him, Maggie is only mildly distressed. She’s not even interesting enough to get mad.

The most egregious problem of the film, though, is the low body count. With a whole theater full of potential victims and a tremendous opportunity for mass carnage, I can count all of the deaths on one hand. Sure, a couple of them are pretty good, but seriously, for a movie that promises classic horror movie thrills, Popcorn doesn’t deliver.

I can admit that there is a certain charm to the film, but not nearly enough of that charm to make the film work for me. I wanted to like Popcorn a lot more than I did. The promise is there, but the promise is left unfulfilled.

Why to watch Popcorn: It’s a love letter to classic horror.
Why not to watch: The idea is better than the movie.