Film: The Man Who Would Be King
Format: DVD from Sycamore Public Library on laptop. 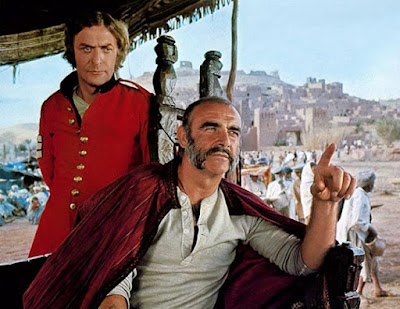 I can’t claim to know a great deal about the works of Rudyard Kipling, which makes approaching a film like The Man Who Would Be King quite a bit like most of the adapted screenplays I come to. What I know about Kipling is that a lot of his stories take place in India and have a specifically British bent to them. That’s at least partly the case here. What makes this one interesting is that the filmed version actually includes Kipling as a character. Essentially, he’s a framing device, and the story we’re told is given to us as an actual story, something that we’re to take as truth.

As the film begins, we’re introduced to Kipling (Christopher Plummer) as he encounters a terrible apparition from his past. That man introduces himself as Peachy Carnahan (Michael Caine), someone who Kipling met several years before. We get the heart of that meeting, which involves Peachy stealing Kipling’s watch and then discovering that Kipling is a fellow Mason, forcing him to return it. Based on that Masonic connection, Peachy asks Kipling to contact a man named Daniel Dravot (Sean Connery) and tell him that Peachy has headed south. Kipling does so.

The two show up at Kipling’s office later and ask him to witness them signing a contract. That contract charges the two men to avoid all alcohol and women until they have achieved their stated goal. That goal is essentially to become kings in Kafiristan (now modern-day Afghanistan), something they think they can accomplish, provided they can actually get to the place they want to get to. Their goal is to smuggle in some rifles and find a local warlord they can back. Once they have helped that warlord destroy his enemies, they topple that warlord and take over, hopefully acquiring a great deal of treasure in the course of this, and then leaving back to England as wealthy men.

We get a bit of their trip with a couple of adventurous elements and eventually, the pair do arrive in Kafiristan. At the first village they come across, they find a warlord who happens to be assisted by a Gurkha soldier named Billy Fish (the great Saeed Jaffrey), who immediately falls in line with a couple of British soldiers. Within a few moments, the plan goes into effect and both Peachy and Daniel are leading troops against a neighboring village. During the course of the battle, Daniel is struck by an arrow, but the arrow lodges in his bandolier. What the people see is that he was hit by an arrow and left completely unharmed. So now, Daniel is not merely a king, but a god. Specifically, he is believed to be the son of Sikander, the local name for Alexander the Great, and because of this, conquest of the entire area happens without much in the way of battle.

The second half of the film is more or less a description of how all of this goes to smash. The main reason for this is that Daniel, more or less, begins to believe his own press. The more that the locals treat him like a god, the more he thinks that everything that has happened, all of the coincidences and different events aren’t coincidences and are somehow evidence of a greater plan. No longer content to simply run off with the treasures that they have collected—which now include all of the treasures left behind by Alexander the Great—Daniel has decided to stay and rule over these people in the hopes that someday he will be presented to Queen Victoria as an equal, as royalty and the ruler of his own country.

And that’s really what The Man Who Would Be King is about. It’s about the dangers of hubris and the dangers of building up something as a grand lie. It’s a good story, particularly because all of it makes a certain sense as it plays out. Sure, there are a couple of coincidences, like the arrow in the bandolier and another moment of Masonic serendipity, but these are completely believable and work with the greater narrative.

It’s the casting that works so well here. Christopher Plummer is good as Kipling even if he’s not given a great deal to do but sometimes look amazed or shocked. It’s Connery and Caine who make the movie, though, and I can’t think of two men better suited in 1975 to handle these two roles. They are perfect in them and a great deal of the reason this works at all is because they are not just excellent actors, but actors who seem to be naturally suited to inhabiting these roles. It’s also worth noting just how damn entertaining Saeed Jaffrey is as Billy Fish, who is one of the most entertaining characters in the film.

I like The Man Who Would Be King pretty well, and I knew that going in, since I watched this a number of years ago. I had forgotten just how dark it gets in the last 15 minutes or so, but even that works for the story that we’re told. It can be a bit off-putting if you’re not expecting it, but again, where this goes feels natural, so it works nicely.

Why to watch The Man Who Would Be King: A boys’-own style of adventure.
Why not to watch: It’s as dark as it gets by the end.

Email ThisBlogThis!Share to TwitterShare to FacebookShare to Pinterest
Labels: action, Best Adapted Screenplay, John Huston, The Man Who Would Be King