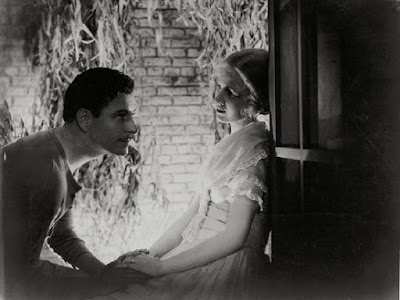 There’s a simplicity to early talkies that is attractive. While movies weren’t new, sound in movies was, and that meant that so much focus was put on that new innovation that plots were often simple, east-to-follow, and entertaining because of it. A single complication, typically associated with a romance, and you’ve got enough for something close to 90 minutes. Sure, they often tended toward melodrama and also had acting that was geared toward the back of the theater, but when they’re done well, there’s a particular charm to them. Condemned, which I found on YouTube today, is one of these movies, and it’s a pretty darn good one.

As mentioned in the paragraph above, the plot here is almost painfully simple. We start by witnessing prisoners being transferred to Devil’s Island, the French penal colony in Guyana. We’re then introduced to our main players. We have the warden, Jean Vidal (Dudley Digges), who is constantly upset with his wife, Madame Vidal (Ann Harding, and no, we don’t get a first name for her). His main problem is that he is ashamed that, as the wife of a prison warden, she demeans herself by doing all of the work around the house and won’t let him conscript a convict to act as combination butler/housemaid.

We also are introduced to a few of the convicts, but really, only a couple of them are going to be important. The first is Jacques Duval (Louis Wolheim), a convicted murder who has been given a life sentence. The second is our main character, Michel (Ronald Colman), an elegant and surprisingly high class thief. Michel’s more high-class manner and looks catches the attention of Vidal, who chooses him to be the houseboy/butler/servant he is convinced that his wife needs.

What happens is pretty easy to guess. We learn that Madame Vidal has lost her enthusiasm for her marriage because her husband has changed a great deal. We learn that Jean Vidal is something of a tyrant, especially as it concerns his wife. And because Michel is played by Ronald Colman, he is elegant, suave, and dashing. So it’s no surprise that Madame Vidal and Michel are soon pining for each other, not that they really act on it despite being alone together all day every day. Michel seals the deal by purchasing a pet monkey for her, something she wants but is more or less forbidden to have by her domineering husband.

What’s really interesting here is that Vidal discovers his wife’s suspected infidelity with a great deal of time to go in the film. He learns of this when he sees a gaggle of local women peeking over his garden fence hoping to catch sight of the suave Michel, and hoping even more that the two are canoodling. Soon enough, Vidal has decided that Michel should no longer be working in his house and that his wife should be returned to France as soon as possible. When he calls Michel into his office to accuse him of cuckolding him, Michel punches him in the face, which earns our debonair prisoner six months in solitary.

Remember Jacques? He and Michel have become friends, and he decides that he’ll do what he can to help the two get back together. This means figuring out a way to get Michel out of solitary and get him to the boat that is taking Madame Vidal back to France.

There’s a great deal that makes Condemned really interesting. The first is that while Jean Vidal is a martinet and perhaps a bit cartoonish and melodramatic as a victim, he is not an idiot. He is capable of figuring out the plans of Michel and Jacques and acting to stop them. It would be simple to make him either stupid or nothing but vicious, but there’s a bit more to him than that.

This is pretty melodramatic, though. That’s not too surprising since this is a baby step out of the silent era. Ann Harding is particularly exaggerated as the romantic interest, willingly professing her love for Michel to her husband without really needing to be prompted. She’s constantly a-twitter or gushing. As for Ronald Colman, his job is to be impossibly sophisticated and, as Ronald Colman, he does this well. On anything past the surface level, there’s not a lot here that works. Things happen, like Jacques befriending an urbane fop like Michel, because the plot needs it to happen to get to the ending it wants.

What it is, though, beyond being melodramatic and plagued with some problems in terms of believability, is entertaining. This is what pre-Code films should be. Sure, there are still a lot of conventions that it conforms to and the ending, while it gets there in an interesting way, isn’t much of a surprise, it’s fun to see unfold. This one is worth tracking down. If you like these early films, Condemned is one that you’ll likely find more entertaining than a lot of them.

Why to watch Condemned: With pre-Code films, the end is always a little in doubt.
Why not to watch: Like a lot of early talkies, at least some of it is overacted.