Film: As Good as It Gets
Format: DVD from Sycamore Public Library on laptop. 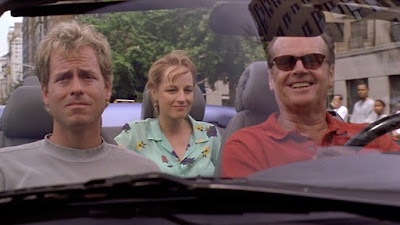 I think everyone has an actor or two that rubs him or her the wrong way. For me, one of those is Helen Hunt. I don’t specifically dislike Helen Hunt; I just don’t understand the appeal of her. I’ve never been excited about a Helen Hunt role or watched a movie specifically for her. That might be why it’s taken me this long to get to As Good as It Gets, the film for which she won an Oscar. Whenever I see Helen Hunt, I wonder why they didn’t get someone else for the role.

As Good as It Gets is kind of an angry romance, or at least a romance involving a very angry man. Melvin Udall (Jack Nicholson) is a successful novelist but a very unsuccessful person. Melvin is a misogynist and a racist and is buried in many ways by his phobias and compulsive behaviors. The film is going to attempt to make use hate Melvin initially and then have us come to love him by the end of the film. It’ a role that Nicholson does well. He plays a good creep and he gets a lot of benefit of the doubt because of who he is.

Melvin is such a creature of habit that he eats the same breakfast in the same restaurant at the same table ever morning. His waitress Carol (Hunt) is the only person on the staff who will serve him because Melvin is a genuinely terrible person, openly insulting people to their faces and making use of whatever ethnic slurs he think of while he is talking. Since he is also a germophobe, Melvin brings his own plastic silverware to the restaurant every day.

On day Melvin’s homosexual artist neighbor Simon (Greg Kinnear) is attacked when a young man who is modeling for him brings in a couple of friends to rob him. Simon is badly beaten and hospitalized, and due to an earlier run-in, Simon’s agent Frank (Cuba Gooding Jr.) demands that Melvin look after Simon’s dog while he is in the hospital. This initially goes poorly until Melvin discovers that he does have a tender side after all, specifically in connection with the dog. In fact, when Simon finally returns from the hospital, Melvin suffers something like a breakdown because he has to give the dog back.

Despite his mental hang ups (or indeed because of them) and his intense misanthropy, Melvin discovers that he has come to depend on Carol a great deal as well. When she doesn’t show up for work one day, he discovers where she lives and finds the reason for her absence, namely that her son Spencer (Jesse James) has severe asthma and no treatments seem to work. In a movie-style coincidence, his publisher’s husband is a well-regarded pediatrician (Harold Ramis), and to get Carol back to the restaurant, Melvin agrees to pay for any treatments necessary for Spencer.

As it happens, this comes at a high price. When Simon is told that he is broke because of his injuries and is forced to ask his estranged parents for assistance, Frank demands that Melvin drive him to Baltimore to ask for that help, and Melvin then demands that Carol go with them. And thus the second half of the movie can take place.

The biggest issue with As Good as It Gets, aside from the Helen Hunt-iness of the entire proceedings, is that it’s far too long for the story it tells. Sure, there are some complications and coincidences that need to be dealt with here, but the movie clocks in at well over two hours long. Critic Mark Kermode frequently compares movies to 2001: A Space Odyssey in terms of length. Kermode’s argument is that in that film, Kubrick takes us from the dawn of mankind to the dawn of a new species. In As Good as It Gets, we’re about 20 minutes shorter, and we go from a guy who is a misanthrope to a guy who is slightly less of a misanthrope by the time the final credits roll.

The cast is the real sell here, of course, and I genuinely have few complaints there, including Helen Hunt, despite my still not understanding the appeal of her in general. Nicholson is Nicholson, of course, and much like Bette Davis did bitch roles to perfection, Nicholson is often at his best playing complete bastards like Melvin Udall. It’s also a good reminder that Cuba Gooding Jr. was once a talent and that Greg Kinnear could act before he started taking Jesus-filled roles in films like Heaven is for Real and Salvation Boulevard. Toss in the wonderful Shirley Knight as Carol’s mom and the always charming Yeardley Smith as Frank’s assistant, and the cast pretty much speaks for itself.

On a recent episode of The Lair of the Unwanted podcast, the topic was our top-5 least favorite movies on the 1001 Movies list. Co-host Nolahn offered a small cheat with one of his picks—movies that seemed to be included on the list specifically because they had won a lot of Oscars. Based on that, it’s almost surprising that As Good as It Gets isn’t on the List. It was nominated for seven Oscars (including Kinnear in a supporting role) and won two (Nicholson and Hunt). I’m kind of puzzled as to why. It’s a fine film and a good story. But it’s not that great of a story, and it’s far too long for the story it has.

Why to watch As Good as It Gets: A good cast of characters and a story well told.
Why not to watch: It’s probably 20-30 minutes longer than it has to be.