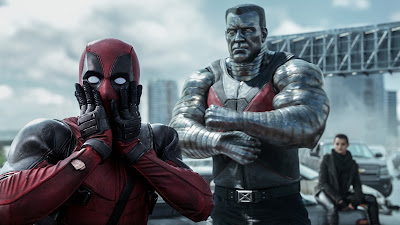 I realize that everyone who regularly reads this site almost certainly saw Deadpool when it was originally released earlier this year. Sometimes it takes me a few months to catch up. I don’t really enjoy going to the theater that much, and despite the fact that this is something I did want to see, I just didn’t get to it. I was actually surprised when I found it in the library. I tried to check out several movies and one of them was on reserve…and it wasn’t Deadpool. My wife loves Ryan Reynolds, so I figured she’d want to watch it, too.

Turns out I was both right and wrong about that. Less than 30 minutes in and Sue bailed on the movie, so I had to remove it from the Blu-ray player and finish it on the laptop. She wasn’t prepared (honestly, neither was I) for the level of violence. I can’t say it bothered me, but it did bother her quite a bit. Still, even knowing the basic story, I was expecting a lot more funny right off the bat and a lot less decapitation and brain splatter.

I’m not going to do much of a recap. I’d say there’s a much better than coin flip chance that you (yes, you) reading this have already seen Deadpool and probably enjoyed it. Instead, I’m going to discuss why I also enjoyed it, but probably not as much as you did. It’s entirely possible that it suffered from being overhyped for me. That’s certainly a possibility with a movie that got this much press and broke records for opening weekends. I didn’t enjoy it nearly as much as I hoped I was going to, though, mostly because I’m not sure it’s as clever as it thinks it is.

The big sell, aside from it being R-rated, is that Deadpool (Ryan Reynolds) knows he’s in a movie and thus breaks the fourth wall frequently. He refers to the audience and refers to the fact that he’s being played by Ryan Reynolds. It’s a gimmick, and while it’s entertaining, I don’t think it’s nearly as entertaining as we’re supposed to think it is. Some of them almost feel like they were put in because they were expected.

It’s also not nearly as funny as it thinks it is. Oh, don’t get me wrong; there are some laughs here, but not as many as I expected, and very few of them are really laugh-out-loud funny. A lot of the comedy moments are laboring under the misapprehension that it’s always funny to be crude. I love crude humor, but there were a number of places where it simply felt out of place in Deadpool, like the masturbation jokes were being made to be “shocking” and get laughs because we just don’t expect Ryan Reynolds to admit to jerking off. I get it. Once, it’s kind of funny. Multiple times, it loses its magic.

And so I find myself in a very odd place here. Deadpool is a film that has been positively reviewed, and it’s a film that I would recommend despite how much I’ve bitched about it so far. But it’s also a fanboy film. I work with a comic geek, and Deadpool reminded me of a conversation I had with him when Watchmen came out. I told him that since he’s such a high-level comic nerd, that there were really only two possible opinions for him to have on Watchmen. Either it would be the greatest movie ever made or the biggest travesty in movie history. There couldn’t be any middle ground for him. Deadpool seems to be that way—either a fanboy’s wettest dream or biggest disappointment. And here I am stuck in the middle, having enjoyed it but still being disappointed with it.

A lot of things simply aren’t developed enough. Morena Baccarin, who plays Deadpool/Wade Wilson’s love interest Vanessa, is given almost nothing to do. We know nothing about her and she spends only slightly more time on screen than Dopinder (Karan Soni), Deadpool’s taxi driver. I didn’t expect a full-on romance, but I expected to know something about the character, and all I end up knowing is that she’s got a thing for our boy Wade. Bad guy Francis/Ajax (Ed Skrein) is similarly without much backstory, while his sidekick Angel Dust (Gina Carano) is never even fully named in the film.

Would I have liked this more if I had seen it in the theater? Possibly. I can’t dispute the idea that some of my disappointment in Deadpool almost certainly comes from the fact that a lot of people seem to think of this as the second coming of super hero movies and R-rated action films. Ultimately, it feels like all hype, though, like it’s forcing things a little too much.

The biggest criticism? The trailers were more interesting and funnier.

So, yes, I’ve spent about 900 words complaining that Deadpool wasn’t the movie I was led to believe it was and wasn’t as good as I wanted it to be. It’s fine. It’s a serviceable super hero film and it has some entertaining moments. There’s a lot of violence and some sex. There are some good jokes. But it’s light on everything that really makes a movie worth watching and a story worth caring about.

Why to watch Deadpool: This is the R-rated super hero movie everyone wanted.
Why not to watch: It’s not as funny as it thinks it is.