Picks from Chip: Another Earth

Film: Another Earth
Format: DVD from NetFlix on rockin’ flatscreen.

This is the twelfth in a series of twelve films selected by Chip Lary. 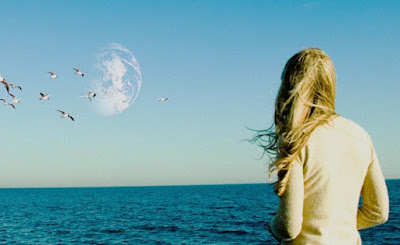 In fact, aside from The Man from Earth (one of Chip’s selections for me last year), this might be the least science fiction-y science fiction film I’ve ever seen. The departure from the real world is literally in the background for a great deal of the movie, and while it more or less starts the story and drives an undercurrent of the plot, this is a film that could just about be told with no changes if the science fiction elements were removed completely.

Rhoda Williams (Brit Marling), at 17, has just been accepted to MIT, where she plans to study astronomy. Drunk and leaving a party, she hears on the radio that a new planet has been discovered in close proximity to the Earth, as in within the solar system. She looks out the window to see if she can spot it, and plows into a parked vehicle. The accident puts John Burroughs (William Mapother) into a coma and kills his pregnant wife and young child. Four years later, Rhoda has finished serving her juvenile sentence and, not wanting any real social contact, takes a job as a janitor at the local high school.

The other planet has moved closer in those four years, and it’s now evident that it is a mirror Earth, with the same continents and cities. Rhoda also learns that John has come out of his coma. She decides to make what amends she can, but instead loses her nerve when he answers the door. She discovers that John has given up his position as a professor at Yale and instead lives a completely sheltered life on his own. Rhoda tells him that she is there to offer him a free trial of a cleaning service, and is soon cleaning his house once a week.

Naturally, because this seems to be the only way that this story can develop, romance blooms between John and Rhoda. However, still feeling a great deal of guilt over what she did in the past, Rhoda wants to make a change. She enters a contest sponsored by an entrepreneur to be a civilian on a space flight to the alternate Earth. Her essay seems to strike a chord with the man sending off civilians to the other planet and she wins a berth for herself. But what now? And what does she tell John?

The most interesting piece of the film visually is the approaching alternate Earth that seems to always be hovering in the sky, slowly moving closer and gaining in detail while the plot plays out below it. This is one of the better aspects of the film, in truth. That Earth hangs in the sky and casts a long shadow over everything that happens below it, and it does this without a great deal being made of it by the characters. Certainly, it causes a great deal of what ends up happening, but it’s almost never pointed at, stared at, or even much referred to. It’s simply there, watching.

I think the thing I really object to is the romance. It doesn’t seem to fit either the story or the characters. Let’s ignore for a moment the age difference—there’s a 17 year difference between William Mapother and Brit Marling—and look at simply how little it is actually needed. We don’t need these characters to be romantically interested in each other, and it greatly cheapens any sympathy I might have for Rhoda as a character. If this were more unrequited, or simply not consummated because of her guilt, I’d find it a lot more palatable. As it is, it just comes off as there to act as motivation for Rhoda. It seems plot-necessary rather than character-driven, and that’s an issue.

Another Earth also suffers from director Mike Cahill evidently having gone to the Joss Whedon school of snap zooms. There are snap zooms everywhere, and many of them are completely unnecessary and jarring and seem to have been added for “artistic” reasons. There’s a lot here that seems to exist simply for the “Look! I’m making an indie!” factor and would be better left in the hands of a more experienced director. I can forgive Cahill; this was his first non-documentary feature, so this sort of freshman mistake is understandable, but still annoying.

There’s a lot to unpack here and a lot of good ideas. Some of these ideas get lost in the production, but there’s a great deal here that’s worth seeing. I’ll call this a win, but this is the sort of film that could have done better with a steadier hand at the helm.

Why to watch Another Earth: Like the best science fiction, the focus is on the characters, not the science fiction.
Why not to watch: The central idea gets bogged down in some unnecessary baggage.