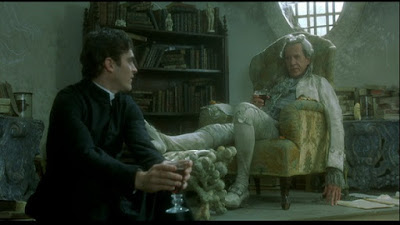 I’ve had Quills sitting on my desk for more than two weeks. I’ve been telling myself that I need to get to it for a number of reasons and I just haven’t been able to pull the trigger on it. This is a film based loosely (very loosely, apparently) on the life of the Marquis de Sade, whose writings inspired Salo, which remains one of the most unpleasant movie experiences I’ve ever had. I think, based on that, I can be forgiven for some reticence.

The bulk of film takes place in Charenton, an insane asylum in which the Marquis de Sade (Geoffrey Rush) has been imprisoned. Despite his imprisonment, de Sade has a spacious cell with a number of amenities. He continues to write a series of depraved stories dealing with sex and torture, smuggling them out by concealing them in his bed linens. The laundress Madeleine (Kate Winslet) takes them from his linens to the gate, where they are passed on to an agent who has them published. Naturally, the salacious nature of the Marquis’s prose has a number of effects on the populace. The people can’t get enough, but the powers that be want him stopped. Specifically, Napoleon wants his writings burned and the man silenced. To that end, he appoints Dr. Royer-Collard (Michael Caine) to oversee Charenton.

In reality, Royer-Collard arrives with an ultimatum for the tender-hearted Abbe du Coulmier (Joaquin Phoenix) who runs the asylum: prevent de Sade from publishing or Charenton will be shut down completely. Despite this threat, Coulmier will have nothing to do with the aggressive and barbaric treatments suggested by Royer-Collard and instead speaks to de Sade, requesting that he cease publishing. In the meantime, Royer-Collard travels to a convent to procure his promised bride, a very young orphan named Simone (Amelia Warner). The hasty marriage and the difference in ages causes a great deal of gossip around the asylum.

Part of de Sade’s “therapy” consists of writing and directing plays that are put on by the other inmates. Based on the gossip concerning the new arrival, de Sade’s new play goes after the new overseer of Charenton, essentially accusing him of being a sex maniac and abusing his young wife. This causes a number of curtailments of de Sade’s arrangements, leading him to more and more creative ways to continue to disseminate his writings.

Of course, a great deal of Quills revolves around sex and the incredibly disturbing and perverted prose of de Sade. Virtually all that we are privy to involve scenes of torture and degradation, things straight out of modern horror movies. These tales have a particular effect on de Sade’s fellow inmates and on those who work there as well. Madeleine is almost disturbingly taken with de Sade’s tales of sexual obscenity, while Simone Royer-Collard finds de Sade’s writings lead to her own sexual awakenings, particularly as they involve Prouix (Stephen Moyer), the architect sent by Napoleon to oversee the renovation of Royer-Collard’s new estate.

I’m of two minds on the story that Quills tells. On the one hand, the tales we get from de Sade are horrible, the equivalent of 19th century torture porn. And yet, while his tales are very much about this sort of abominable hedonism, the main story here is not just about this sort of libertine sex, but about censorship and freedom. In that respect, de Sade is almost admirable, particularly with the extremes he goes to to continue to write despite everything being taken away from him. There is a sense of defiance here that is almost—almost, mind you—inspiring, of a man who is willing to sacrifice everything for his muse aside from that muse itself.

So let’s talk performances, since that’s what brought this across my desk in the first place. It’s difficult to fault Geoffrey Rush for playing de Sade in a surprisingly nuanced manner. He’s depicted in many ways as larger than life, as someone who is playing a role, but who also to some extent believes the role that he is playing. Rush walks a careful line here between outright madness and a sort of controlled madness that is there for show. Beyond Rush, the rest of the cast is good, Winslet especially, but all of them pale to what Rush puts on the screen.

I don’t think I can say that I enjoyed Quills. It’s an upsetting movie in a lot of ways. Oddly, the film that it reminds me of a great deal is The People vs. Larry Flynt, in that the central character is reprehensible in so many ways, but is also fighting a battle that is still worth fighting. Flynt comments in that movie that if the First Amendment protects him, it will protect anyone, and pushing those limits was an important thing to do. The Marquis de Sade pushed those limits just as much, and didn’t have the protection of law shielding him in any way. There’s something worth admiring there, even if the story we get and the man that story is about are particularly awful.

Why to watch Quills: It’s subversive.
Why not to watch: It’s also pretty nasty.