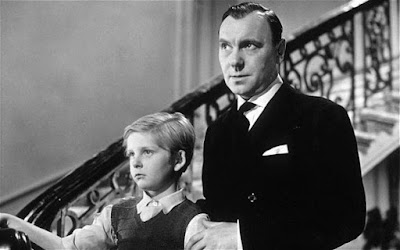 I’m almost certain that I’ve mentioned before that I consider myself a fan of author Graham Greene. Greene’s tight and intelligent screenplay is one of the things that makes The Third Man such an intense watch. A few years previous, the pair collaborated on The Fallen Idol a film that hits on a lot of the same themes and ideas that pervade the work of Greene in general. There is crime (kind of), misunderstanding, marital strife, infidelity, and high-ranking officials in ambassador-like positions. It’s got all the makings of a classic Greene tale, and with a director who knows how to do intrigue as well as anyone.

What makes The Fallen Idol particularly interesting is that a great deal of it comes from the perspective of an eight-year-old child, who happens to be the son of the ambassador in question. Young Phillippe (Bobby Henrey) is the son of the (evidently) French ambassador to England. Phillippe’s best friend is the butler, Baines (Ralph Richardson), who frequently spins wild tales to keep the boy entertained. The other relevant person in Phillippe’s life is Baines’s wife (Sonia Dresdel) who, if she were nicer, might qualify as shrewish. She seems to hate everything, most especially Phillippe and her husband.

Phillippe’s parents don’t actually play much of a role here. As the film starts, his father leaves to go retrieve his wife from the hospital, where she has evidently been for a long time, leaving Phillippe in the care of Baines and the rest of his staff. Phillippe spends his time avoiding the wrath of Mrs. Baines (who, like her husband is never given a first name), playing with MacGregor, his garter snake that he keeps behind a loose rock in an outside wall, and trying to get the attention of Baines, whom he idolizes. In fact, Phillippe follows Baines out into London when Baines leaves the house.

What he discovers is something he doesn’t really understand but that the audience picks up on immediately. Baines is having a tryst with Julie (Michele Morgan), a former worker at the embassy. Phillippe innocently intrudes, and to keep everything from his wife, Baines tells the boy that Julie is his niece. Phillippe just as innocently mentions Julie to Mrs. Baines that night, setting up the middle of the film. Mrs. Baines leaves for the day, Baines and Julie take Phillippe to the zoo, and then Mrs. Baines returns to bring down her wrath upon everyone she can find.

And here’s where things get really interesting. Phillippe sees Baines and his wife struggling at the top of a grand staircase. Soon after this, Mrs. Baines is dead at the bottom of the same staircase. Scared, he wanders off until he is picked up by the police, who get him home and discover everything that has happened. Importantly, what Phillippe misses is that Mrs. Baines wasn’t pushed down the stairs by her husband. Instead, she moved out onto a balcony to get a view of him and Julie and slipped to her death. But Phillippe thinks that his friend is now a murderer, and like many an eight-year-old is trying to figure out a convincing lie to protect his friend, and naturally succeeds only in making Baines appear guilty of a crime he genuinely didn’t commit.

It’s a great story, a seriously great one. It’s got all of the elements of a fantastic thriller, and it’s directed within an inch of its life. I tend to like a lot of Carol Reed’s movies (Oliver! is a notable exception), but the story of this one shows just how much work Reed was willing to put into getting the movie he wanted. Evidently, young Bobby Henrey was easily distracted, which meant that Reed had to find ways to keep him entertained and arrange shots so that they could be edited together in a way that ultimately made sense. It all works perfectly, and for a kid who evidently had the attention span of a caffeine-addled weasel, Bobby Henrey turned in one of the great child performances of the decade.

With a single caveat, that is. For the 20 minutes or so of the film, about 60% of his dialogue is a high-pitched and over-excited “Baines! Baines!” It calms down eventually, but it does approach nails-on-chalkboard annoyance levels for the first act of the film. This is balanced by the masterful work of Ralph Richardson, who never seemed to give a bad performance in front of the camera. It is Richardson who carries the film, creating a nearly perfect blend of wanting to protect the child, his own reputation, and to still maintain his actual innocence.

The Fallen Idol perhaps pales in comparison to the more sweeping and grand story of The Third Man, but it’s a great movie in its own right, and one that is unjustifiably forgotten.