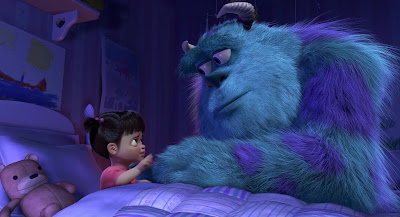 In terms of the movies themselves, I like a lot of the nominees, whether I’m impressed with the screenplay and story or not. But, as is always the case, there’s room for improvement here and a few that could happily go away. It was a good year for animated films. Monsters, Inc. is a smart movie and a damn fine story and there’s precedent for animated film nominations here (and before you object, Shrek was adapted). Spirited Away is another story worth talking about…but it got its nominations (and an Oscar win) the following year. On the non-animated front, I thought The Son’s Room was depressing, but beautifully written. I also really like how complex Monsoon Wedding, which looks like a nothing on the surface, turned out to be. And speaking of complex, where’s Mulholland Drive?

5. The fact that Gosford Park won not only over the other four nominees but over the ones I mentioned above makes me angry. I thought and still think this movie is a boring mess. The only justification I can think of for its winning is that there are a lot of characters and it all more or less holds together. That doesn’t stop it from being astonishingly dull. I didn’t hate this movie, but I didn’t like it, either. A bunch of posh Brits doesn’t make it good, interesting, fancy, or worth rewarding. I don’t even like the nomination.

4. Monster’s Ball is a decent movie, but it very much feels like this is a film that got a lot of respect because of the story and the interracial nature of the relationships more than anything else. It’s a film where I like the concept a hell of a lot more than I like the actual movie that was produced from it. There are better choices than this one, both in terms of winning the actual award and even in terms of actual nominations. I don’t think it should be here; I’d keep if it if I only got to replace one, but I’d drop it if I got to replace two.

3. Of the five nominated films, Amelie is by far my favorite. So why is it in third place? Because it’s not so much the screenplay that makes it great. It’s everything else that makes it great. It’s the wonderful characterizations and the way the film is presented. The story is a good one, but let’s be honest, this would likely be just as charming and special because of Jeunet’s direction and Audrey Tautou, you could do a lot of things and still end up with something very much worth watching. I love the screenplay and wouldn’t complain had it won, but I think there are better screenplays this year, if not movies.

2. The same could possibly be said of The Royal Tenenbaums. It’s a movie that wouldn’t work as well as it does with a lesser screenplay, though. This is a film that trades in large part on all of the twists and turns and relationships that are created in the screenplay to work at all. Of all of Wes Anderson’s films, this is the only one that I feel like I could watch at any time and be happy to be watching it. He’s someone I can’t take a steady diet of, except for this movie, which is almost good enough to be the best of its year.

1. Memento takes the win. This is all screenplay, and it’s staggering that the damn thing works. Half the movie works backwards and is still somehow coherent. Half the movie goes forward and still manages to fit in with the rest of the movie. Memento isn’t merely a smart screenplay, though. This is a movie that changed the way that people watch films and change the way film can be seen. That’s something that should be rewarded. Memento got robbed despite being the best in a pretty strong field.