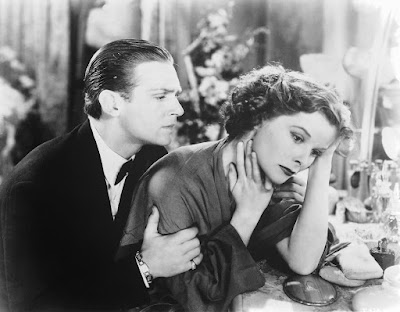 It’s undoubtable that Katherine Hepburn was one of the greatest actresses in film history. I find myself in the odd position of liking the latter part of her career much more than the earlier part. There’s something manic about her early performances that rubs me the wrong way. In Morning Glory, Hepburn is on screen for about 65 of the film’s 74 minute running time. I think she’s talking about 60 of those minutes. I understand that a great many people find this performance charming; she did win her first Oscar for this role, after all. But I have to say that for probably 56 minutes of the 60 she’s talking, I wanted her to shut the hell up. I’m evidently in the minority on this.

It may also simply be the plot that annoys me here. Morning Glory is the story of a young actress who calls herself Eva Lovelace (Hepburn) from a small town in Vermont where she has achieved some measure of success on the amateur stage. She arrives in New York determined to make it on Broadway, evidently by talking non-stop to everyone she comes in contact with. She’s decided that the best way to break into the business is to show up at the office of Louis Easton (Adolphe Menjou), a major Broadway producer.

It’s here that she meets a trio of people that will be important for the rest of the short film beyond Easton. The first is a current star of Broadway Rita Vernon (Mary Duncan), who is the sort of haughty prima donna that we expect in a movie like this. The second is long-time Broadway actor R.H. Hedges (C. Aubrey Smith), who is more or less forced to agree to give Eva acting lessons for the promise of payment later. The third is playwright Joseph Sheridan (Douglas Fairbanks Jr.).

Rather than muddle up the film with things that can be handled easily in exposition, we gloss over a few months and learn some important history. Eva had been given a small part in a play by Easton and Sheridan and bombed in it. Hedges discovers this when he spies his former pupil in a diner spending what looks like the last of her money on a cup of coffee. He decides to take her to a party being thrown by Easton to celebrate the success of his latest play. Eva, half-starved but still putting on airs, refuses to eat and gets drunk on a single glass of champagne. She makes a fool of herself and eventually passes out.

And here’s where things get a little interesting, thanks to this being pre-Code Hollywood. The next morning, Easton asks Sheridan to deliver a message to a girl he’s spent the night with, more or less hoping to buy her off. It turns out that the girl in question is Eva Lovelace and Easton is dreadfully mortified that he’s slept with her. He wants nothing to do with her now, feeling guilty at having taken advantage of her, but she’s under the impression that he’ll call her soon enough and that maybe she’ll get another break on the stage.

She will, of course, and it will come thanks to Rita Vernon. But that takes us well into the short third act of the film as well as into spoiler territory, so I’m going to stop here.

The biggest problem I have with the film is Hepburn herself, or at least the role. I’ve no doubt that she handles the role well for what it is, but I find Eva Lovelace to be a purely unlikable character, someone for whom I find little but irritation through the first 50 minutes of the film. This is a character type where I have trouble understand the appeal that so many people seem to see. Eva is so wrapped up in the idea of being a great artist that she is unable to see that things like eating on a regular basis are important. I’ve known people like this. I’m not a fan.

And yet, Morning Glory does something that surprised me at the end. It goes dark, really dark. It actually ends up saving the movie in some respect. It probably will never make it to being a movie that I want to watch again any time soon, but it went from being something terribly annoying and frustrating into something.

It’s worth mentioning the title. A morning glory is a flower that blooms early in the morning and withers away before noon. It’s an indication that perhaps Eva’s success may be fleeting. That’s a surprise in a film of this vintage, and it’s the one thing that makes the annoyance of the first two acts worth it. It’s not a good thing that for close to an hour Hepburn’s performance put me in mind of her work in Alice Adams.

Why to watch Morning Glory: This is the film that made Katherine Hepburn a star.
Why not to watch: It’s brutally short.