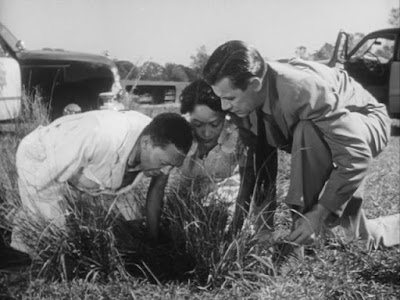 In 1949, a little girl named Kathy Fiscus fell down the narrow shaft of an abandoned well. The story became a national sensation and a national tragedy when she was pulled up dead from the shaft. Woody Allen made reference to this in the end of Radio Days and there’s a pretty solid connection with Ace in the Hole as well. But the clearest connection to the story is 1951’s The Well. The benefit for the viewers is that The Well only focuses a part of its time on the little girl who is trapped. The rest of the time is spent dealing with spiraling racial tensions in the town where the event occurs.

It’s also worth noting that The Well has the most misleading art I’ve ever seen for a movie. Take a moment and check out the IMDB page for this film. You’ll see a shirtless man clutching a woman who looks terrified. These events aren’t a part of this film, not even a little. You would expect, seeing that, a film about a dangerous femme fatale and a heist of gold bullion, not a film where a little girl falls into a well and a town explodes into racial violence.

The film starts with us seeing the disappearance of the little girl in question. Five-year-old Carolyn Crawford (Gwendolyn Laster) is picking flowers as she walks to school when she suddenly vanishes, having stepped into an abandoned well shaft. Her parents, Martha (Maidie Norman) and Ralph (Ernest Anderson) are naturally concerned, but Carolyn has wandered off before. Local sheriff Ben Kellogg (Richard Rober) tells the parents that he’ll do what he can to find the girl. It’s worth noting at this point that Kellogg is white and the Crawfords are black. This is going to be important.

The police start to track down the girl’s behavior that morning, discovering that she had a love of flowers and sometimes wandered off in search of them. She also stopped every morning on her way to school to look into the window of the local florist and admire his flowers. This day, though, we learn that there was a white man who seemed to be paying attention to Carolyn and even bought her some flowers. That man, Claude Packard (Harry Morgan), is a visitor in the town and the nephew of Sam Packard (Barry Kelley), a local bigwig. Claude is eventually tracked down and brought into custody and questioned. His claim—one that we as the audience can verify because we saw the girl disappear—is that he did buy the girl some flowers and help her cross a busy street but has not seen her since.

And this is where things get interesting. Sam Packard wants the story hushed up and his nephew moved out of town to keep his name clean. He’s not really concerned if Claude did anything or not, which deeply offends Claude. The local black population is concerned that a white man will be let off for committing what they have decided is the abduction and murder of a young black girl. When Sam Packard has a minor heart attack while talking to the Crawford family, this suddenly becomes a race-based attack on Packard, putting all of the white residents up in arms. Racial tensions spin out of control, and in a bit of interesting honesty, the local police seem more interested in arresting the black residents. In one instance, a young black man is arrested for evidently getting beaten up by a gang of white youths.

Through all of this, Sheriff Kellogg attempts to remain as color-blind as possible, but eventually relents to calling in the National Guard to keep the peace in a town that is about to explode. And then a young boy discovers Carolyn’s things next to the well shaft, and suddenly the second half of the film becomes a rescue attempt, one that will require the cooperation of the entire town including Sam Packard and trained miner Claude Packard.

The Well gets a few things wrong and a lot of things right. The biggest miss is the acting of a number of the people. I would guess that a lot of the people weren’t professional actors and that shows in many cases. Harry Morgan is clearly the class of this cast, but even there he’s not on screen a ton. Then again, no one is on screen that much. The other issue is that the racial tensions effectively stop dead and we shift into the rescue with close to half of the movie left. It works, but it does feel strange, as if this is really two movies—one about the racial tensions and one about the rescue. In reality, we get two very quick acts and a third act that covers the second half of the film.

What The Well gets right is pretty much everything else. In many ways, The Well feels ahead of its time in the way it approaches race relations. The town the film takes place in is clearly racially mixed and, per the comments of many of the people, has never experienced any racial problems. When the race problems start, the town becomes quickly divided along those lines. These tensions begin and grow in a perfectly believable manner. The florist talks to the police about the man who bought Carolyn some flowers. This immediately becomes a story that the man abducted the girl and is spread by the florist’s black delivery person. Packard’s heart attack becomes an assault almost immediately, and that view of what happened becomes gospel in the white community in a flash. The psychology is very real and terrifying.

The rescue sequence is perhaps a bit too long. But it’s also pretty interesting to see all of these tensions melted away as everyone comes together for a common goal. I have to say, it’s impressive that a film can simultaneously be this invested in the idea of racial politics and just as firmly be completely color blind.

I’m glad I got to see this. It’s worth tracking down.

Why to watch The Well: A story about much more than it seems to be on the surface.
Why not to watch: Some of the acting is pretty amateurish.

Posted by SJHoneywell at 2:41 PM