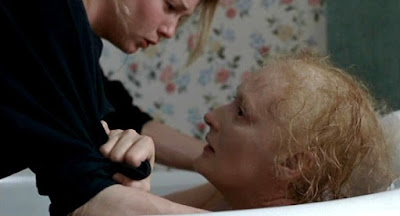 I don’t always closely monitor my NetFlix queue, which is why movies like One True Thing show up unexpectedly. I’m not the world’s biggest fan of Renee Zellweger. In fact, I’ve pretty studiously avoided her films for the last six years, knowing that I’d have to get there eventually. Make no mistake here—Meryl Streep was nominated for her role in this, so she’s the reason I watched, but this is Zellweger’s film. I didn’t even know she was in it. When I discovered that a few moments in, I braced myself for what was to come.

This is one of those stories where the characters are desperately successful and desperately broken at the same time. Ellen Gulden, a Harvard graduate (yes, this is mentioned frequently), is working as a writer for a New York magazine. Her father George (William Hurt), is a former literary great, the winner of a National Book Award, and heading his department at the college where he teaches and claims to be working on another novel. Ellen’s brother Brian (Tom Everett Scott) is currently at Harvard and struggling with, amusingly enough, English literature. And then there’s Kate (Meryl Streep), the mother.

Ellen and her friend Jules (Lauren Graham) have come back to the town Ellen grew up in for her father’s birthday party. It is here that we learn that Kate Gulden is something of a Stepford Wife. She keeps the perfect home, frequently redecorating. She cooks elaborate meals effortlessly and flawlessly. Her husband’s surprise birthday party is themed—come as your favorite literary character. She is also a member of a local women’s group called the “Minnies” who do a variety of charity events all year and essentially busybody their way into people’s lives.

What we also learn is that the day following the birthday party is a day where Kate goes to the doctor. The appointment does not go well—she’s admitted to the hospital for surgery because she has cancer and will soon start a series of chemo and radiation. Everyone is struck by the news, of course, but George Gulden evidently wants his life to continue unabated. He more or less demands that Ellen quit her job and return home to play nursemaid, working freelance when she gets the time to do so. Not wishing to disappoint the father whom she idolizes, she does, and immediately regrets the decision, since she has never felt close to her perfect homemaker mother at all.

Ah, but this is a journey of discovery, and there will be a great deal to discover here. First is that George Gulden, for all his talk, is something of a fraud. He hasn’t been able to write much of anything since his brief fling with fame. Second, he has had a series of affairs with his students and assistants, something of which Ellen knew nothing at all. Ellen tries desperately to either cling to her mother or deal with her father and finds instead that she is slowly filling with rage. She’s becoming a housewife, more or less, the one thing she never wanted. She’s doing this because her mother is ill and because her father is evidently too selfish to allow anything in his life to ever change, even if that means forcing his daughter to destroy her career.

Like I said, the film is filled with fabulously successful and talented people who are also completely broken individuals. Kate’s condition worsens and worsens, and George continues to avoid taking any responsibility for helping his wife, staying out of the house most of the day and night and pushing all of the work on his daughter. And, of course, being the perfect housewife, Kate Gulden sees everything that is happening and soldiers on, attempting to repair her family before her time runs out.

Here’s the thing--One True Thing could be sappy and maudlin, and there are places where it is. I could easily object to these people who are overburdened with talent and money and are still a bunch of whiney bitches. But it does have some really solid moments, pretty much all of them coming from the two female leads. The first half of the movie is entirely Zellweger’s, and she’s quite good, even in the misplaced comedy moments. Streep gets her moments in the second half, and this is where she earned her nomination. The truth, though, is that Kate Gulden is staggeringly annoying in the first half of the film and is really only interesting when it is clear that her time is short. Zellweger, and I can barely believe it as I’m typing the words, should’ve been the one to get the nomination here. There’s an attempt to give both Hurt and Scott are given attempted moments, but neither reach the level of Streep and Zellweger.

There are moments of attempted comedy here that fall completely flat. When Kate has to host a lunch for her women’s group, Ellen volunteers to make it. And of course, it’s a “comic disaster.” Oh, she lights a fire in the kitchen. Oh, she apparently burns everything. See, she’s so unlike her mother that it’s supposed to be funny that she can’t pan fry a chicken breast. Then, later in the film, she manages to turn out a complete, perfect Thanksgiving dinner. Because of course she does—she’s becoming her mother, after all.

It’s things like that that pull the film down. Without the evident need to pound in this message that could have come about more naturally, the entire movie would be much more natural and thus more powerful. It feels affected, and all of the good it does is a bit tainted because of that.

Still, I didn’t hate it. And I seem to have lost some fear of Renee Zellweger.