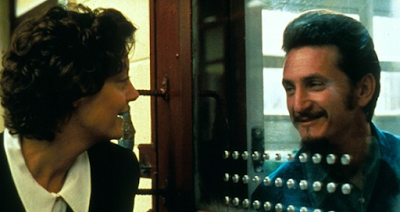 Dead Man Walking is based on the book of the same name by Sister Helen Prejean (played by Susan Sarandon). Sister Helen works with the poor, and is told that she has received a letter from a man named Matthew Poncelet (Sean Penn) who has been on death row for six years. Poncelet claims that while he was a part of the crime that put him on death row—the rape and murder of two young people—he didn’t actually kill anyone. He’s out of his legal chances now and needs someone else to attempt to push for additional appeals. Sister Helen is his choice, and as a nun, she feels compelled to help him in any way she can.

This involves finding him a lawyer named Hilton Barber (Robert Prosky) who is willing to work pro bono on the case. It means filing appeals and attempting to get whatever clemency she can for him before the execution, which, after six years, is becoming imminent. It means arranging a lie detector test for him to attempt to prove that he didn’t actually kill anyone. It also means being put in direct contact with the families of the victims of the crime.

This is Sister Helen’s first capital case, and she doesn’t fully understand the ramifications of what she has stepped into. The parents of the murdered teens want justice for their children, naturally, and can’t fathom why Sister Helen is having anything to do with Matthew Poncelet. They see this as siding with him or somehow siding against their children. The father of the murdered Walter Delacroix, Earl (Raymond J. Barry) tries to understand her motivations more, while the parents of the murdered Hope Percy, Clyde (R. Lee Ermey) and Mary Beth (Celia Weston) become enraged when they learn that she is acting as Matthew’s spiritual advisor before his execution.

What is fascinating here is no watching a man prepare himself for his execution or even the vast amount of spiritual mummery that happens here, and there’s a lot of that. Sister Helen is told multiple times by the prison chaplain (Scott Wilson) that her job is not to minister to Poncelet or even really console him, but to get him to a point where he will take the sacraments and thus have his soul saved. He’s not important—the mission to save his soul is all that matters. No, the really interesting thing is how hard Dead Man Walking works to make Matthew Poncelet even a little sympathetic while simultaneously making him one of the least sympathetic characters in film history. Poncelet is openly racist, has swastikas tattooed on his arm, and says in interviews that he wished he’d been a terrorist blowing up government buildings instead of an accused murderer. And yet there is still some small measure of sympathy afforded him by the end of the film.

Aside from the story and the tremendous work done with the characters, it’s also beautifully directed. Some of the performances come from that direction, of course (we’ll get to those in a moment), but how the story is told comes from the direction as well, and this is a film that is masterful with its use of camera. Frequently, our two main characters have a window between them, and shots are presented in such a way that we see on character on screen and the other reflected in that window, giving us the semblance of a normal conversation in a very unusual circumstance. Much is done in close up, putting the focus on their faces, which is exactly where it should be. While the film does great work trying to make Matthew Poncelet sympathetic, it also intercuts his execution with scenes of the murder of Walter and Hope, never letting us forget exactly why he is being executed in the first place. It’s a smart decision, because it makes that sympathy much more interesting and conflicting.

This is almost certainly Susan Sarandon’s best work, and that comes from someone who generally likes Susan Sarandon. In many ways, Penn’s performance, since he has to be such a terrible person and still create such sympathy, is even better. The cast is filled with a lot of great people in these roles, though. I love Robert Prosky, who is an unsung character actor who generally deserved a lot more credit than he ever received. It’s also evidence that R. Lee Ermey can do more than simply be a drill and/or police sergeant. It’s worth noting that Jack Black shows up here in a minor role as one of Matthew’s brothers—Black worked with Robbins on Bob Roberts as well. It’s also Peter Sarsgaard’s first film credit as the murdered Walter Delacroix. There’s even a cup of coffee role for Clancy Brown as a state trooper.

What is really most impressive here is how well the religious angle is handled. There was going to be a great deal of religion here; there couldn’t not be, based on the situation and the characters. It’s handled well overall, though. It doesn’t hammer the religion home as much as might be expected, and frankly, I expected a lot. There’s a little bit of preaching, but much of that preaching is balanced by some of the darker elements of religion—the frequent quoting of “an eye for an eye” and the almost predatory desires of the prison chaplain.

If I have a complaint, it’s that this movie takes a damn long time to end. There’s a good 25 minutes left (admittedly including the substantial credits) when Matthew Poncelet is led out to his execution. I don’t want to say it goes on too long, but the denouement is a long time coming and the coda feels a bit unnecessary. Still and all, it’s a powerful film and one worth seeing.

Why to watch Dead Man Walking: Strong cast, stronger performances.
Why not to watch: It takes a long, long time to end.