This is the eleventh in a series of twelve movies selected by Chip Lary. 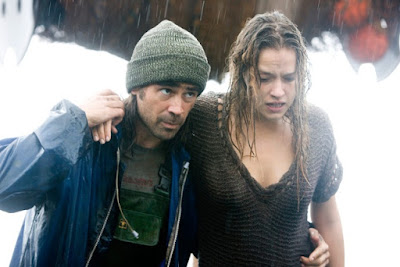 I try to go into movies as neutrally as possible. That said, there are times when you can’t help but have a preconceived notion. Ondine had two strikes against it before it even made it into the spinner. The first is that at the top of the box is Colin Farrell. I like Colin Farrell in In Bruges and that’s about it. He’s okay in Minority Report. Otherwise, I don’t have a lot of use for him. Second, the movie’s tagline is, “The truth is not what you know. It’s what you believe.” That’s the kind of bullshit that makes people think that the Earth is flat and only 6,000 years old. Screw that noise.

An Irish fisherman with the unlikely name of Syracuse (Farrell) is out on his boat one day. When he pulls up his net, he finds a young woman (Alicja Bachleda) inside. The woman claims to not remember her name or anything else and also says that she doesn’t want to be seen by anyone. Syracuse, nicknamed “Circus” from his drinking days, takes her to his late mother’s house, a place where she can live without anyone seeing her.

We also discover a few important facts about Syracuse. First, he’s divorced, or at least separated from his wife Maura (Dirvla Kirwan), who now lives with a Scot named Alex (Tony Curran). Second, he hasn’t had a drink in several years, something he confesses to the local priest (Stephen Rea) since there is no AA chapter in their small town. Third, Syracuse and Maura have a daughter named Annie (Alison Barry) who is currently in a wheelchair. Her issue is not her legs, but her kidneys. They are failing and she needs a donor. In lieu of that, she deals with dialysis. Syracuse sits with her and tells her stories. In this case, he tells her about a fisherman who pulled up a woman in his nets.

Annie is precocious but still a child. She figures out a few things on her own. First, she discovers that the story her father has told her is a real one. Second, because she is a child, she decides that the woman, who has named herself Ondine, is a selkie, or a sort of faerie who can turn herself into a seal. Annie becomes something of an expert on selkies and their lore. Meanwhile, Ondine goes fishing with Syracuse, who discovers that when Ondine sings, his lobster traps come up full; when she doesn’t, they come up empty. On another fishing trip, he catches salmon in his trawling net, which isn’t supposed to happen.

There’s also a mysterious man (Emil Hostina) lurking around the town. According to the selkie legend, he may well be Ondine’s selkie husband coming to claim her and take her back to the sea. Or there may be a darker and much more prosaic reason for his sudden presence in the town.

Ondine wants very much to put itself in the position of being a magical realism film, and for the most part, it succeeds in doing so. There is very much a sense of something like magic happening in the film, much of it coming from Annie’s believe in Ondine as a selkie. Ondine takes Annie swimming, and discovers something underwater, which Annie claims is her selkie coat. For her, believing in the legend means that Ondine has to bury the coat so that she will be able to stay on land for seven years, and perhaps find happiness with a “land man.” Yes, that’s certainly going to play into the film at some point.

A great deal happens here that comes from either selkie magic or from surprising coincidences, and which way that falls will depend on what you want to take from the film, hence the film’s tagline. There’s a bit of monkey’s paw-ishness about some of the things that happen, though, and the film does take a dark turn in the third act. It’s a dark turn that works in the main, but it’s a bit surprising for a film that to that point had been pretty light, even with a sick kid.

The real question is whether or not I liked it. I suppose I did, although I don’t think it’s a movie that will stay with me for a long time. It’s pleasant enough. I’d still rather see someone other than Colin Farrell on my screen in most cases, but Alicja Bachleda is quite good, and we can hope that young Alison Barry ends up having a career, because she’s clearly the best thing in the film.

I liked Ondine more than I thought I would. Given the two strikes against it that it had going in, that’s not saying a lot, but you could do a lot worse for a night’s viewing.

Why to watch Ondine: A nice spin on a fairy tale.
Why not to watch: Colin Farrell’s backpfeifengesicht.