Film: I Spit on Your Grave (1978)
Format: Starz Encore on rockin’ flatscreen. 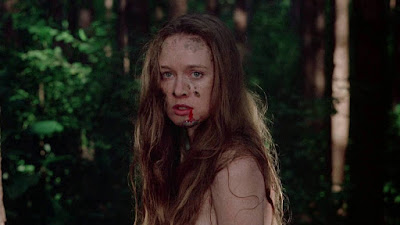 When I was a kid, I Spit on Your Grave (also known as Day of the Woman) was one of those movies you heard about because your older brother had seen it. Kind of like Faces of Death in that respect. That’s really what I knew about this going in. It was something my brother Tom had seen at some sort of midnight movie somewhere and talked about with his friends. I picked up what I knew about it through osmosis more than anything else.

So what did I know? I Spit on Your Grave is about a woman who is gang raped and, once she recovers, who takes bloody, nasty revenge on her rapists. And guess what? That’s pretty much the whole movie. The first half leads up to the rape and contains the disturbingly long rape sequence. The second half is the revenge of our heroine, who exacts it with an increasing brutality as the film winds to a sudden and abrupt conclusion. Let’s get this out of the way right now—there’s nothing good about I Spit on Your Grave. This is a reprehensible movie. I can see it being an easy one to defend—it’s entirely possible to see this as something like a movie about female empowerment. I can see that. I mean, I don’t think it’s true, but I think it’s entirely possible to view the film this way. I think it’s also possible to see this as more or less a female version of Deliverance. That’s actually closer to the truth. The problem is that it’s not very good at all.

But, sooner started sooner finished, right? Jennifer Hills (Camille Keaton) is a short story author who has decided to rent a house in the middle of nowhere for a summer so that she can write her first novel. She arrives, meets a couple of the locals, and starts working. She attracts the attention specifically of four men. The first is Johnny (Eron Tabor), who runs the local gas station. Numbers two and three are Stanley (Anthony Nichols) and Andy (Gunter Kleeman), both unemployed and both of whom spend their day hanging out at Johnny’s gas station. The fourth is Matthew (Richard Pace), the mildly mentally disabled grocery delivery boy who becomes immediately attracted to Jennifer because of her scanty clothing and because she is nice to him.

…And cue the rape sequence. The only positive thing I have to say about this is that it was slightly less unpleasant than the one in Irreversible. It’s a hell of a lot longer, though, and it comes in multiple parts. It’s not enough that Jennifer is raped by one of the men; she’s raped by all four of them eventually, and it takes 20-25 minutes all told. It’s nasty. Of course, it’s supposed to be nasty.

The entire second half of the film is Jennifer plotting and then exacting her revenge on the men in question. She does this one person at a time. This is also a case where the plot of the movie is controlled by the desired outcome of the movie. After the rape, the men send in Matthew to kill Jennifer so that she can’t accuse them of anything. He doesn’t do it (hence the second half of the movie). Two of the men are so blinded by their own penises (penii?) that they fully believe that Jennifer somehow enjoyed the rape and seems to have ignored the fact that they planned on killing her. That boggles the imagination.

In fact, the only positive thing I can say about I Spit on Your Grave is a piece of trivia I gleaned from the IMDB page. Essentially, all four of the men demanded that they all spend time on camera naked in a sort of solidarity with Camille Keaton, who spends a vast amount of time nude on camera. That’s pretty interesting.

But really, that’s it. I’m not happy that I’ve seen this and I won’t see it again. Not again.

Why to watch I Spit on Your Grave: You’ve got nothing better to do for 100 minutes.
Why not to watch: This is a reprehensible film.

Posted by SJHoneywell at 4:35 PM

Email ThisBlogThis!Share to TwitterShare to FacebookShare to Pinterest
Labels: Day of the Woman, horror, I Spit on Your Grave, Meir Zarchi, thriller