A Sort of Homecoming 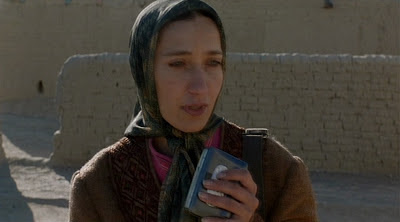 My wife and kids got me a Blu-Ray player for Father’s Day. Sadly, I don’t have any Blu-Rays to play on it yet because it’s too new. While I’m certain I will get some eventually, I figured it would be a good idea to press it into service once it was hooked up, and since it plays DVDs as well as Blu-Rays, the latest offering from NetFlix it is. That latest offering is Mohsen Makhmalbaf’s Safar e Ghandahar (Kandahar, also called The Sun Behind the Moon), the sort of film that tends to get a filmmaker like Makhmalbaf put on some sort of list for assassination. I could do worse for an inaugural disc.

It’s important that this film, released in 2001, chronicles life in Afghanistan before the current war there but after the takeover by the Taliban. While this is the story of a particular woman who has come to Afghanistan, it is also the story of what has happened in that country as a result of the brutal Taliban regime. If you haven’t been paying attention over the last decade and a half, that means theocracy, the oppression of women, and all of the evil this entails.

Nafas (Nelofer Pazira), an Afghani woman turned Canadian has come to Iran with the hope of getting to the Afghan city of Kandahar. She received a letter from a sister left behind when the family fled. This letter says that her sister, who has lost her legs to a land mine, plans to kill herself at the next eclipse, which will be the final one of the millennium. Naturally, Nafas wants to prevent this from happening. Despite the obvious risks to herself for traveling in Afghanistan under its Taliban leadership, she goes. We learn almost immediately that this is not a “she might get in trouble” kind of problem. Nafas’s life is constantly at risk; women are of no value in Taliban society, and the slightest breach of orthodoxy could well result in her death or something much, much worse.

The film is simply her journey across the desert to the city of Kandahar and the many perils and problems she encounters along the way. Again, I’m not trying to make light or make this sound like something less harrowing than it is. We are frequently reminded that an offense as minor as lifting the veil on her burqa equates to a loss of honor and will have dire consequences.

This is culture shock at its most extreme. For part of the film she is led by a young man named Khak (Sadou Teymouri) who was expelled from his madrassa for not being able to sing parts of the Qur’an. When she becomes ill from drinking polluted water, she visits a local doctor (Hassan Tantai, more on him later) who is forced to examine her through a hole in a sheet because of local custom preventing him from seeing the face of a woman to whom he is not married.

Correctly, there is no resolution here. The narrative finishes in medias res, which is appropriate. There is no real happy ending possible here, only a descent into theocracy and oppression. Everything in Safar e Ghandahar is touched by this; even the brightly colored clothing of the women scream of this same oppression, since this clothing is consistently the full-body burqa that shows skin only on the hands and feet. No bright yellows or blues or greens can shield us from the fact that this is an enforced dress code required for fundamentalist religious duty. There’s no beauty in this, no charm of a foreign culture. It is subjugation, cruelty, and tyranny, not to mention blatant misogyny.

A little more on the doctor, who proved to be controversial not in his character but in the actor who played him. He is credited as Hassan Tantai, but is actually named Dawud Salahuddin and was born David Theodore Belfield. He’s an American convert to Islam notable for performing a political assassination at the behest of the Iranian government in 1980, and is still a wanted fugitive in the United States. Makhmalbaf makes a compelling case that he is as much a victim as anyone else—his native humanity being suborned by religious dogma.

I am continually happy to find films like Safar e Ghandahar despite the horrors they show me. We see hordes of people missing limbs from encounters with landmines, people desperate for cobbled together replacement limbs from the Red Cross, waiting a year for something that looks like it was put together in a high school metal shop. It’s horrifying, but not because the people are missing limbs. It’s horrifying because it is real. It is a terrifying and sobering bit of reality that one man offers a pair of these limbs to Nafas because she is traveling through land known to contain mines, so she should really have a spare pair of legs just in case she needs them. It’s not that this comment is made that’s terrifying. It’s that it’s made to sound so sensible and commonplace.

And so I am thankful for films like Safar e Ghandahar, because it shows me what my world could be like save for accident of birth. I’m equally thankful that directors like Mohsen Makhmalbaf find such tales important, even at the risk of their own lives.

Why to watch Safar e Ghandahar: You owe it to the people of Afghanistan.
Why not to watch: It’s the definition of a “hard watch.”