Film: The Man Who Knew Too Much
Format: DVD from Rockford Public Library on laptop. 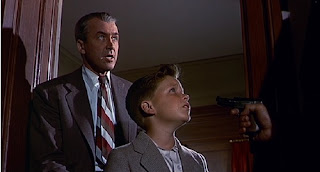 The more I watch Hitchcock, the more I like a lot of his work. At the same time, I also realize what a limited palette Hitchcock had. The Man Who Knew Too Much is a ridiculously entertaining film, but in many ways it’s no different from many other Hitchcock films. There are elements of The 39 Steps and North by Northwest and Rear Window packed into this film. What this one has that the others don’t is exotic locations. Hitchcock was all about ordinary people trapped in extraordinary circumstances, mistaken identities, and people in the wrong place at the wrong time.

Dr. Ben McKenna (James Stewart), his wife Josephine (Doris Day), and their son Hank (Christopher Olsen) are on an exciting trip. After a medical conference in Paris, they’ve seen Madrid, Lisbon, and Casablanca and are now heading to Marrakesh before they head back home to Indianapolis. On the bus the meet a man named Louis Bernard (Daniel Gelin), who is friendly but fairly mysterious. While Ben has no problem with him, Jo is suspicious of him. She’s more suspicious when Louis begs off of the dinner he promised them, then shows up at the same restaurant and ignores them completely.

Fortunately (at the time), they encounter another vacationing couple. These are Lucy (Brenda De Banzie) and Edward Drayton (Bernard Miles). They recognize Jo from her days on the stage, and the two couples spend a pleasant meal together, and agree to spend the next day together in the Marrakesh market.

And here’s where everything gets Hitchcockian: there is a scuffle in the market and a man is stabbed in the back. He approaches Ben McKenna and dies in his arms. It’s only after a few moments that McKenna realizes this man dressed as a native is actually Louis Bernard. He whispers that a man will soon be assassinated and that McKenna needs to warn the authorities. Specifically, he is to look for Ambrose Chapell. The McKenna’s go to the police to give a statement and the Draytons return to the hotel with Hank, except that they really don’t. In fact, it’s the Draytons who are planning on an assassination, and now they have kidnapped Hank and are holding him for ransom. The cost? Ben McKenna’s silence as to what Louis Bernard said with his dying breath.

The story, as is evident from the paragraphs above, comes naturally out of the situation. That, more than anything, is the essence of a great Hitchcock film—once the premise is established, the story simply follows the premise to its natural conclusion. The McKennas are caught between their natural desire to do the right thing and their human impulse to do everything in their power to save their son.

It’s a factor of the film that with Doris Day in a starring role, you’re going to have to have some music and opportunities for her to belt out a number or two (and, after all, The Man Who Knew Too Much did win its sole Oscar for Best Song). Fortunately, this is a smart enough script that it works her singing into the plot in such a way that it becomes intrinsic. Having her stage past written into the character gives her the singing credentials, but when it becomes important to the plot for her to sit at the piano, it seems perfectly natural. It’s a great song and a great performance, given that she’s doing it in an effort to locate her kidnapped son. There’s a lot tied to that song, and it works completely. It’s worth noting, in fact, that Doris Day’s performance here is the standout of the entire film. This is a character that has had a son kidnapped and she’s consistently asked to hold it together. She’s perfect as a woman desperate to play it cool and yet also appearing as if she’s ready to jump out of her skin. It makes me wonder why she didn’t get more dramatic roles.

I’m not often a huge fan of child performances from the 1940s and 1950s, since they tend toward the overly broad and equally over-dramatic. Fortunately, Christopher Olsen is pretty good in this. While a little to wide-eyed and precocious, he’s not in it so much that he becomes an annoyance, and even when he is on screen, he’s not too terribly off-putting. It’s also worth noting that Carolyn Jones, best known as Morticia Addams, shows up as one of Jo’s friends in London.

The Man Who Knew Too Much is a good, solid example of Hitchcock’s work. The plot is a fun one, but pretty standard fare for Hitch, making this not quite a disappointment, but certainly nothing unexpected. It’s films like this one that made Hitchcock who he was. It’s also films like this one that have caused me to realize more than ever that for as great as he was at spinning a thrilling yarn, Alfred Hitchcock really told the same story over and over.

Email ThisBlogThis!Share to TwitterShare to FacebookShare to Pinterest
Labels: Alfred Hitchcock, The Man Who Knew Too Much, thriller